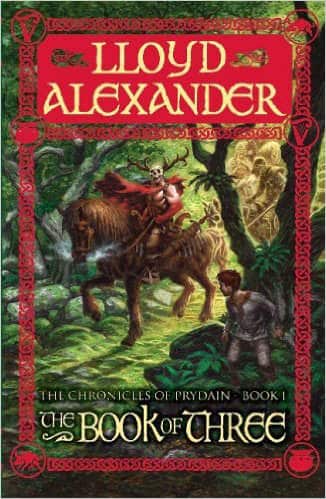 To me, there are some fantasy series from childhood that are just timeless and classic. Tolkien’s The Lord of the Rings and The Hobbit, Susan Cooper’s The Dark is Rising Sequence, Harry Potter (enough said), and CS Lewis’ The Chronicles of Narnia. These all stand out as fantastic. There’s another series of books that needs to be mentioned in this list, however, and that series is The Prydain Chronicles by Lloyd Alexander.

The series is made up of five books published between 1964 and 1968 as well as a collection of short stories (The Foundling and Other Tales), published in 1973. These books are The Book of Three, The Black Cauldron, The Castle of Llyr, Taran Wanderer, and The High King. Inspired by Welsh mythology, The Prydain Chronicles is still a unique and epic fantasy tale that strikes out on its own very quickly.

It’s a classic coming-of-age story, with betrayal, danger, the rising forces of evil, evil’s struggle against good, and an oracular pig thrown in for good measure. The story opens in Caer Dallben, where young Taran is wishing for adventure and that he could do something different with his life. Of course, when you wish for adventure in a fantasy series, you’re sure to find it. Taran is no exception, as Dallben and Coll (who tends to Hen Wen and cares for the garden), try to tell him.

When Hen Wen runs away in fear, Taran runs after her, only to find himself confronted with the army of the Horned King, a warlord who is seeking to rule Prydain. No one knows who the Horned King is, but they suspect that he serves Arawn, the evil lord who rules in Annuvin and can command an army of the undead. See what I mean about “inspired by Welsh mythology?” Some of these words are a bit of a mouthful.

Currently, the Horned King is looking for Hen Wen, the oracular pig, because she knows the way to defeat him. Meanwhile, the brave Prince Gwydion is looking for Hen for the same reason. Being an oracular pig and all, Hen Wen is very important. She’s also adorable in the book and is very attached to her people (especially Taran).

As Taran tries to find and save Hen Wen from the dangers facing a tame pig alone in the wild, he finds himself faced with a world he has only imagined. Joined in his quest by the brave Prince Gwydion, the fiery Princess Eilonwy, the bard Fflewddur, Gurgi, and Doli of the Fair Folk, Taran travels through Prydain. He is both seeking Hen Wen and headed to warn the King that the Horned King is planning an attack, and on the way finds himself faced with choices he had never imagined.

Through the book, new characters are met, both good and bad, and Taran finds himself suddenly appointed the leader of his little band. As all his dreams of adventure begin to come true, he wrestles with the consequences of leadership and the choices he is forced to make.

As a coming-of-age story, it’s solid and fun. True, Taran still has some growing up to do at the end of the story, but he grows significantly through the book (I’m sure his growth will continue in the next few books). As it is, the story feels organic and while sometimes Taran’s actions make you face-palm, he’s still a character you want to root for. He’s trying, and he’s learning.

The supporting characters are also a lot of fun. They all interact and play off of each other in interesting ways, and while the Princess Eilonwy was always my favorite character, the others are just as fun to read about. I’m hoping for more backstory as the series goes on, but I’ve been given enough here to intrigue me. Although there is no romance at this point, Taran and Eilonwy’s relationship is set up as something to watch for. Since they are just kids in this book, this makes sense. Plus, since I like stories where the romance grows out of friendship, I enjoy this progression.

The words just wash over you, painting a picture of the story, and drawing you in so far you can’t put it down.

I also love the way Lloyd Alexander writes, it’s descriptive and the world fits together in a magical way. The best way I can think to describe his writing is that it’s like music. The words just wash over you, painting a picture of the story, and drawing you in so far you can’t put it down. It’s short, sweet, and melodic while still making you believe the stakes are real for this imaginary country and these characters.

Another thing I love about this series is that Alexander includes a detailed map in every story, which I have always enjoyed. He also has a pronunciation guide at the end, which makes me cheer. Like I said earlier, since the series is inspired by Welsh mythology, there are some words that may be a tad different to pronounce. This guide makes things easier.

The Book of Three is a wonderful introduction to a magical land full of adventure, magic, and the challenges of growing up. The coming-of-age story, mixed with the fantasy epic, give us a story that has delighted and captivated readers for decades. If you haven’t read it, The Book of Three might just be a jumping point to a new fantasy series to adore.

I love the Disney animated film The Black Cauldron. I really do. But, here’s the thing. It’s not a very good adaptation of either The Book of Three or The Black Cauldron. The Horned King is just in the first book, and the Cauldron Born are a much more complicated issue in the series. However, this is a series that is very high on my list of books that I would love to see adapted properly. A series of movies would work well as a film would be able to use the special effects necessary to tell the story.

For casting, I picture Taran as Thomas Brodie-Sangster, or maybe Freddie Highmore, with Jane Levy as Eilonwy. Dallben, I pictured as a bearded Ian McKellan (though not Gandalf-bearded), though I think Michael Caine could also be really fun in that role. Finally, Gurgi should be voiced by Matthew Perry. As far as the rest of the cast goes, I’m not sure who in Hollywood right now matches what I imagine for these characters, so I’ll keep thinking and report back!

Who would you cast? Have you read The Book of Three? Did you enjoy it as much as I did? Let me know what you think in the comments!

Our romance-themed entertainment site is on a mission to help you find the best period dramas, romance movies, TV shows, and books. Other topics include Jane Austen, Classic Hollywood, TV Couples, Fairy Tales, Romantic Living, Romanticism, and more. We’re damsels not in distress fighting for the all-new optimistic Romantic Revolution. Join us and subscribe. For more information, see our About, Old-Fashioned Romance 101, Modern Romanticism 101, and Romantic Living 101.
Pin this article to read later! And make sure to follow us on Pinterest.
By Bailey Cavender on April 8th, 2016