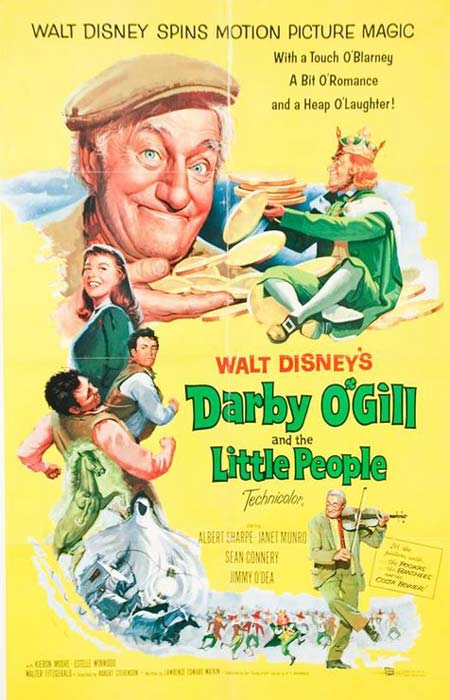 Darby O’Gill and the Little People

In honor of St-Patrick’s Day, only one film seemed appropriate to review on the day of leprechauns and shamrocks: Disney’s 1959 classic, Darby O’Gill and the Little People. This live action film is not as well known as Mary Poppins, but still possesses a special charm and magical plot. 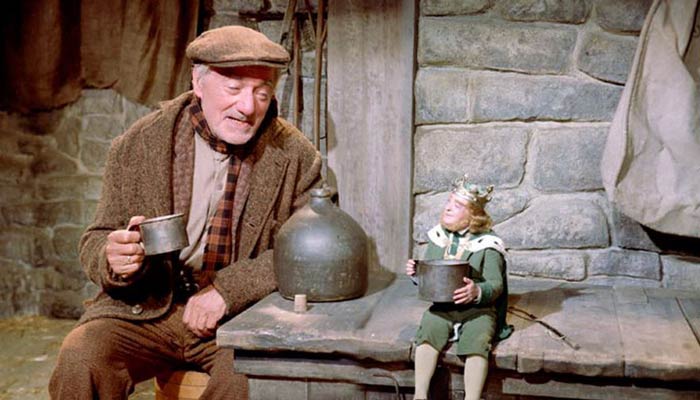 Darby O’Gill and the Little People starred Albert Sharpe, a then well-known Irish stage actor who was praised for his natural, fun filled performance. Janet Munro portrayed his daughter Katie (Munro was a favorite among Disney studios and would make several more films for them over the years). The most famous actor to come from this film was a very young Sean Connery, playing the new caretaker Michael. Connery was still an unknown and his role as the romantic leading man led to more Hollywood roles, including James Bond pictures.

Darby O’Gill is an aging caretaker of a grand estate in a small Irish town where he lives in the adjoining gatehouse with his adult daughter Katie. Darby has begun to shirk his duties as caretaker and spends most of his time in the village pub telling stories of the leprechauns. His favorite stories are about their leader, King Brian, who Darby nearly caught but the little man was too smart for Darby. 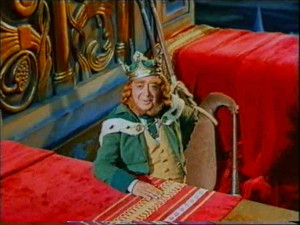 The leprechauns aren’t the only problem for Darby, as the estate owner has decided to retire him and bring in a younger man named Michael to care for his home, while providing a cottage to Darby and his daughter for his years of service. This doesn’t sit well with Darby who knows Katie will be devastated to leave their home. Another obstacle is the town bully, Pony, who mocks Darby’s stories and covets the caretaker job for himself as well as Katie for his wife.

Darby hides the truth from Katie, and while on a nightly stroll with his horse, is abducted by the leprechauns and brought to their hideout. King Brian feels sorry for Darby, who despite trying to capture him for years, has come to consider him a friend. He offers him a home with the leprechauns and tempts him with riches and never ending pleasure.

Darby seems to accept but tricks the king into letting him out and returning home to say farewell to his daughter. King Brian follows, insulted Darby would leave, but accepts a drink and some tunes. The drink turns to many more and by the time morning comes the tipsy leprechaun has lost his powers and realizes Darby has finally outwitted him and must give him the three wishes he has denied him in the past. 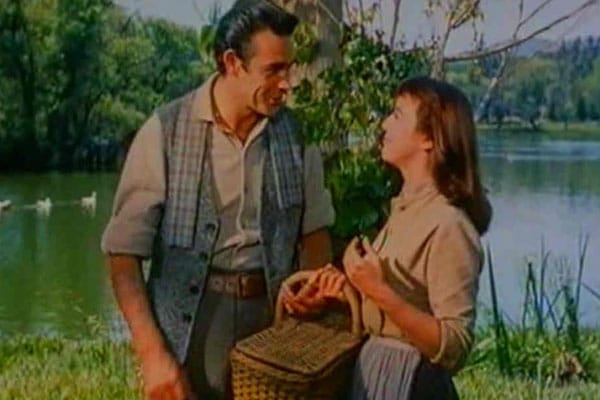 Meanwhile, while Darby ponders the three wishes, Katie and Michael have become attracted to each other and Michael resents having to hide the truth of why he is working with Darby. Pony notices the growing attraction and tries to bully Michael off, first with fisticuffs then by sabotaging Michael’s working reputation.

As Darby considers his wishes wisely, he discovers that even wishes can’t bring about happiness. He teaches his neighbors that a wish can have many strings and that he intends to use his wishes to guarantee a happy life for his daughter.

While this movie was shot mostly in California, many scenic shots were filmed in Ireland to capture the beauty and mystery of the beautiful countryside. It impressed viewers with its fantasy, fun and music. Though not as sought out as other old live action Disney films, it remains a well respected fantasy, not only for its story but the use of Irish terms, traditions and music.

It is considered one of the best lesser known of Disney’s films, and is the perfect film to watch on St-Patrick’s Day with a drink in your hand and a wish in your heart.

Our romance-themed entertainment site is on a mission to help you find the best period dramas, romance movies, TV shows, and books. Other topics include Jane Austen, Classic Hollywood, TV Couples, Fairy Tales, Romantic Living, Romanticism, and more. We’re damsels not in distress fighting for the all-new optimistic Romantic Revolution. Join us and subscribe. For more information, see our About, Old-Fashioned Romance 101, Modern Romanticism 101, and Romantic Living 101.
Pin this article to read later! And make sure to follow us on Pinterest.
By Julia McCracken on March 17th, 2015