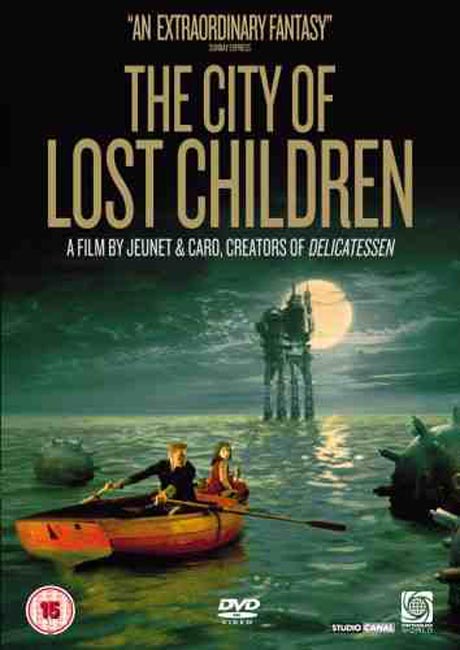 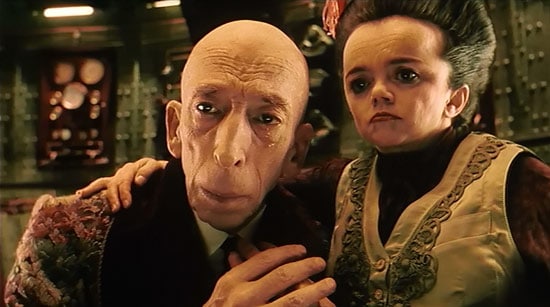 Krank and his unusual family were the product of a series of experiments by a long absent scientist, each of whom have a particular defect. Krank’s design flaw is that despite his great intellect he cannot dream. This has caused him to age far too quickly. He kidnaps children in order to extract their dreams for himself in an effort to become young again. So far it has not gone to plan.

One is a childlike circus strongman played by Ron Perlman. When One’s little brother is stolen he must team up with clever street urchin Miette in order to find him.  The pair must face many dangers in order to find the way to Krank and subvert his evil schemes. 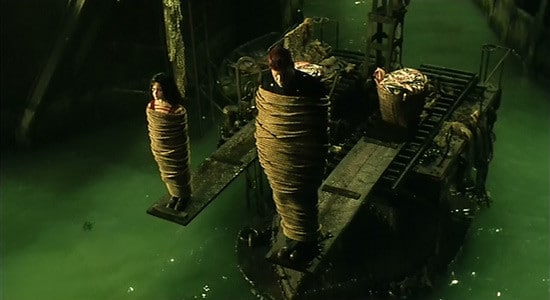 The film is reminiscent in some ways of Metropolis, an early silent film by Fritz Lang which is said to be one of the first Science Fiction films. It did a great deal with drawn backdrops and creative sets. The film uses interesting and bizarre architecture as back drops to the action including most prominently, a disused oil rig  used as a base of operations for Krank’s schemes. Like many steam-punk works, the film cannot be said to be set in any one time, inhabiting a fantastical world with elements of many different eras. It is a unique flight of the imagination with a distinctly European feel. 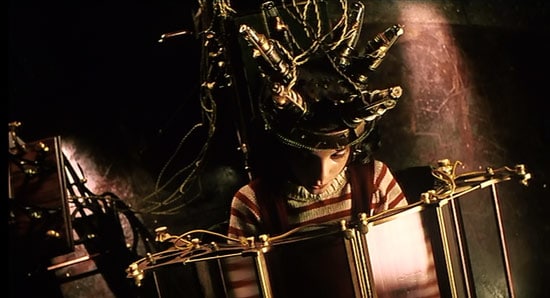 Similar to Amelie, much is made of the use of colour with a strong emphasis on the contrast between green and red. This gives the film an eerie and magical look which matches the soundtrack perfectly.  Much like the world, the costumes are quite stylised and were actually provided by Jean-Paul Gaultier. 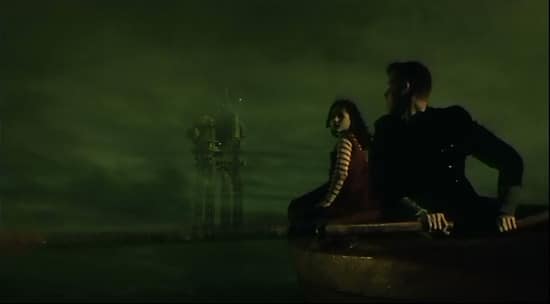 This is a world filled with interesting and unusual characters, though the acting can tend a little toward the theatrical.  However, much like the films of Tim Burton, this can be seen as being part of the tone of the piece. Much commendation must go to Judith Vittet who played a resourceful young Miette. Also to Dominique Pinon who plays seven different characters that frequently appear in scenes together, seamlessly.  Ron Perlman is also quite endearing as the innocent One.

Like many film journeys, there is not so much a plot as there is a sequence of events that leads the main characters to their final destination. This does not appear contrived though, more like a meditation on little actions causing greater ones and changing destinies. This also appears to be due to the style of the director.

In short, it is a delightful and bizarre journey filled with unusual situations, places and people.It takes elements of science fiction, steam-punk, fairy tale and the surreal to create a captivating and unique world. 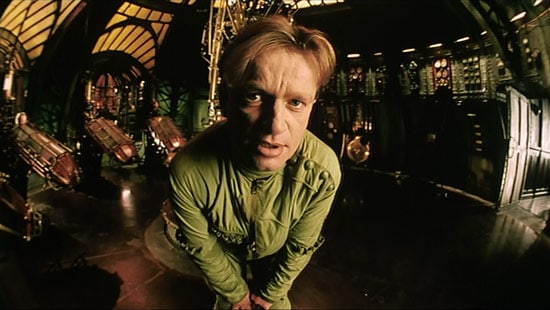 Content Note: Though this film is rated R there is very little that might deserve such a rating.  There is some violence, though nothing too out of place in an adventure film.  There are two uses of mild profanity and a very short scene where several women run from a fire alarm, one of which is topless.  Another character smokes a hookah pipe at one point.

Our romance-themed entertainment site is on a mission to help you find the best period dramas, romance movies, TV shows, and books. Other topics include Jane Austen, Classic Hollywood, TV Couples, Fairy Tales, Romantic Living, Romanticism, and more. We’re damsels not in distress fighting for the all-new optimistic Romantic Revolution. Join us and subscribe. For more information, see our About, Old-Fashioned Romance 101, Modern Romanticism 101, and Romantic Living 101.
Pin this article to read later! And make sure to follow us on Pinterest.
By Elinor Cackett on August 12th, 2015