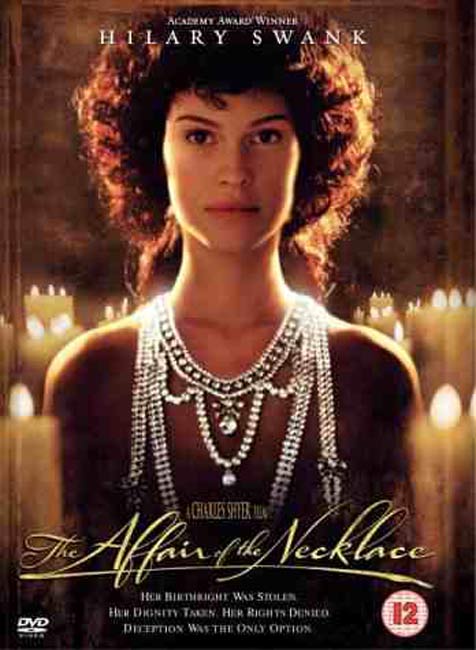 The Affair of the Necklace (2001) is a period drama about the intrigue surrounding a famed diamond necklace, a necklace which supposedly played a part in the lead up to The French Revolution. The necklace had been commissioned by the previous king for his mistress, Madame Du Barry. However, he died before its completion and Du Barry was banished from court, leaving the jewelers deep in debt. Attempts were made to convince Marie Antoinette to buy it, but knowing its origin she refused.

Jeanne De La Motte-Valoire is the protagonist. Her family fell into disgrace after voicing unpopular political opinions. Jeanne’s one wish is to claim back her family name and property. She has thus far been unsuccessful, that is until she meets the charming gigolo Retaux de Villette who is skilled with court matters. Together, they undertake a great deception involving the ambitious Cardinal Rohan, Marie Antoinette and the infamous diamond necklace.

While the film is based on real people and situations, historical events were skewed for the sake of making Jeanne more relatable. This was not necessary as the real Jeanne was interesting enough to carry the story, regardless of likability. The film is a little indecisive as to whether we are supposed to see Jeanne as the victim or the criminal mastermind. Swank’s performance fluctuates between the two interpretations. I think, however, that it is ultimately the director to blame for this inconsistency.

While Swank’s performance was well-acted and entertaining, her changeable accent was a little distracting. The other actors played their parts well. Simon Baker is entertainingly witty and charming yet chose to also play Retaux with a much needed vulnerability. Jonathan Pryce is delightfully menacing as the vile and dangerous Rohan making his part in the deception all the more amusing. Christopher Walken is his usual self which works as he plays a man considered strange in his own time period; Count Cagliostro, mystic and rumoured head of the Illuminati. Joely Richardson is also good as the comically oblivious yet sharp Marie Antoinette.

It is a bawdy adventure, filled with high stakes, hilarity and drama. The film has a wicked sense of humour, most of it taking the form of the Count De la Motte, Jeanne’s husband played by Adrien Brody. And of course there’s romance. The love story between Jeanne and Retaux is charming and sweet (despite being a little predictable), which makes its doomed nature all the more tragic.

The other aspects of the film were also strong. The costumes are glorious, vivid and true to period. A notable inclusion on the soundtrack was Mercy from The Prayer Circle by composer Jonathon Elias featuring Alanis Morrisette. It is an emotional, yearning piece in Hungarian that should be entirely at odds with the tone and period of the film and yet fits perfectly. The raw emotion of the song speaks to the deeper emotions of the film.

What I most enjoyed about the film was not just the romantic action, reminiscent at times of Dumas, but also the chemistry and wit between the main conspirators. While the conclusion is powerful, nothing is truly achieved.

This is not a film driven by facts but by emotion and storytelling. It is entertaining and having recently seen Marie Antoinette, it was interesting to see the same incident from two very different perspectives. The film is enjoyable as a story but if you wish to learn more about the real incident it would be better to try another source. If, however, you seek a film about deception, intrigue and justice, this may well be the film for you.

Our romance-themed entertainment site is on a mission to help you find the best period dramas, romance movies, TV shows, and books. Other topics include Jane Austen, Classic Hollywood, TV Couples, Fairy Tales, Romantic Living, Romanticism, and more. We’re damsels not in distress fighting for the all-new optimistic Romantic Revolution. Join us and subscribe. For more information, see our About, Old-Fashioned Romance 101, Modern Romanticism 101, and Romantic Living 101.
Pin this article to read later! And make sure to follow us on Pinterest.
By Elinor Cackett on May 22nd, 2015