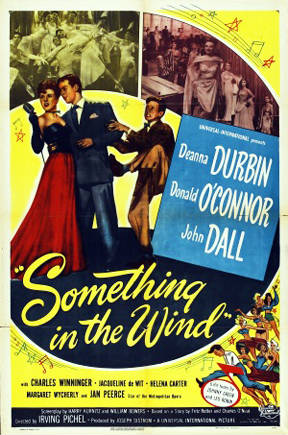 Classic films aren’t my usual form of cinematic entertainment. Sure, I like them well enough and even have favorites among them, but due to the leaps made in the production of films, I lean towards the films of this generation. That doesn’t mean now and again I cannot appreciate a black-and-white picture. Recently, I began re-watching my DVD set of screen legend Deanna Durbin’s films. She’s an actress – known best for her songbird voice, who made a splash for about ten years in the movie business. I’m not sure how popular she is in terms of longevity or in comparison to the likes of say Judy Garland, but in her day, she was one of Hollywood’s best paid actresses.

In this 1947 romantic comedy, Deanna plays Mary Collins, a struggling disc jockey in need of a sponsor. When she’s approached by Donald Read with an offer to pay her off due to the supposed “relationship” she had with his grandfather, Mary’s outrage at the upper class knows no bounds. Unbeknownst to the Read’s, Mary isn’t the woman they think she is. She had no relationship with the Read patriarch, though Donald doesn’t seem to care what her story is. Instead of listening, he recruits his cousin Charlie to kidnap Mary. All it takes is one conversation with Mary for Charlie (played by O’Connor) to realize that the young Mary isn’t his grandfather’s lover. With his help, Mary sets about turning the tables on the troublesome family. 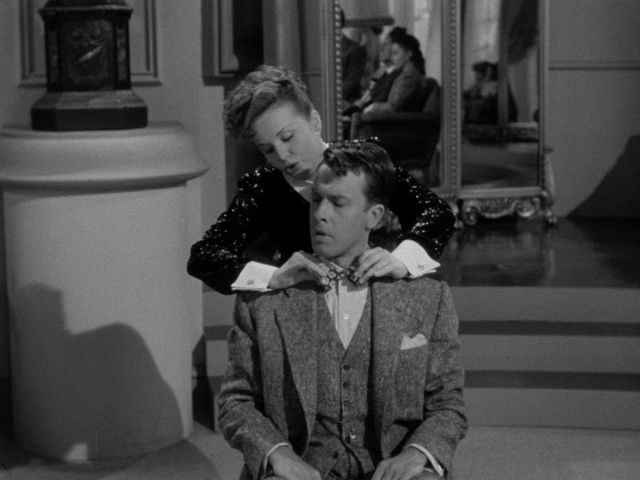 Some cursory reading reveals this wasn’t one of Deanna’s best loved films. I actually think it is one of her most entertaining for a variety of reasons. Sure there is a typical case of insta-love (cue the bands, a love song is all it takes for this couple to fall in love), but its best asset is the humor. I love watching these “proper” comedies and discovering just how spirited and sassy they really were. As one of her last films, this one has the appeal of putting Deanna in the unique role of a disc jockey and as an independent woman. Most of her roles were constricted either because she was a ward of a character or because the actress was too young for anything more than chaste romance. Something in the Wind was one of her best roles in which she played an adult, and it felt different too. The character’s personality is saucier and she is quite the tease because of this. There was a lot of room to “play” with the character and it makes for a crazy 90 minutes just to watch her try and make Donald’s life miserable while trying to extract a half a million from him. 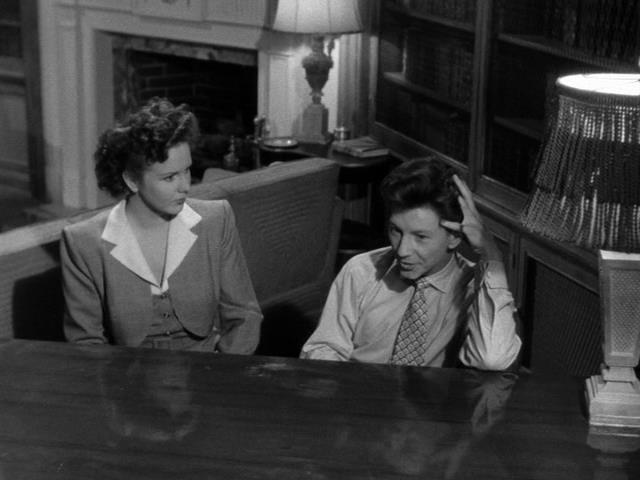 Some random and fun facts about this film: This was Donald O’Connor’s first film role in two years following his military service. His one big number, “I Love a Mystery” is one of the most famous tunes from the film. Understandable given all the crazy, high-energy effort the number involves.

This film was originally titled For the Love of Mary, but was instead used at a later date which ultimately became Deanna’s final film when she disappeared from Hollywood for good. After two failed marriages, Durbin did indeed go into seclusion until her death.

Durbin certainly left her mark on the film industry and I know her films are some of my favorites from the golden age of cinema. It’s been enlightening to re-watch them all as an adult. The humor is one of the best things about this era and of course, watching a star who had played the “sweet, wholesale” character get some saucy one-liners was even more fun.

Something in the Wind has a catchy story with a set-up that works brilliantly. Though the ending isn’t all it could be (it fell very flat considering the rest of the film), the getting there is no less memorable. There’s mistaken identity, a stint in jail, a non-existent baby and a young Donald O’Connor. That and more combine to make this breezy comedy easily one of my favorites and one any classic film buff should look into seeing.

Have you seen this film? What are some of your favorite comedies of this era?

Check out more of our Film Reviews

Our romance-themed entertainment site is on a mission to help you find the best period dramas, romance movies, TV shows, and books. Other topics include Jane Austen, Classic Hollywood, TV Couples, Fairy Tales, Romantic Living, Romanticism, and more. We’re damsels not in distress fighting for the all-new optimistic Romantic Revolution. Join us and subscribe. For more information, see our About, Old-Fashioned Romance 101, Modern Romanticism 101, and Romantic Living 101.
Pin this article to read later! And make sure to follow us on Pinterest.
By Rissi JC on January 16th, 2015