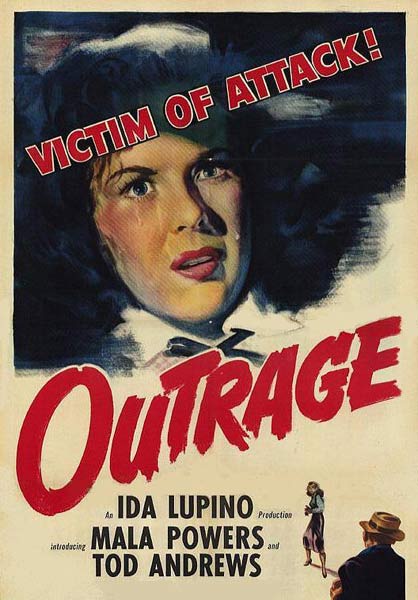 One of the things I adore about classic movies is how contemporary viewers can immerse themselves in the time period of the film, the clothing, the dialogue, the scenery, even the morality. When Outrage was released in 1950 it was both controversial and remarkable for being one of the earliest post-Production Code Hollywood films to deal directly with the issue of rape. This film was also directed and written by Ida Lupino, a pioneer of women filmmakers. Needless to say, I was intrigued.

Outrage tells the story of a young woman named Ann who in the beginning of the film is engaged and is ready to quit her job as a factory bookkeeper. However, on the eve of her last night, she is raped. Shortly after her attack, Ann flees to some place where no one knows who she is or knows about her attack. The film then deals with the emotional, psychological and societal repercussions of the sexual attack. There are many things to admire about this film. For one, it was quite influential in the film noir genre, with its encroaching shadows and distinctive angular camera shots that are now associated with the genre. Possibly one of the most viscerally memorable parts of the film is the attack. Lupino alternates between high and low angle shots as Ann darts through deserted alleys and the tension continues to build as her predator gets closer and closer. I really like how the topic of sexual assault is handled in the film. Sexual assault is common and the attackers are thrown in jail but not for very long. The police investigation following Ann’s attack is almost like a second assault because the victim must go through the interrogation and relive the traumatic experience. Ann is almost treated like a criminal herself and this is illustrated brilliantly when Ann is lying down in her bed and looking through the bars that make up the headboard, similar to a cage.

There are some people who tell Ann that the incident is in the past and she should just forget about it. Ann constantly works, either at the orange factory or bookkeeping to keep her mind off her old life and her attack. The film presents the repercussions as serious and tragic, something that the victim cannot escape. Throughout the film the gravity of rape is expressed even though it is never directly spoken of. Ann’s father says to the policeman after Ann returns home: “Tonight my daughter was brutally attacked. Why don’t you do something about preventing crimes like these? Is this why you raise a daughter? Is this what you love and sacrifice for? What kind of times are these that such things can happen? Only this morning she was carefree and happy and now…” This moving speech from a devastated parent perfectly illustrates his feelings and the much larger social issue all women face in 1950s America. I also like how the film complicates the “marriage plot,” which is the genre from literature and film in which the female protagonist’s quest is to find love. The film complicates the “marriage plot” by having the protagonist refuse to marry or be involved with anyone. The film’s focus instead is on Ann’s path to recovery and her need to regain her identity and take control.

Though there are several characters in this film, there are only two central characters that are likable and well defined. Ann Walton is the kind, girl-next-door bookkeeper at a factory. After she is attacked however, Ann transforms into an almost completely different person which is understandable considering what happened to her. Ann no longer feels safe walking to and from work as evident by her wide eyed expressions and nervousness. The noises of her workplace she once found familiar are now unnerving and put her on edge. She also faces various reactions to her attack from whispers and stares from other women in the neighborhood to compassion and curiosity from her coworkers. The looks she receives from women and men are scrutinizing and controlling the way she feels about her body. Another conflict she faces is with her fiancé who still loves her and wants to marry her. However, Ann no longer wishes to marry him because she “feels dirty.” Internally she feels unworthy and shamed. She does not want to be with any man now because “everything is dirty.” Ann no longer feels like she is the same woman she was before, like a shell of her former self. This is nicely symbolized in the scene of Ann destroying a photo of herself that was taken prior to her attack. I personally felt very sympathetic toward her, I wanted to follow her on her journey and I wanted to see her heal.

Ann no longer feels like she is the same woman she was before, like a shell of her former self.

Then there is Bruce Ferguson a World War II veteran who rescues Ann after she had passed out on a deserted road and leaves her in the care of a family of kind fruit farmers. Though Bruce is a minister, he still struggles with his own war-induced demons. In one scene when Ann and Bruce are overlooking the county side, Bruce tells Ann “everyone goes through dark times,” and he tells her about his past service in the war and how he lost faith. Interestingly, parallels can be made with the traumatic experience of war and the traumatic experience of rape. What makes them similar is the adrenaline and fear that results from being hunted/preyed upon and how being in such a state for long periods of time chemically alters the brain. Ann and Bruce forge a friendship of understanding and comradery, one that I really enjoyed watching. To Lupino’s credit, she did not take the easy route with their relationship and conveniently write them as intimate or romantic. The bond between Ann and Bruce is genuinely based on their mutual need for healing, compassion and empathy.

Personally, I feel that Outrage is an important film to see and it is a good conversation starter with several feminist elements that can be analyzed and dissected. Ida Lupino has earned my admiration for directly addressing the consequences of a rape in a major motion picture and doing so with cinematic flare and imagination.

Our romance-themed entertainment site is on a mission to help you find the best period dramas, romance movies, TV shows, and books. Other topics include Jane Austen, Classic Hollywood, TV Couples, Fairy Tales, Romantic Living, Romanticism, and more. We’re damsels not in distress fighting for the all-new optimistic Romantic Revolution. Join us and subscribe. For more information, see our About, Old-Fashioned Romance 101, Modern Romanticism 101, and Romantic Living 101.
Pin this article to read later! And make sure to follow us on Pinterest.
By Moriah Burbank on January 31st, 2015