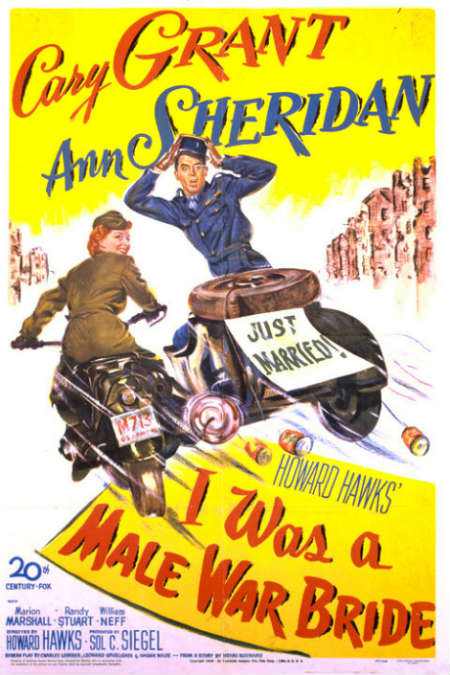 I Was a Male War Bride is one of four collaborations between director Howard Hawks and Hollywood star Cary Grant. Interestingly, this film is based off a true story; that of a Belgian man named Henri Rochard who married an American nurse. Also, despite the comedic nature on screen, things were not so pleasant and humorous behind the scenes. During production, many of the cast and crew suffered a variety of illnesses.[1]

Hawks broke out in hives. Grant’s co-star Ann Sheridan had pleurisy that developed into pneumonia which resulted in production being halted for two weeks. Sheridan also accidentally ran over a goose on a motorcycle that did not get out of the way fast enough. Grant fell ill with hepatitis that was later complicated by jaundice. Production was not able to continue for three months and only after Grant had regained thirty pounds. [1]

The film was a massive success, grossing $4.5 million at the box office. This made it the third highest grossing film of 1949. The film was also the third highest grossing movie of Howard Hawks’s career.[2] The success of the film seemed to have made all the trouble worth it, both for the director and the actors. I was excited to see the film as I enjoy screwball comedies and was in need of a good laugh. I was confident this film would deliver.

I Was a Male War Bride takes place shortly after World War II in Europe. It is about a French officer named Henri Rochard. He is partnered with a female, American lieutenant named Catherine Gates. As the two are on their mission, they finally acknowledge their feelings for each other and marry soon after. However, they discover that the only way to get Rochard to the USA is via the War Brides Act, but there are no provisions for war grooms. As one can imagine hijinks ensue.

The film tells its story at a realistic pace and the events that befall Henri and Catherine remain amusing without becoming too over the top. Once they marry, the film really picks up in its story and I found myself drawn into what would happen next. Since I am personally not an expert in military life and sleeping arrangements, I was not entirely sure where the film was going, which made the climax all the more enjoyable. I really adore most kinds of movies, but I adore them even more when they can take me by surprise.

One thing that I did notice about the film, however, is that the writers, the cast, and Hawks are so focused on the laughs that characterization consistency falls by the wayside. For instance, Henri is a French officer but he is quite familiar with American slang. Yet later on in the movie he has difficulty saying “Massachusetts.” I am certain detailing of his background could have cleared this up. As a result, the film does not penetrate deeper emotions, but at the same time it is supposed to be a light-hearted film and it does what it is supposed to do well.

I Was a Male War Bride is considered a screwball comedy. What gives a film that genre is how it utilizes romance and comedy. Screwball comedies are usually romantic with the principle characters not looking for love. In some instances, there are circumstances that prevent the main characters from forming a romantic relationship. These characters will not always or immediately get along. On the contrary, their contrasting personalities are one of the key aspects of a screwball comedy as their mismatched nature is one of the sources of comedy.

To work around and past the censorship, the comedy is a mixture of innuendos, euphemisms as well as quirky, farcical humor. Slapstick, wordplay and unusual circumstances that happen to the characters are also common of these films. I Was a Male War Bride fits this genre perfectly. The main characters do not get along, they bicker constantly and their witty banter consistently made me smile and laugh. Also, neither one is looking for love. Bizarre things happen to both of them throughout the film and their responses to these events bring even more humor to the scenes. The slapstick comedy is mostly done by Grant who seemed to have done his own stunts. One I particularly enjoy involves Grant being lifted up by a railroad-crossing gate.

The characters are not the most complex or layered. However, I still found the main two characters fun to watch. Henri Rochard is a slightly cranky but charming French officer. He is a stern man and does not laugh very often. He also has a bit of a temper. He takes his job seriously and is determined to complete his last mission for the army. He is a proud Frenchman and sometimes the oddities of American rules and names baffle him such as the excessive red tape. Personally, I felt rather sorry for him as he found himself in uncomfortable situation after uncomfortable situation. These situations included emotional and physical such as awkward moments between him and Catherine and having to sleep in a chair. Though he does not complain often, except when appropriate to annoy Catherine. Only after he confessed his feelings to Catherine did the audience see a gentler side to him. He even smiled and laughed more often.

Catherine Gates is fiery, sassy and always speaks her mind. She enjoys having fun and goofing around, often at Henri’s expense. She enjoys getting the job done, both in her military and personal life, in unconventional ways and will often think outside the box. She is not above bending the rules. She also enjoys pressing Henri’s buttons just to get a reaction out of him. She knows how to handle tough situations and she often remains calm under pressure. Only after she confessed her feelings to Henri did the viewers see her even more playful and flirty side. Personally, I really like her character; she is strong and can hold her own in a fight of muscle and wit but still retain her femininity. I also like how she can show her vulnerability. I felt sympathy for her as she too is put in uncomfortable, but still humorous, situations.

The romance, I think, is quite enjoyable and it balances out with the humor nicely. The leads know each other and have worked together in the past but seem to barely stand each other. I think the transformation of their relationship is wonderfully written and built up over a period of time. I think the subtle hints of their deeper romantic feelings for each other, including the constant bickering, are quite adorable. Their sly and witty banter back and forth never ceased to amuse me all throughout the film. I also like how even after they married they still made jabs at each other, albeit in a more playful way. In the film, they are equals and I appreciate that. At one point, they swap gender roles, in a way, which I find to be rather interesting and adds another layer to their relationship.

Overall, I really liked I Was a Male War Bride. It is an enjoyable screwball comedy with a good balance of humor and romance. With its likable characters, historic setting and heart, it is no wonder why this film is as highly regarded as it is, even by a few of the cast members. I suppose this film can be used to illustrate how neither pneumonia, hives nor a deceased goose can rain on the parade of a comedy film.

Our romance-themed entertainment site is on a mission to help you find the best period dramas, romance movies, TV shows, and books. Other topics include Jane Austen, Classic Hollywood, TV Couples, Fairy Tales, Romantic Living, Romanticism, and more. We’re damsels not in distress fighting for the all-new optimistic Romantic Revolution. Join us and subscribe. For more information, see our About, Old-Fashioned Romance 101, Modern Romanticism 101, and Romantic Living 101.
Pin this article to read later! And make sure to follow us on Pinterest.
By Moriah Burbank on August 9th, 2015

2 thoughts on “Vintage Film Review: I Was a Male War Bride (1949) – A Saucy Romantic Comedy with Slapstick”