Johnny Case is a self-made man who has been working since he was a child. On his first vacation in years, he meets and becomes engaged to the beautiful Julia Seton. Johnny is thrilled to have met a woman who he believes shares the same outlook on life as he does. Upon his return, he boasts of his luck to his good friends the Potters, before going to meet Julia’s family.

He is surprised when the taxi delivers him to a Fifth Avenue mansion. Thinking Julia must be employed by the owners, he goes to the back entrance. He experiences a further shock when he discovers that his new fiancée is one of THOSE Setons. Fabulously wealthy, socially connected, even their servants are haughty.

Johnny meets a kindred spirit in Julia’s older sister. Linda is chafing against the expectations and strictures of wealth and family expectation. She is thrilled with Julia’s choice of husband and offers her support for the couple in the face of Mr. Seton’s displeasure over their match.

LINDA -What’s the use of having all this jack ($$) around if it can’t get us a superior kind of man?

Johnny and Julia wish to quickly tie the knot. But it doesn’t take much time to discover that Julia sees the world more like her rigid class-conscious father than her free-spirited fiancé. When Johnny expresses his desire to take time off to discover the meaning of life, things come to a head.

JOHNNY: I want to save part of my life for myself. There’s a catch to it though, it’s gotta be part of the young part. You know, retire young, work old, come back and work when I know what I’m working for, does that make any sense?

Holiday is one of three films Cary Grant and Katharine Hepburn made with director George Cukor. It is also the third of four films Grant and Hepburn starred in together. The story is based on a play by Phillip Barry and adapted for the screen by Oscar-winning screenwriter Donald Ogden Stewart. With such luminaries of classic cinema collaborating on this film, it is no surprise that it is a masterpiece, albeit an underrated one. (This team of artists worked together again the following year on The Philadelphia Story.)

Of course, the acting cannot be faulted. Hepburn gives an understated performance as the oldest sister who realizes there is much more to life than what money can buy. She acts somewhat like the wise mother figure to Julia and their younger brother Ned.

In some of her other films, Hepburn could come across as abrasive, overplaying her dramatic roles as strong women ahead of their time. But here her strength is quiet. She is wistful and vulnerable as she recalls happier times with her siblings. Unlike Julia, Linda understands Johnny and admires him. He represents freedom and individuality in her world of strict conformity.

RELATED: Top 5 Katharine Hepburn Lines to Use in Real Life

LINDA: Compared to the life I lead, the last man in a chain gang thoroughly enjoys himself.

Johnny Case is an interesting role for Cary Grant. His onscreen persona is one of sophistication and debonair humor. While Case displays that charming ability to laugh at life, he is not one of Grant’s upper class leading men. Cary Grant is a male fashion icon thanks to his flawless sartorial sense, but Case is a man of modest means. It is one of the few times Grant’s onscreen wardrobe lacks perfection. Case’s ill-fitting, rough textured suits are a reflection of his character and a perfect contrast to the sleek, perfectly tailored clothes the Setons wear with indifference. The sense of humor paired with the everyman role of Johnny Case is unique in Grant’s filmography. Another highlight of Holiday is that it gives Grant and Hepburn the opportunity to show off their natural acrobatic skills in a fun scene in the Seton family playroom.

One of the more fascinating performances in Holiday is that of Lew Ayres as the youngest sibling, but only son of the Seton family. If Linda resists conforming to the Seton mold, Ned has completely given up the fight. He doesn’t have the strength to stand up to his father and reluctantly allows Mr. Seton to bully him into a life that leaves him empty. Ned deals with his hopeless situation by drinking. He is a weak character with a penchant for moroseness. Like Hepburn, Ayres gives a brilliantly underrated performance as the perpetually drunk Ned who shows brief flashes of true love and understanding towards Linda.

NED: You’re twice as attractive as Julia ever thought of being. You’ve got twice the looks, twice the mind and ten times the quality. You could charm a bird off a tree if you would, and why not? If you were in her way she’d ride you down like a rabbit. 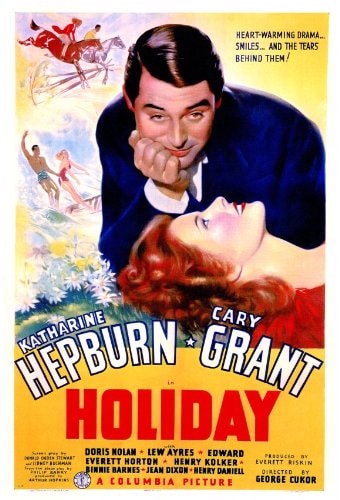 Of course, strong supporting performances further strengthen Holiday. Binnie Barns, Henry Daniell, Jean Dixon and Edward Everett Horton are staples of classic cinema. The latter two give a genius comedic performance as Johnny’s friends the Potters. Fans of classic film will recognize popular character actor Everett Horton from the Ginger Rogers/Fred Astaire musicals. While he remains funny in Holiday, he is not the bumbling idiot of the Rogers/Astaire films. While others may disagree, I think perhaps this is his best role.

The most interesting thing about Holiday is how it raises the discussion of wealth. In the Depression era, most films either glorified the wealthy and their lifestyles or demonized it. But Holiday does neither. What it does do is make the argument that wealth and its’ privileges can be just as detrimental to the rich as to the poor whose lack leaves them less potential and opportunities. Johnny, Linda and Ned recognize that money can become a prison instead of a gateway to freedom. This is contrasted with Mr. Seton and Julia’s outlook of desiring money for the sake of prestige and power while remaining unaware that they are missing out on the most important things in life -happiness, peace and freedom of expression. Johnny’s introduction to the Seton family acts as the catalyst for all of them to take a deeper look at what is truly valuable.

LINDA: The reverence for riches. Look out for that, Johnny.

Holiday is a quiet, underrated masterpiece which deserves to be better known. The nuanced performances by its’ iconic actors and its subversive perspective on wealth make it one which is still relevant today.

Where to Watch: DVD, rent/buy GooglePlay and iTunes.

Content Note: Aside from Ned’s alcoholism, this film has no other objectionable material.

Have you seen any of Cary Grant and Katharine Hepburn’s pictures together? Which one is your favorite?

Our romance-themed entertainment site is on a mission to help you find the best period dramas, romance movies, TV shows, and books. Other topics include Jane Austen, Classic Hollywood, TV Couples, Fairy Tales, Romantic Living, Romanticism, and more. We’re damsels not in distress fighting for the all-new optimistic Romantic Revolution. Join us and subscribe. For more information, see our About, Old-Fashioned Romance 101, Modern Romanticism 101, and Romantic Living 101.
By Brittaney B. on December 7th, 2017