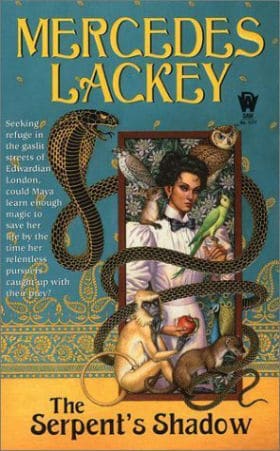 The Serpent’s Shadow is one of those books I had sitting on my shelf for some time and never picked it up. This situation was made all the more silly by the fact that I had purchased this book; it wasn’t given to me! When I finally did read it, The Serpent’s Shadow became one of the books I return to time and time again. Mercedes Lackey has a wonderful ability to create worlds that have a vivacity that leaps off the page and this novel is no exception.

Maya Witherspoon is a doctor, but because she is half-Indian and half-British, she has few friends in Edwardian London, where she has sequestered herself from her native India. She has left the land of her birth after both of her parents are murdered under mysterious circumstances — her father from a snake bite and her mother from an unknown sickness. Maya cannot quite comprehend what killed her parents, but with her mother’s dying wish for Maya to learn the magic of her father, Maya leaves India and departs for London.

Maya has the gift of magic from both of her parents, but having never been trained, she lacks the abilities to fully use her powers.

When Maya arrives in London, she takes up residency at a hospital that caters to the poor and working class. Maya knows that she will be of better use there than trying to make her way in a more prominent hospital. Still, it is not without its difficulties from chauvinistic doctors who make up the majority of the staff. Maya also runs a private practice in her own home, and once word of mouth gets around, she is able to have a small clientele of patients.

However, she is on the radar of a group of Elemental Masters, who send one of their own to see how powerful she really is. Peter Scott is a water master, and a sea captain by trade, though he owns a small shop selling pieces to the public. When he arrives at Maya’s practice, he is uncertain of what to expect. Under false pretenses, he claims an old injury is giving him problems. But Maya is smart, and notices something about Peter, even if she can’t quite feel the presence of his power. Peter realizes that she is not working with evil forces and that she might want to learn how to maintain her magic, and so he offers to help her. His group of masters is all male, and would not permit a woman in their midst — no matter how powerful — so Peter decides to give Maya lessons himself. He understands that she might have a stronger hold on her powers than he can help her with, but he assumes that he can at the least help her to get started. Maya has a power over earth elements and picks up Peter’s lessons quickly.

Maya’s valet Gupta, who has lived with the family for years, and whom Maya can completely trust, thinks Peter teaching Maya is a good plan. One night, he decides to tell Maya information about her past, that might help her future. He lets on that Maya’s aunt, her mother’s sister, Shivani, also has magic, but unlike Maya’s mother, her aunt used her magic for evil purposes, and that she might be looking for Maya in London. With this news, Maya wonders what motives her aunt may have for seeking her out. It is revealed that her aunt is in London, with the full intention of killing off the entire country, her niece included.

A priestess of Kali Durga, Shivani is ruthless in her quest to fulfill her desire for the death of the people who have for so long ruled her country of India, and to take Maya’s power to use as her own.

As Maya continues her studies with Scott, one of her patients at the hospital is attacked by his master’s dog and left to die. When Maya investigates, she discovers that there is more happening with magic, the elite class of society, and her aunt than she could have ever realized.

The writing is great here, with plenty of historical points that are woven through the plot, such as Maya and her friend Amelia marching in a suffragette protest. Lackey does take some liberties with the story, but as it is set in a fantasy world, albeit based off of a real time period, the slight inconsistencies are not distracting. The romance between Maya and Peter is very quiet, built on a foundation of friendship and trust, which I really appreciated! Maya is by no means a damsel in distress and is capable of taking care of herself — which might bend the rules a little in this time period. Peter sees Maya as his equal, and most of the time, as much more adept than he is, and together they make a good pair!

What I enjoyed about this novel is that though this has elements of the Snow White fairy tale, the story is self-contained enough that readers may not even see the Snow White influence (which is exactly what happened to me upon my first reading!). For readers who want more novels with a similar feel, Lackey’s Elemental Masters series has a variety of novels, all based off of familiar fairy-tales.

CONTENT WARNING: Some violence on and off the page, descriptions of Maya’s patients in the hospital (no more than what would be discussed in health class), and mild language.

This is a perfect film for the big screen! Edwardian London would look dreary and gloomy and with the magic elements as contrast, it would appeal to fans of the television series Penny Dreadful or the recent film Crimson Peak. For casting, I’d place Priyanka Chopra (TV’s Quantico) as Maya. Priyanka has a great range for her character Alex on TV, and I think she could bring some of that butt-kicking action to Maya’s role, which, is decidedly much more demure, but just as strong! For Peter, I would cast Scott Patterson (Gilmore Girls), who would bring Peter’s rugged quality to the character but also show the character’s softer side too (much like Luke)!

Have you read The Serpent’s Shadow? What are your thoughts on this book? Let me know in the comments!

Our romance-themed entertainment site is on a mission to help you find the best period dramas, romance movies, TV shows, and books. Other topics include Jane Austen, Classic Hollywood, TV Couples, Fairy Tales, Romantic Living, Romanticism, and more. We’re damsels not in distress fighting for the all-new optimistic Romantic Revolution. Join us and subscribe. For more information, see our About, Old-Fashioned Romance 101, Modern Romanticism 101, and Romantic Living 101.
Pin this article to read later! And make sure to follow us on Pinterest.
By Clarissa Hadge on July 29th, 2016