In celebration of the upcoming season 2 of Victoria on Masterpiece on PBS, St. Martin’s Press was kind enough to provide a free copy for a giveaway of their newly released book – which is the official companion book for season two. But before we get to the giveaway, let’s take a quick peek at what to expect this season.

Jenna Coleman (Doctor Who) returns for a new season as the young queen who wants it all—romance, power, an heir, and personal freedom. Joining the cast in the new season is legendary actress Dame Diana Rigg (Game of Thrones), who plays the Duchess of Buccleuch, the court’s new Mistress of the Robes. Tom Hughes reprises his role as the queen’s dashing consort, Prince Albert, and Rufus Sewell returns as the smoldering Lord Melbourne.

Now, let’s take a look at the official companion book to the second season! 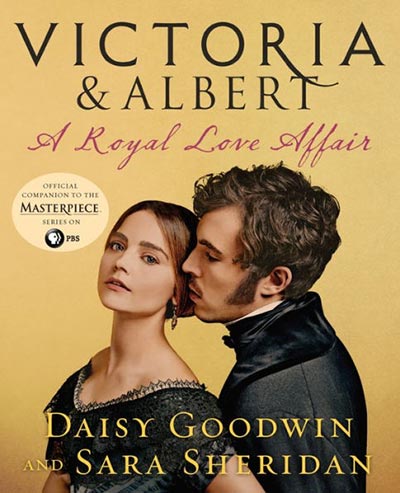 The official companion to the second season of the PBS/Masterpiece drama Victoria by award-winning creator and screenwriter Daisy Goodwin.

More than 16 million viewers watched the first season of the Masterpiece presentation of Victoria, created and written by Daisy Goodwin―the highest-rated PBS drama in twenty years, second only to Downton Abbey. But what happened after the Queen married her handsome prince? Did they live happily ever after, or did their marriage, like so many royal marriages past and present, fizzle into a loveless round of duty?

This all-new companion book by Daisy Goodwin and Sara Sheridan transports us to the private world of Victoria and Albert. Though first cousins, they could not have been more different: Victoria was impulsive, emotional, and capricious, Albert cautious, self-controlled, and logical. But together they forged a bond with each other and with their people that would change the world. Drawing on letters and diaries and fresh insights into royal history, this gorgeous book charts the constant ebb and flow of power within the couple’s surprisingly ardent and modern marriage.

Sumptuously illustrated and full of rich insider detail, Victoria & Albert takes us behind the scenes of the magnificent TV drama, including fascinating, in-depth information on the actors, the props, and the costumes – and bringing an extraordinary royal marriage even more fully to life.

Want a chance to win this amazing new official Victoria book? Then make sure to enter the Giveaway above. Then check back next Sunday on the day of the premiere to see who the winner is! We’ll also announce the winner on Facebook and Twitter and will send the winner a personal email! Good luck!

Featured Image at top: Shown from left to right: Jenna Coleman as Victoria and Tom Hughes as Albert. Credit: Courtesy of ©ITVStudios2017 for MASTERPIECE

Our romance-themed entertainment site is on a mission to help you find the best period dramas, romance movies, TV shows, and books. Other topics include Jane Austen, Classic Hollywood, TV Couples, Fairy Tales, Romantic Living, Romanticism, and more. We’re damsels not in distress fighting for the all-new optimistic Romantic Revolution. Join us and subscribe. For more information, see our About, Old-Fashioned Romance 101, Modern Romanticism 101, and Romantic Living 101.
By Amber Topping on January 6th, 2018