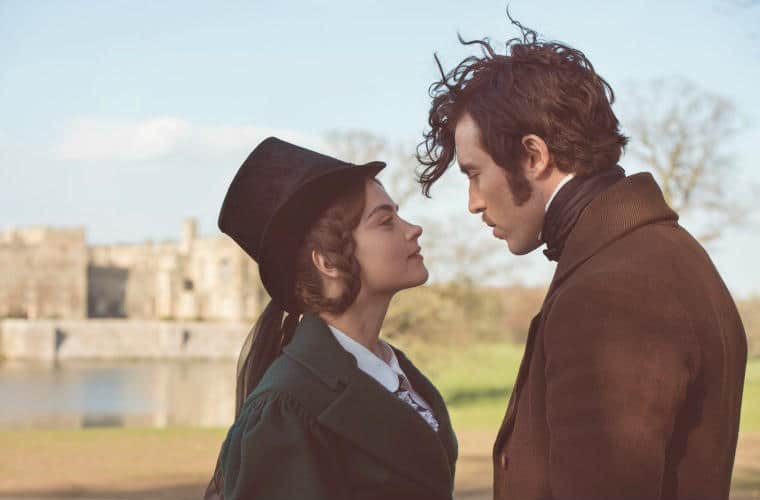 As is the case with this entire series, “Engine of Change” marks another beautiful installment of ITV’s latest gem.

The episode is largely about acceptance and the freeing experience of learning that trust does not mean “weakness.”

An Heir for the Throne

Remember the distress Victoria expressed about children last week? That fear is realized when she learns she’s in the family way. Happiness results for everyone, that is except for the expectant mother. Fearful of the birth that lies ahead, instead of joy, Victoria reacts to this news with tears. All of this she unpacks on Albert’s shoulder (her emotions go every which way; she worries about getting fat and the birth) as he tries to comfort her.

Unfortunately, this inspires a quarrel between the lovers as they try to find a new normal with each other…

Their latest challenge involves the discussion of who will become regent in the event their queen were to die in childbirth. Naturally, Victoria doesn’t hesitate in the nomination of Albert. This angers Wellington and members of the Tory party. But Victoria isn’t about to let this particular plan go unanswered. She even cites abdication should Albert not be approved as regent.

Under the protests of her mother and Albert, Victoria decides to take a trip. The trip is to see the railway and attend a house party hosted by the Giffords.

However, also a part of the festivities is Sir Robert Peel, the one man Victoria has yet to warm to. Albert, on the other hand, has a completely different view of the man. The men seem to get along well enough. This inspires Sir Robert to invite the royal couple to his home to view the locomotive running through his land. Victoria declines, and still miffed with Albert, she shuts him out and confides in Lehzen instead. In private, she chastises Albert, asking him to let her steer the conversation. In response, he leaves the following day with nary a word to anyone to see the locomotive.

Upon Albert’s return, husband and wife have a bitter row. She employs her power as queen as the final decision regarding whether or not a railway is the best choice for the people of England. In the aftermath, Victoria follows her husband’s example and takes a ride on the locomotive. No surprise, the freedom she experiences ends up swaying her.

After more political posturing between the Giffords and Peel, Victoria and Albert make ready to return home. It’s on the journey home that the wife and husband iron out their differences. They make up and reach a new understanding. Victoria confides in Albert her fears of childbirth and the worry motherhood’s impending arrival has placed on her. This carries them through the regency approval. Sir. Robert Peel, a Tory, chooses to support the Queen’s nomination. Albert is appointed regency in the event of his wife’s death. But no one seems worried as the queen claims she’s “Far too busy to die.” 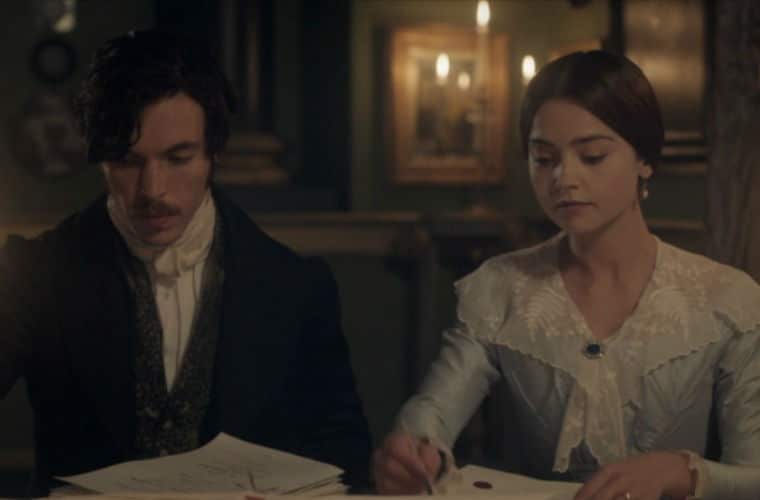 The events of their trip change everything for the Queen. She no longer has any reservations about Albert’s place as more than her confidante and lover. And as the couple settles into their normal evening routine, with no fanfare, she hands Albert a stack of documents. They’re about cotton, an issue she knows little of she tells him. The documents need to be read through, but all are about things about industry, an issue that’s rather more in Albert’s interest than hers.

With one stack of documents, Victoria says so much. She’s not just telling her husband his worth to her, and that his advice matters, she’s telling her government where Albert’s place is: by her side.

Last week, a smitten Chef Francatelli had a breakthrough with the object of his affection. This week he woos Nancy (Skerrett) with a delicacy called “hot chocolate.” Though his pursuit of Nancy has softened her some, she has yet to (completely) melt over these attempts. He ups his game with his extravagant sweet confectioneries. 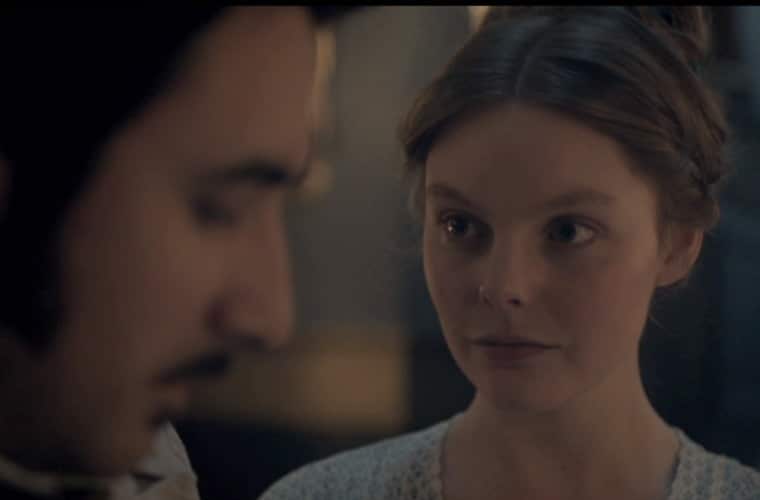 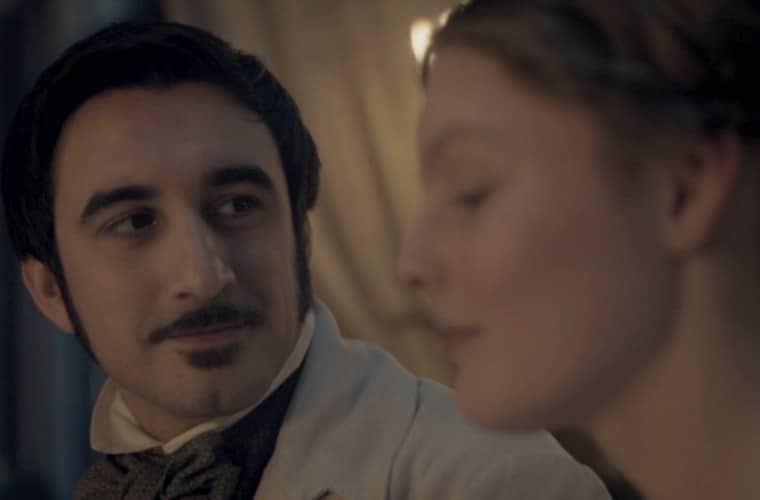 Once he discovers her kryptonite is a sweet tooth, he uses the Queen’s absence to his advantage. With painstaking preparations, he prepares an elaborate meal lit with candles and invites Nancy to dinner. The night goes well. Though no important words pass between them, they tease each other and share laughs. 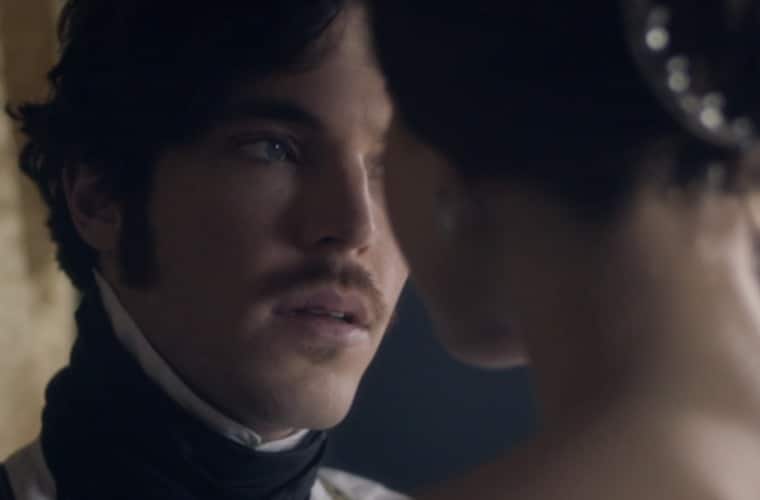 The “swoon of the week” moment comes when, while comforting his wife, Albert reassures her of his undying affection. In response to her telling him he’s sure to be revolted by her body as it changes from the pregnancy, with no hesitation or avoidance, he looks into Victoria’s eyes, and tells her, “A love like ours can burn down a city.”

Yeah. Like I said, swoon alert! Each week the relationship between these two wins me over a little more. Much as I loved Victoria’s relationship with Melbourne, Tom Hughes’ Albert is proving to be an unforgettable hero. But enough of my swooning. Tell me, what did you think of this episode?

Our romance-themed entertainment site is on a mission to help you find the best period dramas, romance movies, TV shows, and books. Other topics include Jane Austen, Classic Hollywood, TV Couples, Fairy Tales, Romantic Living, Romanticism, and more. We’re damsels not in distress fighting for the all-new optimistic Romantic Revolution. Join us and subscribe. For more information, see our About, Old-Fashioned Romance 101, Modern Romanticism 101, and Romantic Living 101.
Pin this article to read later! And make sure to follow us on Pinterest.
By Rissi JC on February 20th, 2017