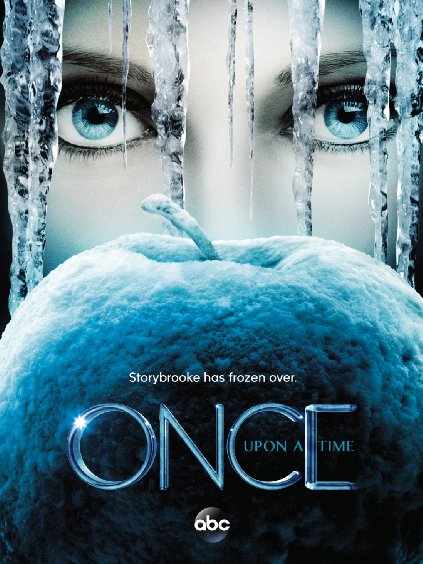 ONCE UPON A TIME…

This week’s episode of Once Upon a Time titled “Rocky Road” once again splits its time between Storybrooke and Arendelle. To makes things a bit less confusing I decided to write my recap of the two storylines separately, rather than bring you all on a merry chase trying to keep stories straight while I go back and forth.

The scene begins with a concerned Elsa and Kristoff talking about Anna’s journey to Misthaven (what we know as the Enchanted Forest). Elsa’s ready to drop everything to run after her, but Kristoff wisely points out that Anna left because she knew the kingdom couldn’t afford to lose Elsa, its new Queen. Elsa’s kingdom needs her more than the capable Anna right now. This fact is only emphasized when a servant interrupts their conversation to inform Elsa that Prince Hans is on his way towards Arendelle with his brothers and a large army.

We next see Kristoff and Sven trekking through the woods at night until he spies the light of a campfire. Hiding among the thick trees, Kristoff watches Prince Hans and his brothers bicker over who will take over as King of Arendelle after they usurp the throne. Hans reveals that he has a trick up his sleeve, pulling out a scroll with the depiction of an urn on it. Kristoff hurries back to Arendelle, warning Elsa that Hans knows where a magical urn is hidden in the mountains that can be used to trap Elsa inside of it. And so the two run off on a mission to find the urn and destroy it.

Elsa and Kristoff find the urn. However, Elsa discovers writing on its side and wants to now study it rather than destroy it, as it might have information about her powers since it was made to capture magical people. None of this matters though when Hans and his men enter a minute later. A fight ensues but Hans captures Kristoff, holding him at sword point, and threatens to kill him unless Elsa lets them trap her in the urn. To everyone’s surprise that urn was not actually empty. The Snow Queen emerges from it and, not flattered by Hans’ comparison of Elsa to a monster, saves Elsa and Kristoff from Hans. 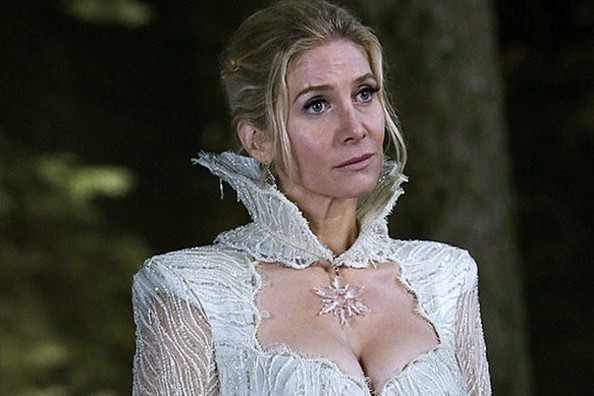 We jump to watching Elsa and the Snow Queen talking and laughing as they walk along the palace halls towards a room containing a portrait of Elsa’s mother. The Snow Queen reveals that the woman in the painting is also her sister, making her Elsa’s aunt. She suggests going after Anna together and finding other magical beings, who may have met the same fate as the Snow Queen. 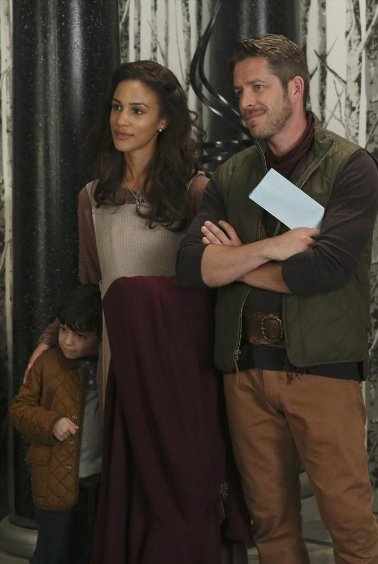 Robin is trying to help Marian acclimate to modern life by taking her around the town to experience life there with their son. Passing in front of an ice cream shop, the group can’t help but go in when faced with their son’s pleadings. The three each get ice cream, but we see the Snow Queen put some kind of spell on Marian’s. Switch to Mr. Gold’s shop, where Emma, Hook, Elsa, and David are trying to no avail to find out why Elsa was in Gold’s urn. 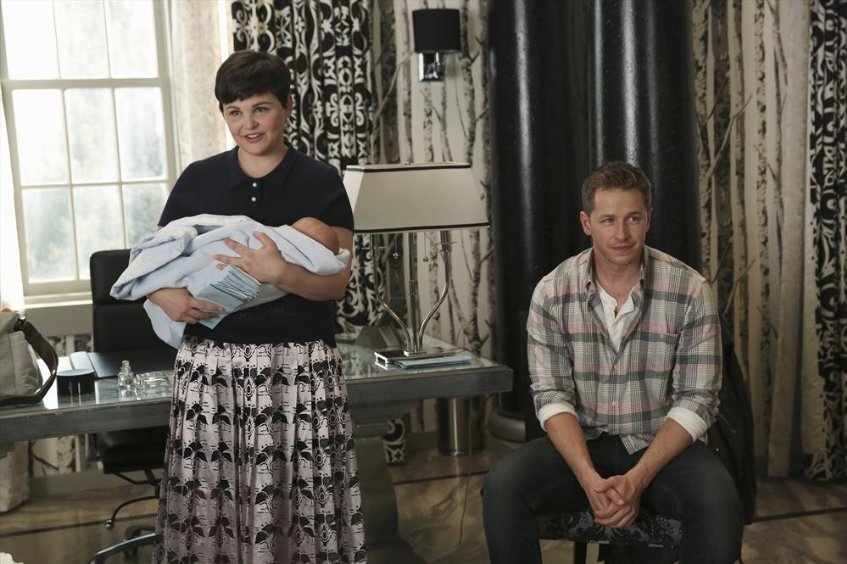 Following this interrogation, we see Mary Margaret introducing the town to her first “Mayor Fireside Chat,” a cutesy term for meeting. The town is very much up in arms about the ice wall and the arrival of Elsa. Their complaints are interrupted by Maid Marian fainting.

Before we get back to finding out what is wrong with Marian, the scene changes to Henry and Regina bonding at Granny’s diner. Henry discovers Regina’s plan to find the author of the book of fairy tales and convince him or her to give her a happy ending, and he completely approves. In a nod back to the good old days of Emma and Henry’s Operation Cobra, Henry decides that he and Regina will create their own little operation to get Regina her happy ending. I actually found it very sweet to finally see Henry show the kind of affection and camaraderie with Regina that he does with Emma. 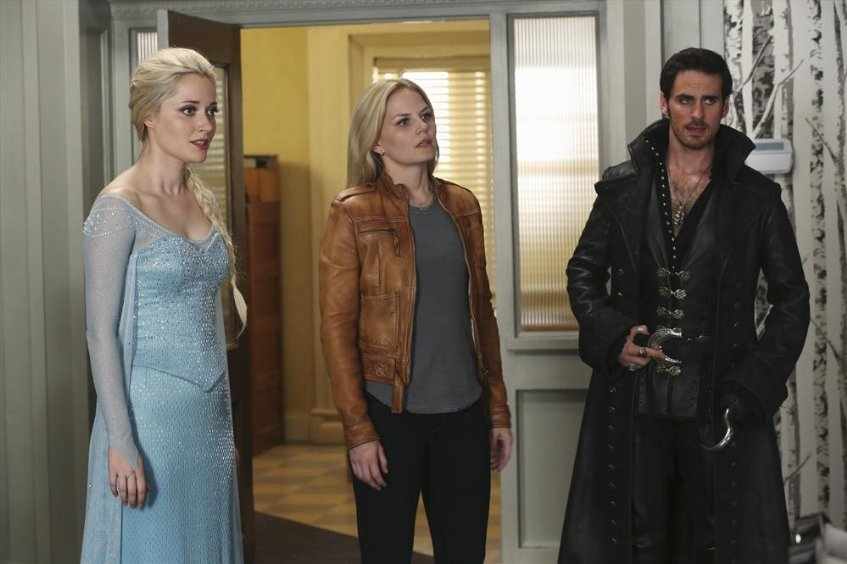 Getting back to Marian…Regina’s diagnosis is that Marian is under a freezing spell, and that the only way to break it is with an act of true love (I know that fans of Frozen are familiar with this spell). Unfortunately, Robin’s kiss fails to break the curse, which we later find out in a touching scene between Regina and Robin is because he loves Regina. And so, thwarted for the moment, everyone goes off in their own separate directions.

Hook and Elsa head off to Gold’s shop, as a witch hunt for Elsa breaks out among the townspeople. There, Hook blackmails Gold (as he knows Gold didn’t give Belle the real dagger) into finding out who cursed Marian from a hair they found on her. The hair turns into snowflakes that will lead them straight to the villain. So off Hook and Elsa go chasing after said snowflakes. 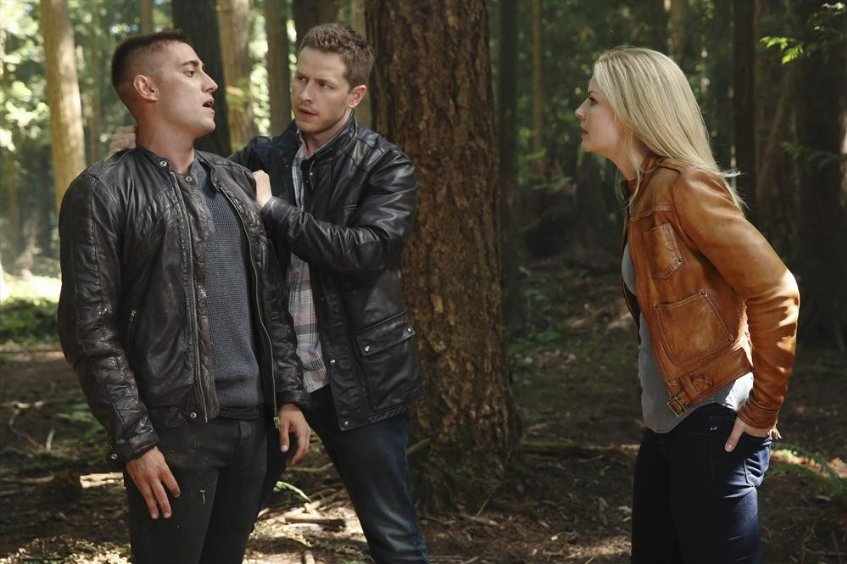 Meanwhile, Emma and David are investigating Robin’s camp sight when they stumble across a man calling himself Will Scarlett, who claims to have seen something odd in the ice cream shop, and that it might lead to Marian’s attacker. Leading them to the shop, he reveals that during the power outage he looked in the ice cream shop and everything was still frozen. It turns out Will was telling the truth as the entire ice cream shop is run by magic and not actual machines or electricity. When the two leave only to find that Will has run off, Emma’s ever-present doubt about herself and her abilities as the savior make an entrance. 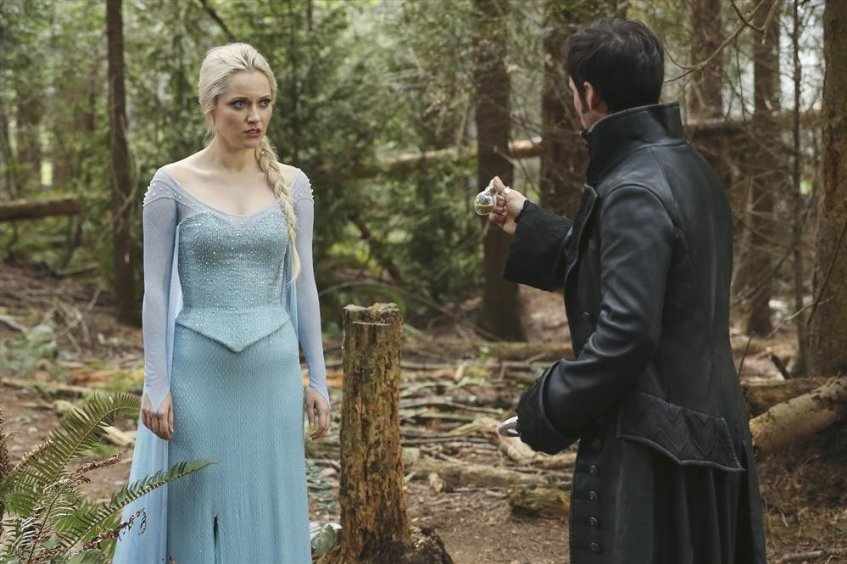 Oddly enough, in the woods Elsa and Hook are discussing Emma and her insecurities. I find myself quite touched at Hook’s constant attempts to understand Emma and try to help her fight her inner demons. He seems like a love interest that is very genuine in his love and will possibly be good for Emma. Getting back to the story, Hook and Elsa discover the Snow Queen in the woods decked out in her full ice queen garb. Unfortunately, she notices them too and reveals that the reason Elsa doesn’t remember her is because the rock trolls in her world made her forget about ever knowing the Snow Queen. Playing on Elsa’s insecurities about her powers, the Snow Queen tells her, “eventually everyone turn on people like us, even friends, even family.” When Emma and David arrive on the scene, a quick magical scuffle ensues between Emma and the Snow Queen, but ends quickly with Emma saving Hook and the Snow Queen disappearing in the chaos. Emma is troubled by her encounter with the Snow Queen, however. She seemed strangely familiar.

Back with Marian, Regina has found a temporary solution to the problem of the spell. She removes Marian’s heart, which is luckily still untouched by the ice. This will keep Marian alive, even though her body may be frozen until they can find a cure.

Cut to Emma and Hook talking in the street. As usual, Emma is pulling away from her feelings for Hook and their budding relationship. Hook won’t let Emma off that easily, though. He pushes until Emma finally admits that she does it because everyone she loves seems to end up dead, and, more importantly, she can’t bear to lose him too. We leave the lovebirds encased in a warm, tender embrace. That’s another point for Hook. He is slowly chipping away at Emma’s walls and moving past her many barriers.

Once Upon a Time leaves us with a scene between the Snow Queen and Rumple in the woods. Emma indeed has met the Snow Queen before. As the Snow Queen tells Rumple that she’s not ready to make a deal with him…yet, we are left to wonder when this meeting took place and why those memories are blocked.

This week ABC introduced a plot that OUAT excels at: family troubles. Our new baddie played by Elizabeth Mitchell turns out to have more than a passing acquaintance with Elsa. 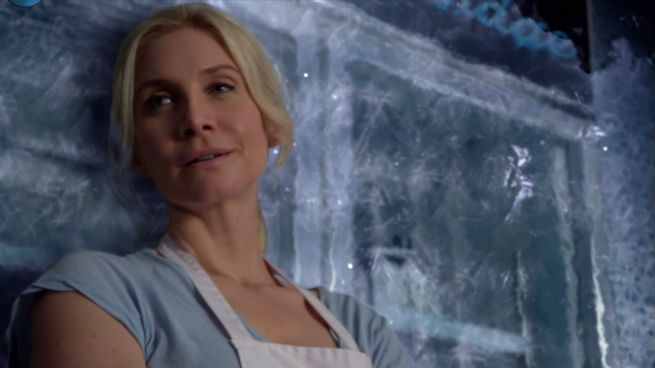 The villain of the Snow Queen is also officially introduced into the story. I like the more quiet nature of Elizabeth Mitchell’s take on the Snow Queen. She doesn’t need a lot of bells and whistles to command attention. She has a powerful presence all on her own. It’s a nice change of pace to have a villain with an almost peaceful demeanor.

Also, where are they going with the whole original author of the fairy tale book plot? Who is it? Have we met them yet? Last time I checked it was Pinocchio who was running around with a typewriter, acting like he was the author of the book. So how are they going to explain that?

Did you enjoy this week’s episode? What are your theories about where the story is heading? Make sure to let me know in the comments!

Stay tuned for next week when I recap “The Apprentice.”

Our romance-themed entertainment site is on a mission to help you find the best period dramas, romance movies, TV shows, and books. Other topics include Jane Austen, Classic Hollywood, TV Couples, Fairy Tales, Romantic Living, Romanticism, and more. We’re damsels not in distress fighting for the all-new optimistic Romantic Revolution. Join us and subscribe. For more information, see our About, Old-Fashioned Romance 101, Modern Romanticism 101, and Romantic Living 101.
Pin this article to read later! And make sure to follow us on Pinterest.
By Rebecca Lane on October 13th, 2014