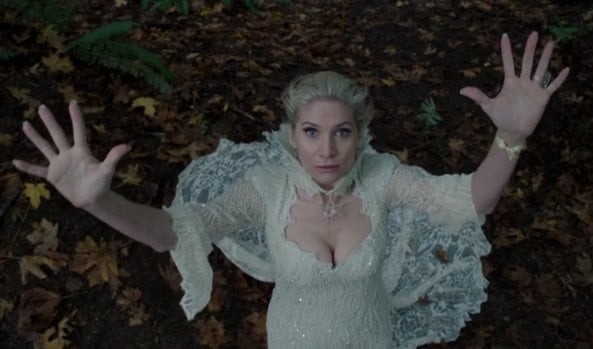 Welcome back to another week of Once Upon a Time. The last time we saw our dear Storybrooke heroes and villains Ingrid had just cast the Spell of Shattered Sight. This week’s episode watches while Storybrooke prepares for yet another curse to fall, a twist reveals where Anna’s been hiding all this time, and Black Beard returns. We also get to see another All Powerful Object save the day…until it doesn’t. So sit tight and hold on to your hats because we’re embarking on another journey into the land of Once Upon a Time.

We first drop in on what appears to be our last visit to Arendelle. Anna and Kristoff have just thawed from Ingrid’s spell and are prepared to run off and save Elsa from Ingrid. To them it seems like Ingrid has only just absconded with Elsa in the urn, but we’ll find out soon enough that that isn’t true. A piece of straw Anna finds also reveals Rumpel’s involvement. The two unfortunately are not left with much time to consider things as Hans and his men have also broken free and want to take over the kingdom. A brief scuffle ensues, and our heroes escape to get working on their next move.

Enter the All Powerful Magic Object: The Wishing Star. It would seem that all along Anna has known that her parents left Arendelle to find this object. I know, I know. “We’re just hearing of this now?” you say. Such is the land of Once Upon a Time. Anna’s mother’s diary also revealed that the Wishing Star is in Black Beard’s possession. So, the two love birds head off to find Black Beard and get it from him. How you ask? Well, they’re going about it like any good pirate, with money. As Anna says, “We’re richest in riches.” I’ll warn you now. There are lots of these cutesy lines in this episode that are nice in theory…but sometimes fail in the execution.

Never fear, our daring duo do indeed find Black Beard and proposition him for the star. Unfortunately, they’ve been beaten to the punch by Hans, who figured out their plan and made sure to buy off Black Beard before their arrival. 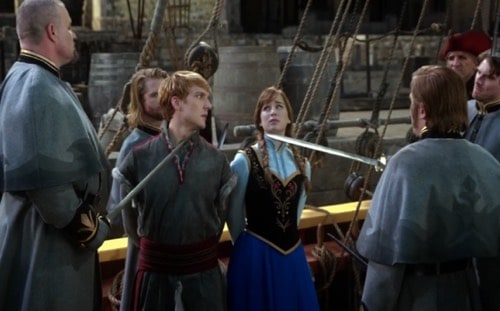 Anna and Kristoff are taken and bound with rope, and then stuffed into a trunk. Black Beard plans to bury them at sea and he doesn’t want any “finterference.” Ha ha. Just before Anna and Kristoff are hurled out to sea we are treated to a number of revelations. First, Black Beard met Anna’s parents and sold them the Wishing Star. Second, the king and queen couldn’t use the star because it only obeys the pure of heart. Third, Black Beard is somehow captaining Hook’s ship (oh wait, remember – he traded it for a magic bean in season three). Four, this isn’t actually a flashback. Anna, Kristoff, and everyone else have actually been frozen for thirty years. And finally, everything that just happened occurred in a timeline roughly parallel to modern day Storybrooke. Unfortunately for Anna and Kristoff, they only have a few moments to ponder this as they are then stuffed in a trunk and thrown into the ocean. Now before I can reveal what their fate is we have to back track a little and peek in on Storybrooke.

Back in Storybrooke the gang is preparing to confront the spell of Shattered Sight, which will make them all turn on each other and tear each other apart till everyone is dead. Everyone is doing their part, though. Rumpel is haggling Ingrid, saying he won’t kill her as long as she lets him, Belle, and Henry escape. Charming is trying to scale the ice wall…without much success.

Regina and Robin are canoodling, as usual. We see Regina bring down some of her walls when she tells Robin, “I’m trying to memorize you like this…with love in you eyes.” Sighs break out in the audience. Belle is doing what she does best, doing research. Her findings reveal that while they can’t stop the curse, they can inoculate themselves against it. A strand of hair from someone who has been struck by the curse before can be used to make a potion that will act as a magical vaccine. Who fits this bill? Anna! Luckily Elsa has recently found Anna’s snowflake necklace, so they can cast a locator spell to find her.

While the two blondes track Anna below the library to a solid stone wall, Rumpel is finding a way to use the town’s magic to his advantage. The fairies are currently gathered at Granny’s where they are also working on a way to break the curse. Since Rumpel has already secured safety for himself, Belle, and Henry –he couldn’t give a fig about the rest of the town–he plans to send Hook in with the sorcerer’s hat to steal the fairies’ magic, which will give him enough power to break free from the dagger once and for all.

The race against the curse is now on in full force. Emma doesn’t want to use magic to blast through the wall to get to Anna, so they enlist the dwarves help to dig through. However, this is going to take hours. Meanwhile, the fairies have discovered a way to make a curse vaccine using Anna’s necklace. The catch? Well, it will also destroy the necklace, rendering it useless in finding Anna. Everyone agrees that the price is worth the greater good, but Elsa isn’t ready to give up on finding her sister yet. She steals the snowflake and heads back to the stone wall with Emma hot on her heels. This time she decides to forget consequences and tear the wall down with magic. What appears on the other side? Not Anna, but a beach. When the necklace stops glowing the two wonder if it’s because there’s no longer an Anna to find. Just as Elsa is about to turn back she says, “I just wish…I wish you were here with me now.” 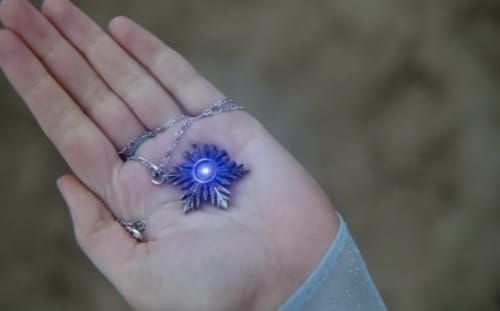 And surprise surprise, the necklace begins to glow brighter than ever. It seems that Anna’s snowflake necklace is actually the Wishing Star. Now how exactly it got from Black Beard to Gerda to Arendelle we’re not sure since Gerda died before she could make it home. So how exactly did it get into Anna’s hands? Once Upon a Time is rather fuzzy on those details.

As you might have suspected, there is much rejoicing, crying, and laughing even after they find out that the fairies have been destroyed by a mysterious assailant (they missed Hook hiding in the background holding a suspicious looking hat). Anna’s appearance no longer means the end of the curse so the others decide to lock themselves up and hope that the immune (Emma, Anna, and Elsa) can take down Ingrid on their own.

The Charmings give Emma their blessing as well as her little brother for safekeeping. Hook appears and gives Emma a final farewell kiss. Regina goes to lock herself in her vault, telling Robin Hood it’s “to keep me in.” Finally lightning strikes the sky and shards of broken mirror come down like rain. We are left looking at a cold-eyed Snow just before the credits begin to roll.

Can Emma and the Storybrooke gang just wish the curse away now that they have the Wishing Star, or can you only use it once?

Why did those in Arendelle unfreeze when they did? Was it Ingrid’s doing? Does she have future plans for Anna?

While I am usually not the biggest fan of Regina and Robin, their scenes did begin to tug on my heartstrings a bit last night. Especially when Regina said she was trying to memorize the way Robin looked with love in his eyes. Today I have to give the prize to Regina and Robin.

Our romance-themed entertainment site is on a mission to help you find the best period dramas, romance movies, TV shows, and books. Other topics include Jane Austen, Classic Hollywood, TV Couples, Fairy Tales, Romantic Living, Romanticism, and more. We’re damsels not in distress fighting for the all-new optimistic Romantic Revolution. Join us and subscribe. For more information, see our About, Old-Fashioned Romance 101, Modern Romanticism 101, and Romantic Living 101.
Pin this article to read later! And make sure to follow us on Pinterest.
By Rebecca Lane on December 2nd, 2014