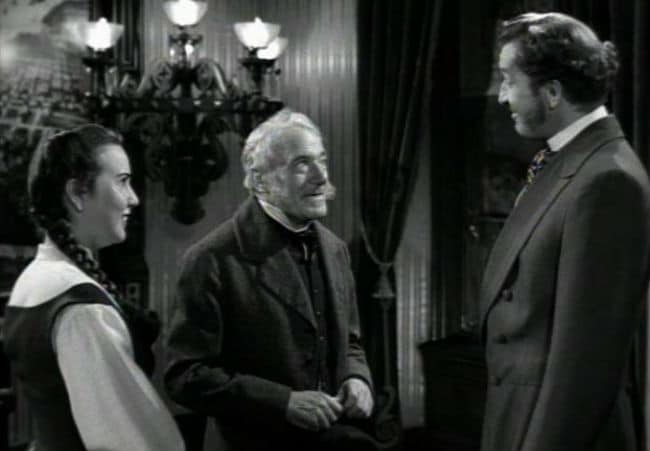 Up in Central Park Review

Today, I don’t watch a lot of films from what is commonly thought of as the “Classic” Hollywood era (the 30s or 40s). But as a kid, I grew up in a house familiar with old Hollywood. We watched everything from Shirley Temple to some of Jimmy Stewart’s most iconic roles. Among those titles were a “series” of films that starred Hollywood darling Deanna Durbin. Each is a charming example of the kind of film Universal Pictures contracted her to be the face of. Though I have favorites among them, none of them are by any means an unpleasant way to enjoy a night in.

RELATED | Vintage Film Review: Something in the Wind (1947) – A Breezy Comedy

In Up in Central Park, Deanna’s next-to-last film (a 23 credit career), she plays the plucky Rosie Dunn, a young Irish immigrant (sans an Irish brogue) moving to America with her uneducated father. Excited about immigrating to the land of the free, upon their arrival, Rosie and her father are swept into the web of William “Boss” Tweed (Vincent Price). Boss is a political giant gaming the system running an incompetent mayoral candidate while he actually makes all of the decisions. Using immigrants’ votes, Mr. Dunn is one of the few who blindly follows the instructions of Tweed’s men nominating him to be their “yes man” candidate for the superintendent of Central Park.

Things for the Dunn’s run smoothly in their first weeks as Americans. Rosie relishes the elevated position her father has been given along with all of the things America can offer her. Until she meets John Matthew (Dick Haymes), a young and ambitious newspaper reporter who’s out to undermine the one man Rosie believes is helping them: Tweed. 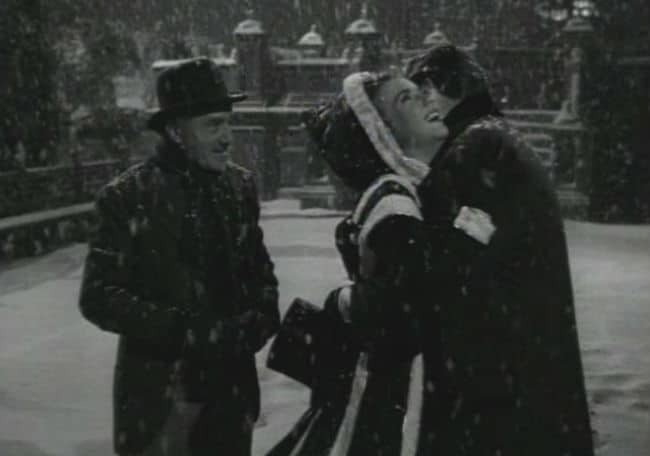 With its effervescent leading lady and interesting plot, Up in Central Park is as cozy-mystery-intriguing as it is delightful. The cast shines brightly, though as a vehicle meant to showcase Durbin, it’s her screen presence that is most charming. With every role she plays, she continued to prove why her films were success after success. It’s particularly fun to see Deanna in a “costume drama” (1870s New York) since, for her filmmaking era, she largely starred in contemporary pieces. The costumes in this one are really pretty if not over bedecked as was popular in this age of filmmaking. From the hats to the pretty parasols, strolling through Central Park is indeed a wonder.

Loosely inspired by a true story (of a crooked politician boss named Tweed), this film went through many revisions. If you were to read any small portion of movie trivia about this one, there are many interesting tidbits to learn. For example, there were a handful of songs cut from this plus this was originally supposed to be shot in Technicolor but was nixed after other setbacks. Had they filmed in color, this would have been delayed even longer. It’s a shame this wasn’t filmed in color because it’d have added greater vibrancy and personality. Still, the script serves as an ample substitute to any failings. The story keeps things light and fun for its group of endearing characters. We can’t even hate the “bad guy” when all is said and done because, in his own way, he does have some sense of regret. 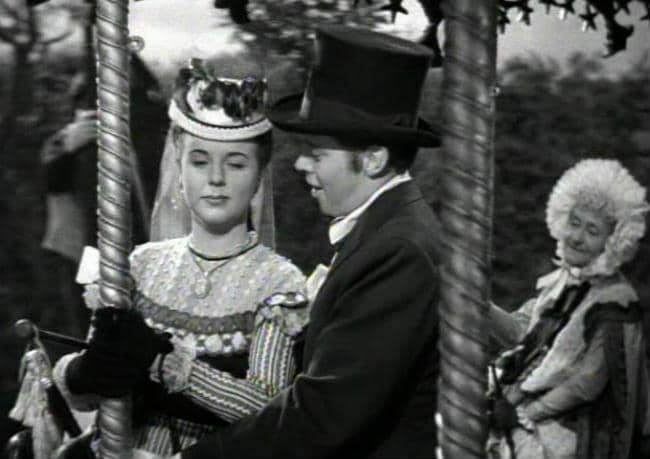 If you’re a fan of the bygone era of Hollywood or black-and-white musical films, this is worth seeing. The pretty staging (including the romantic image of a couple “falling in love” while riding the carousel, all complete with him in a proper top hat) also adds great appeal and atmospheric quality. Though I failed to mention it earlier, I also liked Rosie’s relationship with her father; the cute way she constantly badgers him to wear his proper dress and his effort to learn to read makes their on-screen scenes memorable. When all is said and done, Up in Central Park is like a lovely Sunday afternoon walk one might enjoy visiting in a version of New York’s yesteryears charming and iconic Central Park.

What do you think about Up in Central Park? Do you have a favorite Deanna Durbin film? Sound off below…

Check out more of our Vintage Reviews and Film Reviews.

Our romance-themed entertainment site is on a mission to help you find the best period dramas, romance movies, TV shows, and books. Other topics include Jane Austen, Classic Hollywood, TV Couples, Fairy Tales, Romantic Living, Romanticism, and more. We’re damsels not in distress fighting for the all-new optimistic Romantic Revolution. Join us and subscribe. For more information, see our About, Old-Fashioned Romance 101, Modern Romanticism 101, and Romantic Living 101.
Pin this article to read later! And make sure to follow us on Pinterest.
By Rissi JC on April 29th, 2016