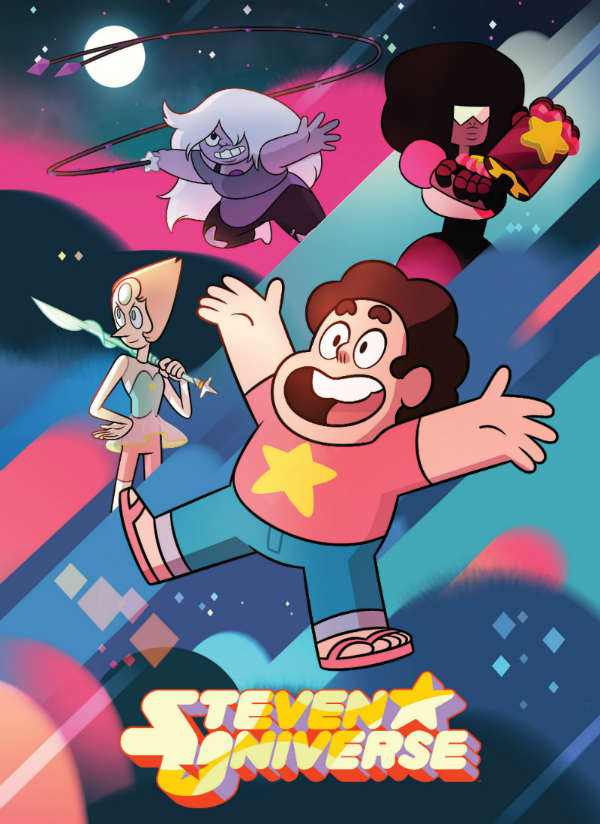 Steven Universe is an animated television show on Cartoon Network and a show that I very much enjoy. Steven Universe is about a young boy named Steven and his adventures with the Crystal Gems, a race of alien warriors who protect the Earth. Steven is the first and only human/gem hybrid with his father being human and his mother being the former leader of the Crystal Gems. Through the course of the show Steven learns of who his mother was before she gave up her physical body to give birth to him, learns of his Crystal Gem heritage and how to control the powers he inherited from his mother.

I find myself appreciating the show more every time I watch it. The show has a laid-back atmosphere with beautiful music, artwork, animation and character designs. The show also encompasses many genres that I enjoy such as science fiction, adventure, and fantasy. One of the show’s strongest aspects by far is the characters. Each character, whether they are regular or reoccurring, is given depth and a purpose in the story. This show has several different characters and many reoccurring characters but for this article I am going to be typing the characters we see the most of which are the Crystal Gems and Steven.

Steven is a very optimistic and compassionate person. He has a great understanding of others and their feelings. Many ESFJs are sensitive to the needs of others and enjoy helping people and Steven is no exception. He wants to please others and make them feel better when they are feeling down; he always knows what to say and what not to say to do just that. He places other people and their feelings above his own and will sacrifice his opinions if doing so makes others happy. This is perfectly demonstrated in the episodes “The Test” and “Open Book” between Steven and the Crystal Gems in the former and Steven and his friend Connie in the latter. He inspires and unites people and encourages them to express their emotions just as he does.

Also like other ESFJs, Steven believes family is most important. He values team harmony and family togetherness and works to keep these values alive as shown in the episodes “Together Breakfast” and “Giant Woman.” He also feels it is his responsibility to protect those he cares for. When it comes to problem-solving, he relates things to what he has read, seen, experienced as well as advice he has given in the past. Steven also loves new things and becomes excited by them, whether it is gem fusion or the concepts of school and summer break. He thinks outside the box and follows his gut instinct most of the time though he cannot always foresee what all the outcomes of his decisions will result in. He really dislikes it when he is not understood or taken seriously when he wants to be. Steven can sometimes over think things and he often trusts internal logic over external logic.

Garnet is the leader of the Crystal Gems and very much lives in the present. She is very action oriented and will jump into dangerous situations without much thought. Her hands on personality are symbolically represented through her weapon, a set of gauntlets. Garnet has Future Vision which allows her to see potential outcomes to all situations. This ability prevents her from acting impulsively and as she is almost always using it, she knows what to do about a situation before it happens. Like many ISTPs, Garnet has an astute sense of her environment and as a result she  can act quickly and respond to emergencies. This is demonstrated in multiple episodes such as “Monster Buddies,” “Cheeseburger Backpack,” and “Jailbreak.” Garnet is independent and reserved, usually reacting to situations with emotional detachment and free of bias. She is a quiet thinker, often calmly taking in the details and facts of her surroundings which allows her to maintain objectivity in every situation. She is nonjudgmental and tolerant. She is not the most talkative character, especially in the first season, but when she does speak it is usually important.

Garnet is a private character and does not open up to others very often. She usually only ever opens up if she is with someone she knows extremely well as seen in the episode “Keeping it Together.” Garnet has an appreciation for risk and possesses a competitive spirit. This is perfectly demonstrated in the episodes “Beach Party” and “Arcade Mania.” Garnet does not have a masterful grasp on social intelligence as she can be insensitive and ignore accepted social norms. She will say or do something without caring how others will feel. This is perfectly illustrated in the episodes “Fusion Cuisine” and “Love Letters.” However, since the episodes “The Return” and “Jailbreak” Garnet has become much more lively and outspoken. She even starts expressing and understanding emotions more often than she ever did before.

Pearl is very logical, factual, organized, methodical and prefers thorough, detailed planning. When she is confronted with disorder, she has a need to create order and organize messes as illustrated in how she keeps Steven’s house clean and organized. Pearl is very good with organizing projects and others. She also has a talent of helping others reach expectations and keeping them in line. In her mind, productivity is accomplished through well-organized systems. She prides herself on these skills and wants recognition for them. She values established tradition and is very conventional. When the group solves problems in an unconventional way as opposed to her plans she asserts that her plan would have worked just as well. Some downsides to her way of thinking, however, result in her being very critical of others and quite blunt.

Pearl has difficulty understanding emotions and she does not have a good handle of them, both of others and herself. For the most part, Pearl handles crisis situations well but at times her emotions make her irrational and hysterical as seen in the episode “Too Many Birthdays.” Pearl respects hierarchy and those in authority. She trusts authority figures and expects obedience from those belonging to a lower rank. Like many ESTJs, Pearl places her trust in the past, what has worked and been done before as well as her personal experience. A perfect example of this is shown in the episode “Rose’s Scabbard” when Pearl recalls her subjective memories of the gem war and forgets all the destruction and loss of life because she remembers the war with nostalgia. She is extremely passionate about these memories and is always excited to share her experiences with Steven, as well as to teach him all that she knows about Gem history and culture.

Amethyst is fun oriented, spontaneous, energetic, lazy, reckless, loud mouthed, loves adventure and has a zest for life. She prefers to live in the moment and adores experiencing new things and takes great pleasure in the things around her, especially food. For example, while Pearl and Garnet often do not eat or sleep because they do not have the necessity, Amethyst is seen regularly indulging in food, non-edible items and even sleeping because she enjoys the sensations such activities give her. She loves being the center of attention and is always ready to have a good time. This is shown in many episodes such as “Tiger Millionaire” and “Beach Party.” Though she is friendly and open, she can be difficult to get close to. Like most ESFPs, she is all heart and does not often think things through. She more often then not makes decisions that feel good and right to her as opposed to ones that are logical and rational. This, of course, leads to impulsive actions which have just as many positive outcomes as negative outcomes. She would rather be spontaneous then plan meticulously.

Amethyst is always happy to assist those around her in practical and thoughtful ways. This is seen in the episodes “Sworn to the Sword” and “Keystone Motel” when she comforts Steven and Pearl respectively. Similar to many ESFPs, Amethyst is often reluctant to be serious or to talk about anything negative. This leads to her bottling up her emotions and burying them deep inside until they erupt in often times negative ways. In the episode “On the Run” Amethyst is shown to care very much about her identity and how others perceive her while also staying true to herself.

Do you agree with my assessment? Or do you disagree? How would you type the characters of Steven Universe? Let me know in the comments below!

Silver Petticoat writers type fictional characters using the Myers Briggs Assessment. We base our choices on research and all around educated guessing. It’s all in good fun and we love a good discussion, so if you agree or disagree with our choices let us know!

Our romance-themed entertainment site is on a mission to help you find the best period dramas, romance movies, TV shows, and books. Other topics include Jane Austen, Classic Hollywood, TV Couples, Fairy Tales, Romantic Living, Romanticism, and more. We’re damsels not in distress fighting for the all-new optimistic Romantic Revolution. Join us and subscribe. For more information, see our About, Old-Fashioned Romance 101, Modern Romanticism 101, and Romantic Living 101.
Pin this article to read later! And make sure to follow us on Pinterest.
By Moriah Burbank on July 17th, 2015