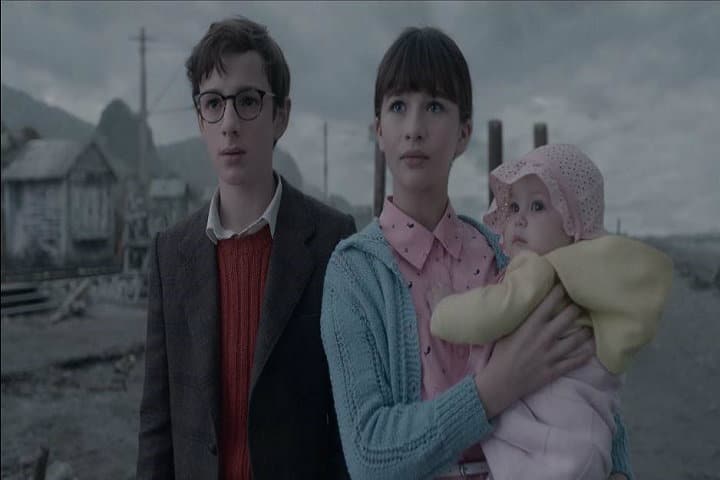 Warning: Do not read any further! Ahead lies only misery, unpleasantness and terrible guardians. Much nicer reviews are available on the main page where you can read about loving couples, fun adventures and happy endings. None of these things can be found here. Remember: You were warned.

A Series Of Unfortunate Events was a popular children’s book series published between 1999 and 2006. It has thirteen installments of woeful adventures that befall the three Baudelaire orphans. The series is well-known for its deliberately dismal tone, clever wordplay and frequent pleas for the reader to seek out something more cheerful. In 2003 the first three novels were adapted into a film starring Jim Carrey. This year, Netflix released their own TV adaptation, which has its own take on Lemony Snicket’s unique world.

Violet, Klaus, and Sunny Baudelaire live a happy, content life with two loving parents. That is, until the fire. One day, the siblings are enjoying a day at the beach when they learn that the family mansion has mysteriously burned down with their parents inside. The orphans are sent to live with the mysterious Count Olaf who seems to be far more interested in their fortune than his role as their guardian.

The director, Barry Sonnenfeld, has spoken in interviews of his love for the books and seems to be a good choice to lead the project. The author, Daniel Handler, is named as executive producer. While it is quite a close adaptation, there are still several surprises in store for book readers. I personally enjoyed the changes as they made a familiar story fresh.

The child actors are very good and tackle difficult material with gusto, especially the tragicomic aspects. And while Neil Patrick Harris is entertaining and sufficiently chilling, I have to admit to preferring Jim Carrey as Count Olaf in the 2006 film. I believe Carrey’s over-the-top performance is more believable for such a dastardly villain. There is also a procession of familiar faces that bring to life the colorful characters from the books. Most notably Patrick Warburton as the usually elusive Lemony Snicket. Indeed, A Series of Unfortunate Events makes the interesting choice of having Lemony Snicket narrate the action and talk directly to the audience. In the books, Snicket is a mysterious figure of which we know very little. However, the tone of the series matches the books well, reminding me a lot of Pushing Daises. That is if it were less cheerful. Also like Pushing Daises, the show uses visuals which contrast the overly colorful with the dark and foreboding.

A Series of Unfortunate Events is a creative, unusual watch. It has certainly left me curious about how they’ll adapt later books. If you like entertainment that sharply contrasts darker themes with whimsy, such as Pushing Daises or anything by Tim Burton, then you will love this show.

Where To Watch: Netflix

Our romance-themed entertainment site is on a mission to help you find the best period dramas, romance movies, TV shows, and books. Other topics include Jane Austen, Classic Hollywood, TV Couples, Fairy Tales, Romantic Living, Romanticism, and more. We’re damsels not in distress fighting for the all-new optimistic Romantic Revolution. Join us and subscribe. For more information, see our About, Old-Fashioned Romance 101, Modern Romanticism 101, and Romantic Living 101.
Pin this article to read later! And make sure to follow us on Pinterest.
By Elinor Cackett on March 17th, 2017