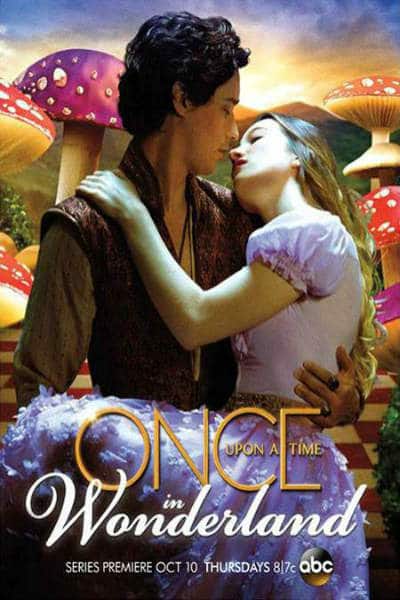 The Show: Once Upon a Time in Wonderland

“In Victorian England, young and beautiful Alice (Sophie Lowe) tells an impossible tale of a strange new land that exists on the other side of a rabbit hole. An invisible cat, a hookah-smoking caterpillar and playing cards that can talk are just some of the fantastic things she’s seen during her adventure. Surely this troubled girl must be insane. Her doctors intend to cure her with a treatment that will make her forget—everything. Alice seems ready to put it all behind her, especially the painful memory of the genie she fell in love with and lost forever, the handsome and mysterious Cyrus (Peter Gadiot). But in her heart, Alice knows this world is real, and just in the nick of time the sardonic Knave of Hearts (Michael Socha) and the irrepressible White Rabbit (John Lithgow) arrive to save her from her fate. Together the trio will take a tumble down the rabbit hole to a Wonderland where nothing is impossible.

Once Upon a Time in Wonderland stars Sophie Lowe (Beautiful Kate) as Alice, Michael Socha (This Is England) as The Knave of Hearts, Peter Gadiot (The Forbidden Girl) as Cyrus, Emma Rigby (Prisoners Wives) as The Red Queen, with Naveen Andrews (Lost) as Jafar and John Lithgow (3rd Rock from the Sun) as the voice of The White Rabbit.”

Please tell me I’m Alice, and it was all simply a dream. Where do I even begin? Last night’s episode of Once Upon a Time in Wonderland was possibly the worst pilot I’ve seen…maybe ever. It started off with Alice returning home from her adventure as a child after her family and friends have all come to the conclusion that she is dead. Of course, after hearing the tales she tells of Wonderland they all think she’s gone mad. So, in order to prove her sanity she spends the rest of her childhood and formative years trying to get back to Wonderland so she can bring proof home of its existence.

In the process, she meets a handsome genie, with whom she falls in love, and goes off to have adventures with…Ok, is anyone questioning this plot just a little yet? Didn’t she want to get home to prove to her family that she was not insane? Instead, she goes gallivanting off for another long period of time. Oh yes, this is sure to give her family peace of mind about their daughter…when she returns months or years later. Also, during this period of time, she develops the skills of a master ninja because that makes total sense.

Anyways, all good things must come to an end. While on an adventure with her now freed genie boyfriend, the Red Queen catches up to them, and he is sadly a casualty of the meeting…or so we are lead to believe. In a flash forward, we see Alice in a padded cell preparing to have her memory of her times in Wonderland removed by what looked like a lobotomy procedure. Then the knave of hearts bursts in just before she’s to go to surgery and tells her that her true love is alive. Here’s where the new ninja skills kick in to help them escape the mental asylum…in Victorian England.

I don’t know about you, but inconsistencies with time and time periods really drive me nuts. One moment we are in the present day in Storybrook once again, where the white rabbit has gone to fetch the knave of hearts to go help Alice. The next we’ve jumped to Victorian England. Now, when exactly is this story taking place? How did we jump a century back in time simply by traveling to England? But that’s not all folks!

First of all, let me just state that the story of Aladdin has no business being linked with that of Alice in Wonderland, but that was something for which I had already prepared myself. The level of ludicrousness they would take it to, however, I had not.

The one thing I had been looking forward to as being possibly entertaining was Naveen Andrews from LOST being among the cast. Now, I wasn’t all that keen on seeing him play Jafar, but I was willing to put my misgivings aside and hope for the best. Unfortunately, I simply could not overlook his comically gross overacting. I was simply waiting for the maniacal villain laugh to top it all off. Now to be fair I believe it was the writing at fault, not Mr. Andrews. As we’ve all seen from LOST, the man can act, which says quite a bit about how poor the writing of this episode was.

Next, we had Barbie playing the Red Queen. I had a hard time believing she could rule any country with her collagen-filled lips and supermodel pout overshadowing any kind of acting that may have occurred. But wait…nope, I don’t think any real acting did happen, so not to worry, you didn’t miss anything. Jafar’s interactions with the red queen are so poorly written and acted out as to actually be comical. What did it for me in the end was when Jafar rode off on his magic carpet looking like some California surfer.

So, to sum everything up, we have Barbie as the Queen of Hearts, a California surfer Jafar, and a ninja Alice. To be quite honest, with the cast they had, this show really should have been much much better. Although, the one good thing about it is that it is so bad that it’s actually funny. I would suggest watching it simply for the laugh factor. I don’t want to give too much away, so I’ll leave it at that and let you be the judge.

Did you agree with my assessment? Did you notice any other discrepancies that you’d like to share? Sound off below…

Be sure to take a look at all of our TV reviews.

Our romance-themed entertainment site is on a mission to help you find the best period dramas, romance movies, TV shows, and books. Other topics include Jane Austen, Classic Hollywood, TV Couples, Fairy Tales, Romantic Living, Romanticism, and more. We’re damsels not in distress fighting for the all-new optimistic Romantic Revolution. Join us and subscribe. For more information, see our About, Old-Fashioned Romance 101, Modern Romanticism 101, and Romantic Living 101.
Pin this article to read later! And make sure to follow us on Pinterest.
By Rebecca Lane on October 11th, 2013