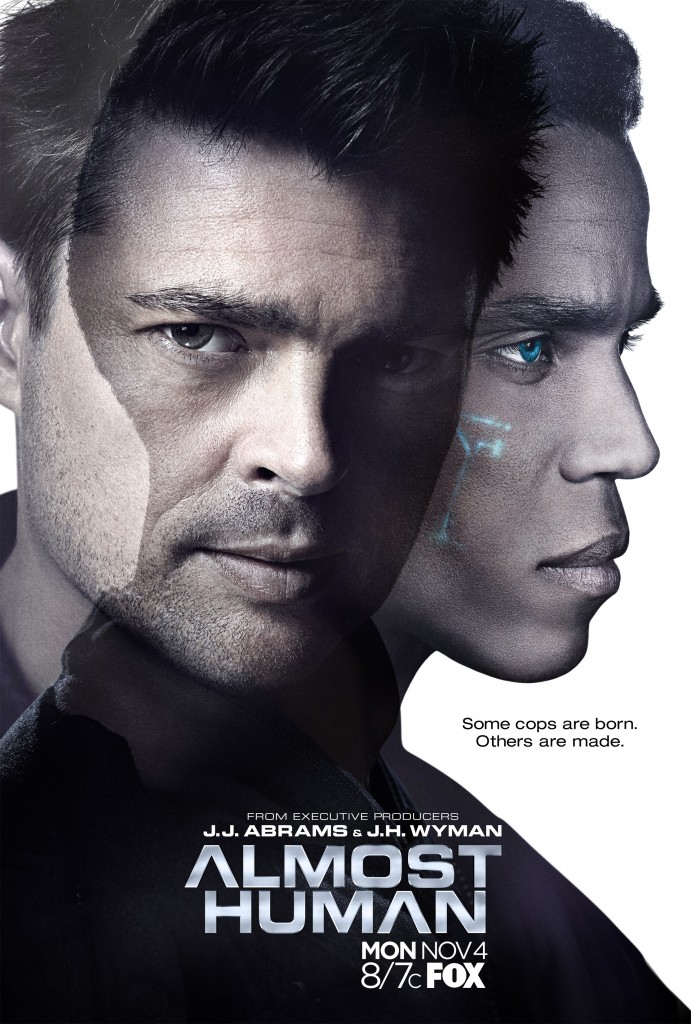 When: Mondays at 8/7 central

J.J. Abrams TV shows have been coming out in droves as if from some sort of secret factory. Almost Human is another one to add to the list, Abrams on board as an executive producer. But this series isn’t about J.J. Abrams (the man IS super busy after all); it is all about the creator and writer J.H. Wyman. For some of you, the name might sound slightly familiar and that is because he was the actual showrunner of Fringe, that other Sci-Fi series by J.J. Abrams. While Sleepy Hollow stems from Fringe creators Roberto Orci and Alex Kurtzman, the series is actually run by newbie Phillip Iscove. And while entertaining at times, the show just didn’t bring the same magic as Fringe. Almost Human does because there is focus in the writing (not several voices with too many writers penning the pilot script for instance). J.H. Wyman knows what he is doing here and it shows, Almost Human by far one of the best TV pilots of the Fall Season.

The series takes place in a dystopian future (2048), a world of high crime thanks to the sudden explosion of technology and correspondingly also one of immense corruption. To try to help contain the high criminal population, human detectives are partnered with lifelike androids, most of them without emotion. But when John Kennex (Karl Urban from Star Trek and Lord of the Rings) returns to the police force after an absence of two years (grudge intact against the emotionless robots), he pushes his annoying partner out of the car (with great dry comedic timing I might add).  Since he is still forced to work with an android after this “unfortunate” accident, John gets stuck with one named Dorian that seemingly has real human emotion. He can think outside the box and even show loyalty. But it might just take a little while for John to warm up to his robot partner because of his past in which an android refused to help save his very human partner.

It is this story that is clearly being set up to be at least a season long arc. Two years prior, John’s team had been ambushed and killed (excepting himself who also barely got out alive with a blown off leg and a 17 month coma). He even lost the memory of this incident, memories that he is desperately trying to piece back together. Who went after his team and why? His backstory connects seamlessly into the first case told in the present that sets up a great premise for the remainder of the season. Likely, the show will go back and forth between cases of the week and serialized stories that connect to the whole much like Fringe and even The X Files did.

The cast is particularly well chosen from Karl Urban as the ‘hero,’ (he is great in this role but that comes as no surprise), Michael Ealy as the android Dorian who plays the part with ease and even humor, Mackenzie Crook as the techie expert (can’t help but constantly think of him as one half of the Greek duo in Pirates of the Caribbean), Minka Kelly as Valerie, an intelligent fellow detective who seems to know a lot about John, to the fabulous Lily Taylor who plays the Captain. There is no weak link; no pilot like acting that gets better over time because everyone already is good. All the characters are promising as well, if not quite developed yet because this is just the first episode that focuses mainly on John. Thankfully, he does get a good dose of characterization to start us off. By the end of the episode, I believe him as a character and even understand why he is so cynical and prickly around the edges. Furthermore, because this show is all Wyman, I have no doubts that the remainder of the characters will get their time to shine as well.

With expensive looking visuals set in the future, special effects that are almost movie in quality, a great cast, believable characters, and an excellent movie worthy plot told in serialized form, Almost Human has the capability to be just as good as Fringe. What works the most though is the buddy cop formula this show has going on between Dorian and John. Never a dull moment on screen together and that bodes well for the future of the show. While this series is comparable to Blade Runner and Fringe, what is great about Almost Human is that it feels fresh despite the familiarity of the stories being told. Hopefully, this series can hold on to its potential and its audience (This is Fox so make sure to tune in live so we don’t get yet another Firefly and Dark Angel repeat). We need another good Science Fiction series on TV because there are so few out there these days.

Read my take on Thor: The Dark World

Our romance-themed entertainment site is on a mission to help you find the best period dramas, romance movies, TV shows, and books. Other topics include Jane Austen, Classic Hollywood, TV Couples, Fairy Tales, Romantic Living, Romanticism, and more. We’re damsels not in distress fighting for the all-new optimistic Romantic Revolution. Join us and subscribe. For more information, see our About, Old-Fashioned Romance 101, Modern Romanticism 101, and Romantic Living 101.
Pin this article to read later! And make sure to follow us on Pinterest.
By Autumn Topping on November 18th, 2013