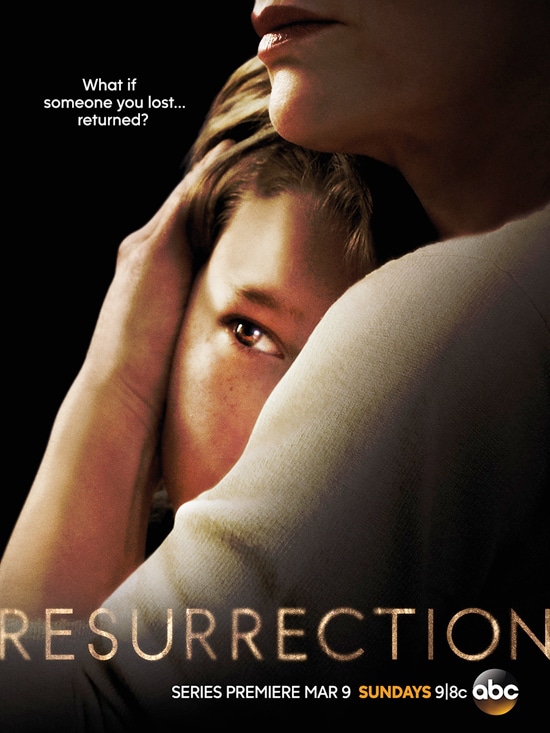 I sort of caught this show by chance. I saw maybe one or two promos on TV and that was it. On a whim I decided to watch Resurrection because the preview I saw looked intriguing enough. Well, I’m glad I did. There aren’t that many new shows this past season that have had a great hook with a strong ensemble cast, but thankfully ABC’s Resurrection does. Reminiscent of ABC’s other hit series Lost (mythology driven character drama), Resurrection has the potential to be a runaway hit with suspenseful drama, a wide array of three dimensional characters and most importantly a mysterious mythology which promises to keep viewers hooked to their screen week after week.

Going back to Lost, the very first shot of Resurrection seemed almost like a throwback to the first shot of Jack in the woods on the island right after the plane crash. Instead, here we have a young boy (Jacob) who wakes up in a puddle in the middle of a field all the way in China. Strange thing is we quickly learn he’s American and doesn’t know exactly how he got there. Soon Immigration agent, J. Martin Bellamy, as played by Omar Epps, takes Jacob to a town called Arcadia where Jacob claims to be from. In a shocking turn of events, we discover Jacob drowned 32 years before. So how has he come back to life? And why is here right now? His mother Lucille quickly accepts the miracle of the return of her son, but Jacob’s father Henry finds it a little harder to accept. Besides Bellamy and the family, the other characters affected include Jacob’s uncle the Sheriff, his cousin Maggie and Jacob’s old best friend Tom Hale who is now grown up and a pastor.

Without going into too much detail, the series is basically about how people from this town who have died are coming back to life and returning for mysterious reasons unknown. No doubt, the mythology will unfold in new and captivating ways from episode to episode.

One of the best aspects of Resurrection itself was the actual characterization. A lot of these high concept series in the realm of Lost or Battlestar Galactica ultimately fail because while they seemingly have a great idea, they completely miss why Lost and Battlestar were fantastic in the first place; and that’s the characters. It was always about the journey of the characters that made these shows special, not the concept (even though that was good too). I’m optimistic the same will be able to be said about Resurrection in the future, though the writers have a way to go yet. For now, each character remains interesting and while we don’t know too much about each one, they individually hold promise to tell a rich story as the series progresses.

I also felt the writing of the episode was particularly strong for a pilot. Many pilots tend to have a lot of clunky dialogue with too much exposition, but this series didn’t seem to have those problems. The dialogue was natural sounding for the most part and the scenes were constructed in a purposeful way; I loved how the idea of “faith” permeated the entire episode with lines like “how much do you want to believe?” Again, like Battlestar and Lost (without actually being at the caliber of these shows), this series promises to take a deeper look at faith, religion, science and beliefs and ask interesting questions without actually being preachy (it’s all about a story and this world’s mythology after all).  While there were a few awkward, cheesy moments it seems the writers are already aware of the story they’re telling and know their voice quite well. So I look forward to the next episode.

In all, I found myself hooked to the pilot from start to finish. It is easily one of the best pilots of this past season and I recommend everyone go and watch it if you haven’t yet. It’s certainly going to be one of those shows where you can’t wait to see what happens next (too bad it’s not on Netflix!) The series has a good hook with an interesting mystery, the characters are believable and the mythology promising with good writing all around. Hopefully the series won’t lose steam too quickly leaving too many unanswered questions for longer than it should. Only time will tell, but for now I’m definitely a fan.

So what did you think of Resurrection? Are you a fan? Or is this show not for you? Let me know in the comments!

Our romance-themed entertainment site is on a mission to help you find the best period dramas, romance movies, TV shows, and books. Other topics include Jane Austen, Classic Hollywood, TV Couples, Fairy Tales, Romantic Living, Romanticism, and more. We’re damsels not in distress fighting for the all-new optimistic Romantic Revolution. Join us and subscribe. For more information, see our About, Old-Fashioned Romance 101, Modern Romanticism 101, and Romantic Living 101.
Pin this article to read later! And make sure to follow us on Pinterest.
By Amber Topping on March 11th, 2014