(I received a free copy of  To Love a Spy from the author, Laura Beers, to write an honest review on The Silver Petticoat Review. I was not financially compensated for this post and all opinions are my own.)

Freed from the clutches of her cruel, traitorous mother and impostor husband, Lady Camden wants to rebuild her fractured life. But the years of terror and pain she endured at their hands continue to grip her heart in an iron vice. Refusing to stray from the refuge of her country estate, Kate tentatively agrees to an unusual alliance with the new Lord Camden, being mindful to keep her trust, and her heart, firmly safeguarded.

Adrien, the Earl of Camden, had lost everything he held dear while working undercover in France as an agent of the Crown, known only as Hawk. Now an earl, he wants only to repair his tattered, lonely life. His efforts are interrupted, however, when he is called to accept another assignment: Stop French spies from passing a bill in Parliament that will eliminate British aid in the war against Napoleon.

When Kate’s past pulls her into a web of treachery and deceit, a life she is wholly unprepared for, Adrien must use any means necessary to stop the French spies from succeeding in their evil designs and keep her safe. When the truth is finally revealed, will Lady Camden be strong enough to seize her own future and happiness, or will her heart be too shattered to ever love a spy?

To Love a Spy Review 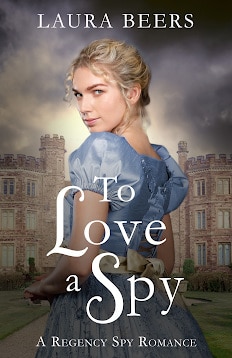 In the third installment of her romantic regency spy series, Laura Beers delivers what is arguably her best story yet. Beers deftly balances romance and mystery while adding depth to her characters. To Love a Spy moves neatly between Adrien’s mission and his and Kate’s budding romance. Furthermore, Kate’s story and identity do not get lost in the mix. As a result, Beers moves her story forward fluidly without sacrificing plot or character development.

However, I must point out, that it is in Kate’s story Beers truly shines. Beers gives due consideration to the trauma of Kate’s past. But, she does not drown Kate in it. Instead, it is very much two steps forward, one step back. Moreover, Kate’s story blends beautifully with Adrien’s. For Kate is not the only one with demons. These personal struggles and triumphs also compliment a well-paced mystery. Indeed, the political intrigue of To Love a Spy is my favorite story line of The Beckett Files series.

Rounding out the story are secondary characters we all know and love. Benedict and Eliza feature prominently. Yet, they do not steal the focus from Adrien and Kate. Rather, they become part of their story. By no means are they simply props. Benedict and Eliza serve a purpose to Kate and Adrien’s development as well as the action.

Final Thoughts on To Love a Spy

In her debut story, Saving Shadow, Beers’ writing, while solid, faltered in places. In To Love a Spy, Beers has found her stride. Adrien and Kate’s love story weaves in flawlessly with a suspenseful mystery.

To Love a Spy focused tightly on well-developed characters and a believable plot. Not to mention swoon-worthy romantic moments between Adrien and Kate! Better yet, we get more than a glimpse of Benedict and Eliza’s life and it remains sweetly romantic! Regency romance fans, take note! Laura Beers and her Beckett Files series are truly a treat!

Have you read The Beckett Files series? Which one is your favorite? Drop me a line in the comments below!

To Love a Spy is available now on Amazon or Barnes and Noble.

Our romance-themed entertainment site is on a mission to help you find the best period dramas, romance movies, TV shows, and books. Other topics include Jane Austen, Classic Hollywood, TV Couples, Fairy Tales, Romantic Living, Romanticism, and more. We’re damsels not in distress fighting for the all-new optimistic Romantic Revolution. Join us and subscribe. For more information, see our About, Old-Fashioned Romance 101, Modern Romanticism 101, and Romantic Living 101.
By Catherine on April 3rd, 2018