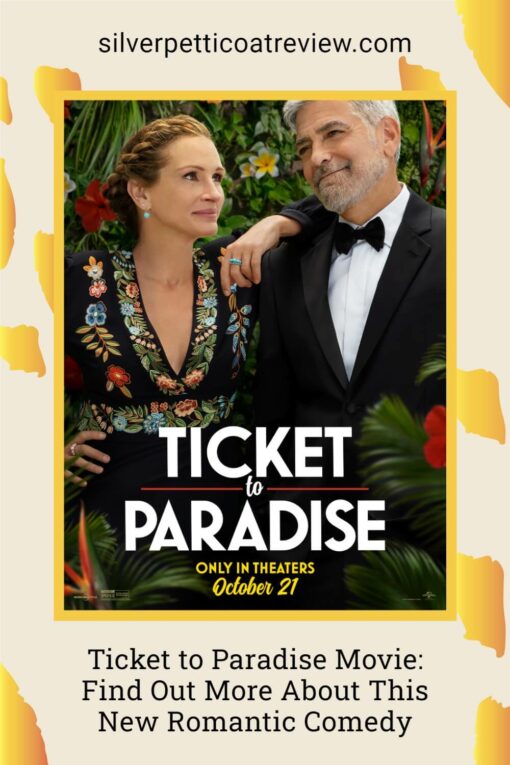 Julia Roberts was once the queen of romantic comedies in the ’90s – from Notting Hill to My Best Friend’s Wedding, Runaway Bride, and Pretty Woman. And now, the queen is back! She returns to the romantic comedy genre with the upcoming Ticket to Paradise movie with George Clooney as her co-lead.

And based on trailers, press releases, articles, and interviews (see the NY Times interview with Julia Roberts and George Clooney), it has us very excited! Ticket to Paradise is very much in the style of late 90s and early 2000s romantic comedies, and that’s a good thing from where we’re standing.

So, here is everything we know about Ticket to Paradise before its release in October.

Academy Award® winners George Clooney and Julia Roberts reunite on the big screen as exes who find themselves on a shared mission to stop their lovestruck daughter from making the same mistake they once made. From Working Title, Smokehouse Pictures and Red Om Films, Ticket to Paradise is a romantic comedy about the sweet surprise of second chances.

Based on the trailer, you’ll know what to expect from this movie – lots of funny moments (I was getting My Best Friend’s Wedding vibes), romantic scenes, and a happy ending.

It’s just the escapist romance we all need in our lives right now! A quality rom-com with more than just fluffy romantic moments – but an actual comedic script with actors who understand physical comedy and line delivery.

Ticket to Paradise has an exciting creative team/crew that worked on the film bringing this new romantic comedy to the big screen.

From the official synopsis:

Directed by Ol Parker (Mamma Mia! Here We Go Again, writer of the Best Exotic Marigold Hotel films) from his script with Daniel Pipski, Ticket to Paradise is produced by Tim Bevan (Darkest Hour, The Danish Girl) and Eric Fellner (The Theory of Everything, Les Misérables) for Working Title, by Sarah Harvey (The Best Exotic Marigold Hotel, co-producer In Bruges), by Deborah Balderstone (Palm Beach, Gone), by George Clooney and Oscar® winner Grant Heslov (Argo, The Midnight Sky ) for Smokehouse Pictures and by Julia Roberts and Lisa Roberts Gillan and Marisa Yeres Gill (both co-executive producers, the Homecoming series) for Red Om Films.

They filmed Ticket to Paradise in Queensland, Australia, on the Whitsunday Islands (Haslewood Island), Brisbane, and the Gold Coast. They also filmed scenes on Moreton Island and The Palm Bay Resort on Long Island.

The crew was “aided by incentives from the Australian federal government and from Screen Queensland’s Production Attraction Strategy.”

So, expect gorgeous scenery on top of the swoony romance.

So, mark your calendars.

TICKET TO PARADISE – WHERE TO WATCH

In return to 90s style, the Ticket to Paradise movie will only be available to see exclusively in theaters.

However, since it’s a Universal Pictures film, Ticket to Paradise should be available to stream on Peacock 45 days after its release.

In her recent New York Times interview, Julia Roberts made some fantastic arguments in favor of rom-coms. She admitted that she loves participating in the romantic comedy genre, but it can be hard to get right.

She adds: “There is a really simple math to it, but how do you make it special? How do you keep people interested when you can kind of predict what is coming?”

To add to Julia Roberts, I think to make a romantic comedy special; you must have a strong script, a talented cast of actors with chemistry who can do comedy, a gifted director, and a satisfying (usually happy) ending.

If you don’t have strong writing, say from someone like Nora Ephron, a rom-com can become generic rather than memorable.

Often, part of the rom-com formula gets overlooked – and that’s the comedy bits, the brilliant dialogue – all in favor of just showing a romantic story.

Thus, to create special rom-coms, producers and directors in the future need to hire actors for more than their looks – they also need to be capable of pulling off comedy AND romance. Consider Meg Ryan, Sandra Bullock, Fran Drescher, and Julia Roberts. They understood this.

RELATED: Romantic Moment of the Week: ‘Sleepless in Seattle’ and How to Be in Love in a Movie

Same with the screenwriters and directors of some of the best romantic comedies of all time, like You’ve Got Mail, While You Were Sleeping, and Notting Hill. They understood how to write brilliant and comedic dialogue.

In the interview, Roberts added that she thinks “we didn’t appreciate the bumper crop of romantic comedies that we had then. You don’t see all the effort and puppet strings because it’s fun and sweet and people are laughing and kissing and being mischievous.”

As for why Julia Roberts took twenty years to return to the rom-com genre, she admitted in another interview that “If I had read something that I thought was that Notting Hill level of writing or My Best Friend’s Wedding level of madcap fun, I would do it. They didn’t exist until this movie that I just did that Ol Parker wrote and directed.”

This statement is promising for the quality we should expect from Ticket to Paradise – not just as a theatrical film but as a romantic comedy.

Overall, romantic comedies should be taken seriously as a genre and not just an afterthought. And hopefully, Ticket to Paradise will help revive the brilliant rom-coms of the past we all took for granted.

Only a month and a half to go! Here’s to hoping it’s a rom-com to remember.

How excited are you about the Ticket to Paradise movie? Do you plan to see it in theaters? Do you miss the style of 90s and 2000s romantic comedies? Discuss below.