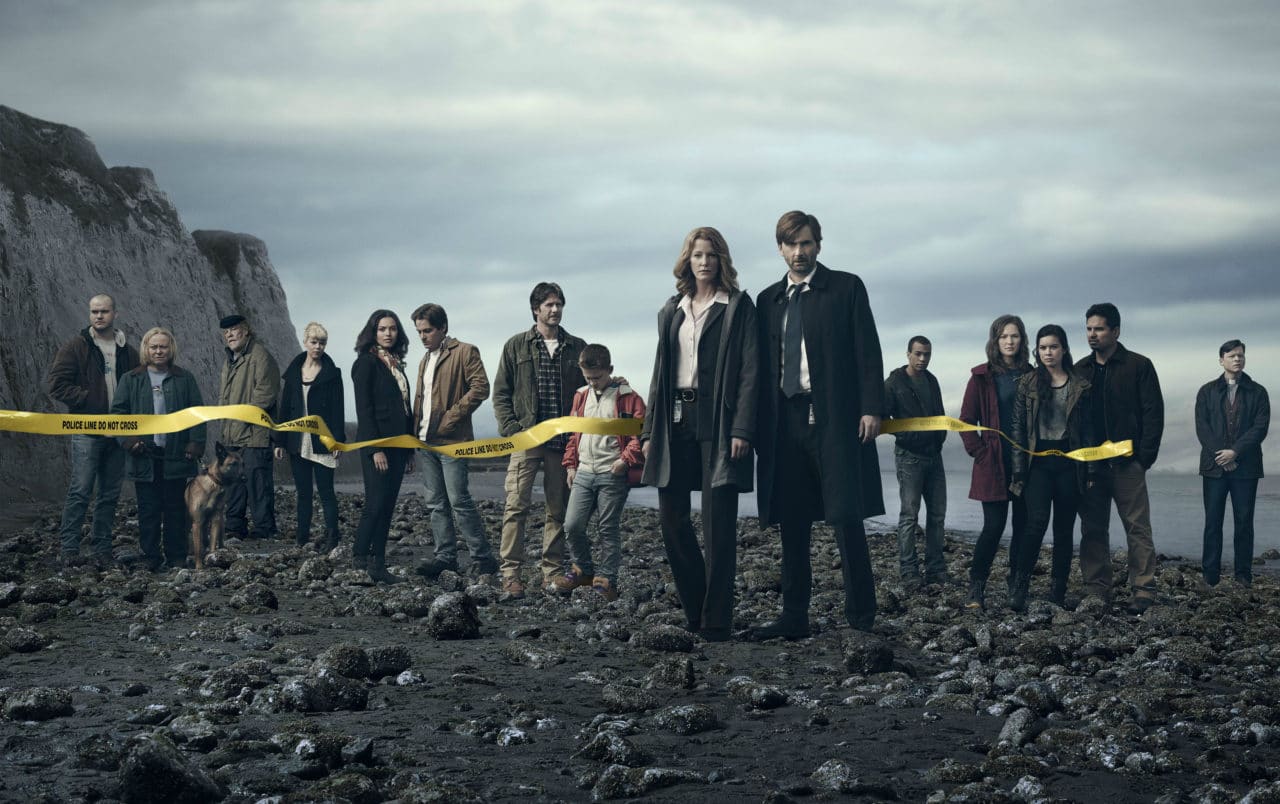 THE SETUP: A remake (with the same writers) of the popular UK Series Broadchurch, Gracepoint tells the story of the murder of a young boy in a small town where everyone is a suspect.

I was a huge fan of Broadchurch, so hearing that FOX was going to air an American version of the same story intrigued me, especially since David Tennant was cast in the identical role. But could the American version hold to the same level of quality that the British series did? In a word, yes. Though it is a little unnerving to watch the exact same story and characters with different actors (excluding one – though he has a different accent).

This isn’t a remake per se, but rather more like two different theater productions of the same play.

This isn’t a remake per se, but rather more like two different theater productions of the same play. One wonders if David Tennant was cast simply because no one else can play the role as well as he can. In all, the first episode was a fabulous production with good writing, fantastic acting and a mystery intriguing enough to keep people around (though one suspects there will be a new killer this time so as to keep the audience guessing).

The first episode is perfectly choreographed and plotted introducing the audience to every possible suspect. I love a good mystery, rather than stereotypical procedural cases which I can figure out in the first five minutes, so this is a breath of fresh air. No doubt the writers have clearly in mind who the killer is. Like a good novel, clues are placed in just to the right spots, so that later you can look back and go… “Oh! That’s what that meant.” There’s no making up as they go along here which for a show like this is a very good thing.

In all, while I don’t think this series is as good as the British production, it’s almost as good which is good enough for me. I will definitely be watching the entire ten-episode run. I rate it 5 corsets.

As a huge fan of the British equivalent Broadchurch, I had major misgivings about the Americanized version with basically the same cast of characters played by different actors. How could this possibly work? Then I heard that David Tennant from the original cast was joining Gracepoint to play the same character with a different name. Now, I was intrigued. Maybe my undying love for everything David Tennant or perhaps even my love for the stellar character writing convinced me to give it a chance. Whatever the case, I’m glad I did. This television experiment is definitely worth checking out for both Broadchurch fans and newbies alike. 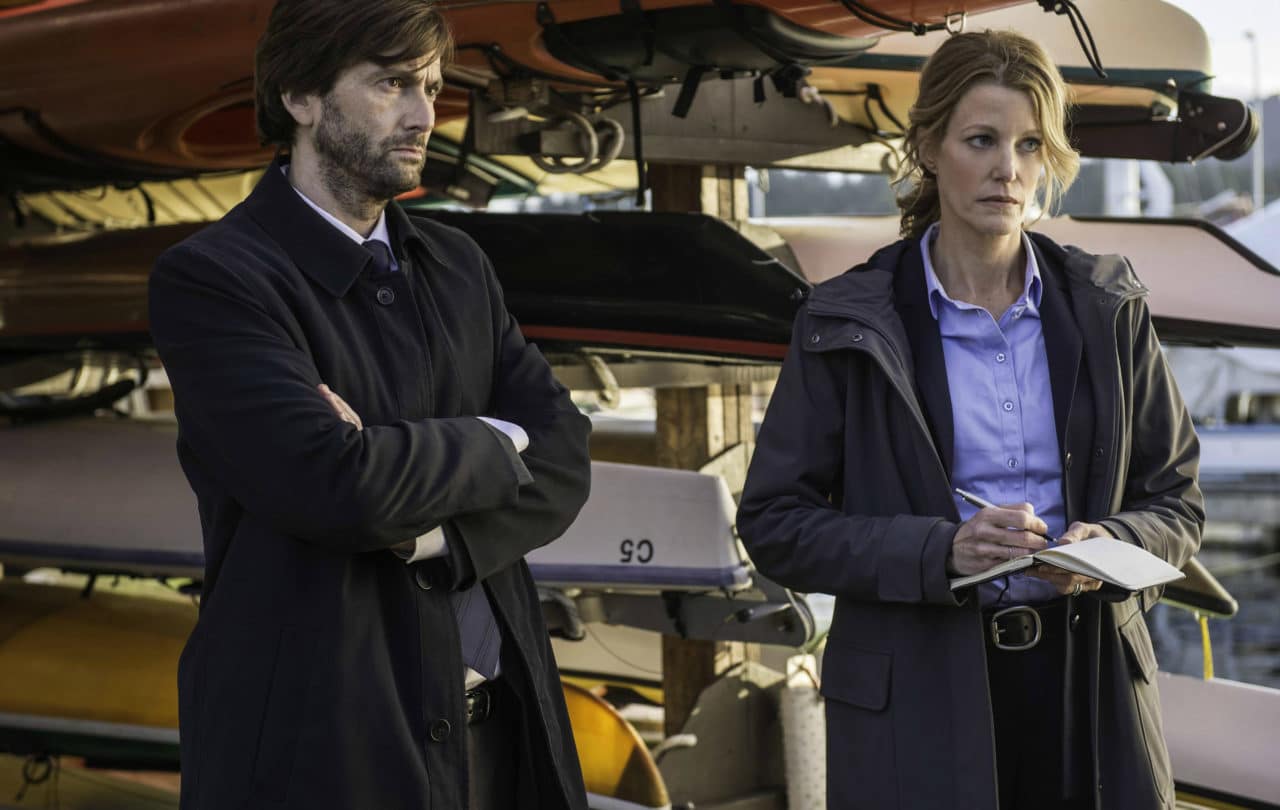 Part of what I love about this experiment is that we get a different ending. Who the killer was the first time around, isn’t necessarily going to be the killer the second time around, similar to that of The Killing (a remake of a Danish show). And for those of us who love an intelligent murder mystery (unlike the cliché procedural cases on television these days), nothing could be better than putting our thinking caps on and figuring out the case. Who did it this time around? Who killed a 12 year old boy in the idyllic town of Gracepoint? Only time will tell.

While overall I like the original cast better (partially because I saw it first), I do think Gracepoint has a fantastic ensemble cast that competes with the best. The acting is good and believable, Tennant bringing an extra gravitas to the series as a whole. With the same writer on board, the writing is equally as good as the original. The characterization, the dialogue, the mystery; everything works. For some reason, Americans aren’t tuning into this brilliant show. I say give it a chance. You may just get sucked into the mystery and realize what you’ve been missing. I rate this 5 corsets overall.

The murder of a twelve-year-old boy devastates a small, tightly knit coastal town in Fox’s new drama Gracepoint. David Tennant stars in this remake of the UK series Broadchurch, in which he played the same role of the lead detective investigating the murder of a young boy. As a huge fan of David Tennant, I have been waiting with bated breath to see this show. Tennant, as usual, didn’t disappoint. He was great in Broadchurch and I have no doubt he will win over American audiences with his impeccable performance in Gracepoint. We get to see a new side of Tennant’s acting abilities in this new crime drama. He’s left behind his zany Doctor Who days and is now impressing viewers with his stern, hard-nosed depiction of Detective Emmett Carver.

He’s left behind his zany Doctor Who days and is now impressing viewers with his stern, hard-nosed depiction of Detective Emmett Carver.

Playing his partner, Detective Ellie Miller, is the talented Anna Gunn, complimenting Tennant’s character with her emotion and sensitivity as the close friend of Daniel’s, the victim’s, mother and a key member of this small town. In this town everyone is a suspect, and one of the key entertainment factors that will draw in viewers will be trying to figure out who the killer is. Fox has smartly set up an interactive web portion to the show, allowing viewers to guess and investigate along with the detectives. I have no doubt that this show is going to be one of the most popular of this season.

What did you think of Gracepoint? Let us know in the comments.

Our romance-themed entertainment site is on a mission to help you find the best period dramas, romance movies, TV shows, and books. Other topics include Jane Austen, Classic Hollywood, TV Couples, Fairy Tales, Romantic Living, Romanticism, and more. We’re damsels not in distress fighting for the all-new optimistic Romantic Revolution. Join us and subscribe. For more information, see our About, Old-Fashioned Romance 101, Modern Romanticism 101, and Romantic Living 101.
Pin this article to read later! And make sure to follow us on Pinterest.
By The Silver Petticoat Review on October 11th, 2014