The Wind Rises is Hayao Miyazaki’s cinematic farewell, his final film in a long and celebrated storytelling career. Written and directed by the master, The Wind Rises is an animated, fictionalized biopic and historical drama examining the possible life (it is greatly fictionalized) of Jiro Horikoshi, an aeronautical engineer and designer of many renowned and rather infamous WWII fighter planes.

If you’re a plane aficionado, you’ve probably heard of him and his planes. Miyazaki combines the story of this historical figure with an adaptation of the 1937 novella The Wind Has Risen by Tatsuo Hori, a bittersweet story of love lost.

So, The Wind Rises is essentially a mash-up. It’s inspired by a real-life man and his part in Japan’s WWII armament, as well as by a fictive tragic love story. Yes, because at its heart, The Wind Rises is about love, about passions and obsessions and dreams – be they of flight or of one special woman. But as with all passions, there are consequences. Because to be a lover of flight in an era of war has long-reaching consequences and many moral and ethical quagmires. And to be a lover of a woman with a terminal illness necessarily means an intimate knowledge with sorrow.

Jiro dreams of flight. As a boy, he wants nothing more than to become a pilot. But his nearsightedness and the coke-bottle glasses put a stopper on that dream. Still, the soaring dreams continue. After reading an article about the great Italian aeronautical engineer Giovanni Battista Caproni, Jiro dreams of Caproni, a visionary mentorship which will follow Jiro the remainder of his life. Caproni tells him that it is far better to design planes than to fly them. 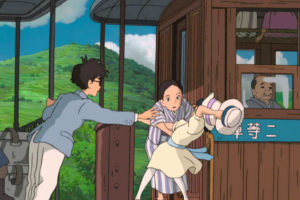 As a young man, Jiro now studies aeronautical engineering at a university in Tokyo. He survives the Great Kanto earthquake of 1923, aiding a stricken young girl and her nanny in the ensuing chaos. It is a fateful and portentous meeting in Jiro’s life. And the years pass. Jiro continues to dream of flight, to draw, to design, to imagine, to create flight. This is his life, this is his love, this is his obsession, his life’s great passion.

After university, Jiro gets a job with Mitsubishi designing fighter planes. Mitsubishi has many military contracts with the Japanese military. It is here, in the realm of the armament of the skies, that the Japanese government finds resources. The economy is depressed, people are starving, but there seems always to be money for weaponry development. And for this dreamer of flight, well, these are the militaristic conditions he must work within if he is to create flight. Jiro has never wanted anything but to create flight. It is his raison d’être.

So, he dreams and designs and creates. Some are spectacular failures. Japan is far behind technologically. So, he travels. He travels to Germany of the Third Reich to look at Junkers’ planes. He travels more, sees more, finds more and more inspiration. Caproni tells him in a dream that a thing of beauty is worthy of creation in and of itself, even if humankind chooses to misuse and abuse that beauty…

After a rather disastrous attempt at building a fighter plane, Jiro finally takes a much-needed break. On this holiday, he meets, or rather, re-meets an entrancing young woman, Naoko. The wind keeps bringing them together. It brought them together on a train journey, years prior, during an earthquake. And it brings them together now. It is love. For the first time in Jiro’s life, his heart finds someone to love. But Naoko has tuberculosis. And this is not a fantastical tale, where magical potions suspend death sentences. Naoko and Jiro have constraints on their love, time constraints. These are the conditions they must love within if they are to be together. 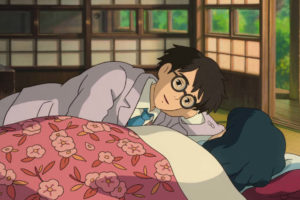 So, they choose time together. Jiro creates with Naoko by his side, in his thoughts, in his heart. He dreams of flight, and he dreams of Naoko. And his next airplane is one that will change the course of aviation history. It is a thing of deadly beauty. It will herald an era of kamikaze pilots. And it instigates a war with the United States, a war that cannot be won. A war that will only bring untold suffering and death.

Jiro dreams of flight, and Jiro loves his fading Naoko.

“The wind rises,” the French poet Paul Valéry writes, “One must try to live.” The Wind Rises is about trying to live, trying to live and to love and to dream and to create under war conditions and with mortality always readily imminent. 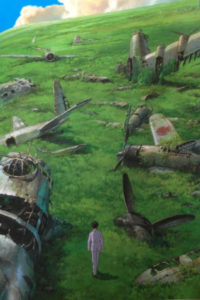 The film raises all sorts of moral, ethical and philosophical questions about creative responsibility, about the consequences of creation – of the repercussions of abstract ideas being made concrete. What are the parameters of genius? What resources are being allocated to what purposes and to what ends? Who’s paying for development? Where is personal responsibility in a patronage relationship? Yes, many, many highly pertinent questions for our current day.

The Wind Rises is thoughtful and thought-provoking. It is not Miyazaki’s best work. There are flaws and minor irritations, including a rather two-dimensional Naoko. This from a man who has created some of the most outstandingly complex heroines in film. Although I am sure there are discussions out there as to why this is. Yet, despite it all, The Wind Rises remains a beautiful and heartrending farewell from an extraordinarily gifted storyteller.

Where to Watch: Available on DVD.

Our romance-themed entertainment site is on a mission to help you find the best period dramas, romance movies, TV shows, and books. Other topics include Jane Austen, Classic Hollywood, TV Couples, Fairy Tales, Romantic Living, Romanticism, and more. We’re damsels not in distress fighting for the all-new optimistic Romantic Revolution. Join us and subscribe. For more information, see our About, Old-Fashioned Romance 101, Modern Romanticism 101, and Romantic Living 101.
Pin this article to read later! And make sure to follow us on Pinterest.
By Jessica Jørgensen on October 27th, 2017