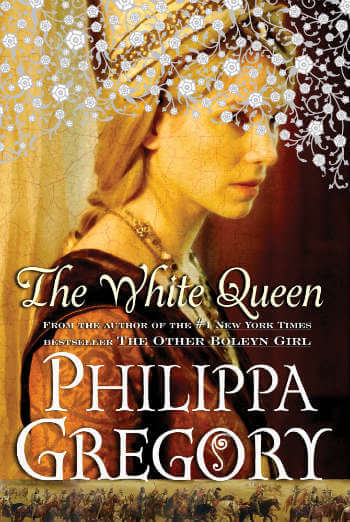 Elizabeth Woodville is a woman of extraordinary beauty and ambition. Her mother is Jacquetta, also known as the mystical lady of the rivers, and she is even more determined to bring power and wealth to the family line. While riding in the woods one day, Elizabeth captures the attentions of the newly crowned King Edward IV and, despite her common upbringing, marries him in secret.
When she is raised up to be his queen, the English court is outraged, but Elizabeth rises to the demands of her exalted position and fights for her family’s dominance. Yet despite her best efforts, and even with the help of her mother’s powers, her two sons become pawns in a famous unsolved mystery that has confounded historians for centuries: the lost princes in the Tower of London.
In this dazzling account of the deadly Wars of the Roses, brother turns on brother to win the ultimate prize: the throne of England.

Everybody loves a good fairy tale. From birth, children are surrounded by films suffused with stories always about a princess and her ever-elusive but handsome prince. At times in life, fairy tales really do come true. At least, such was the case for the woman history knows as Elizabeth Woodville.

The White Queen tells the tale of a beautiful young twenty-seven-year-old widow, known by the name of Lady Elizabeth Grey (née Woodville). For decades, the Lancastrians and the Yorkists have been waging a war across the battlefields of England, resulting in absolute chaos. The Lancastrian faction is headed by King Henry VI who is known by his moniker of “The Mad King,” and his French-born Queen, Margaret of Anjou, who is infamous for her cruelty. The Yorkist faction is led by Edward, the Duke of York and his cousin, Edward, Earl of Warwick, who is also known as “The Kingmaker.” To better understand the book, one needs to bear in mind that the Wars of the Roses was a constant civil war that was fought by two crowned and anointed kings, Henry VI and Edward IV. There were times where Henry VI was in power and there were times when Edward IV was in power.  Needless to say, it was an unstable time, where situations were mercurial from day-to-day.

After her husband dies at the Second Battle of St. Albans, she has all her dowry lands taken from her by her mother-in-law, leaving her sons no inheritance. With nothing to lose, Elizabeth slips out one morning with her two sons, Thomas and Richard, to stand beneath the oak tree that flanks the great road. They wait for some time and, eventually, a large cavalcade of men appears headed by the handsomest golden-haired man that Elizabeth has ever seen. It was if Cupid had struck with his bow and that it was the beginning of their love. The golden-haired man is the young and recently crowned Yorkist King, Edward IV. Elizabeth leads Edward back to her home, Grafton Manor, where her mother, Jacquetta Woodville, Baroness Rivers awaits them. Edward takes a drink with Elizabeth as she explains the entire situation, hoping to sway the king with sympathy, but she finds herself growing in admiration for him. Rather wittily, the wise Jacquetta reflects to their guest, “There is no man could ride past my daughter.”

What unfolds is a delicious love story about a poor young widow whose family are supporters of the Lancastrian king, and the Yorkist king himself. From romantic scenes that transpire in a garden to the quiet church wedding, the story is woven together masterfully like a beautiful tapestry. When Edward proposes marriage to Elizabeth, she accepts and they soon marry thereafter with her mother Jacquetta as a witness. It appears that, due to the nature of war, Edward and Elizabeth have to keep their marriage secret. Elizabeth grows nervous at the thought when her brother Anthony points out that she may have been tricked into a sham marriage. However, when facing the prospect of marrying a French princess – at the behest of the Earl of Warwick, Edward finally announces that he is already married to Lady Elizabeth Grey.

In what can perceived as perhaps one of the loveliest romances of the late Medieval Era, Elizabeth is eventually made queen but little does she know that she is in danger more than ever!

Author Philippa Gregory is a talented writer and she skillfully brings to life the story of one of the most revered English queens of the Middle Ages. Reading the book, I could not help but fall in love with the characters of Edward and Elizabeth as well as their fairy tale romance. He could have married a foreign princess, which was the custom of the day, but he chose to go with his heart. In Elizabeth, he found a perfect match and they seemed to remain close despite all of the conflict and danger that they constantly faced.

I would like to talk a little bit about the marrying of fantasy with history. Ms. Gregory does such an exceptional job of weaving in the story line of the medieval legend of the river goddess Melusina. It is whispered in the story that Jacquetta, Elizabeth’s wise mother is from the house of Burgundy and that she is descended from Melusina as well. The author’s depiction of Jacquetta is possibly what I enjoyed most about the story because she gave her an almost fairy-like air to her and it made her fascinating. One never quite knew what to expect from Elizabeth’s mother who was the complete opposite of her solid English husband.

The White Queen has already been made into a series by Starz which received middling reviews in the UK.  However, I think The White Queen would be more gripping and exciting as a full-length feature film.  Think the classic fairy tale of Cinderella a la Wars of the Roses and you’ve got The White Queen.  If this sort of time period interests you, consider checking out these books: The Wars of the Roses by Alison Weir; The Princes in the Tower by Alison Weir; The Women of the Cousins’ War: The Duchess, the Queen, and the King’s Mother by Philippa Gregory, David Baldwin, and Michael Jones; The Stolen Crown: The Secret Marriage that Forever Changed the Fate of England by Susan Higginbotham.

Content Note: There are some graphic sex scenes in this book, which are often unnecessary.

Our romance-themed entertainment site is on a mission to help you find the best period dramas, romance movies, TV shows, and books. Other topics include Jane Austen, Classic Hollywood, TV Couples, Fairy Tales, Romantic Living, Romanticism, and more. We’re damsels not in distress fighting for the all-new optimistic Romantic Revolution. Join us and subscribe. For more information, see our About, Old-Fashioned Romance 101, Modern Romanticism 101, and Romantic Living 101.
Pin this article to read later! And make sure to follow us on Pinterest.
By Kendall Turchyn on September 13th, 2015