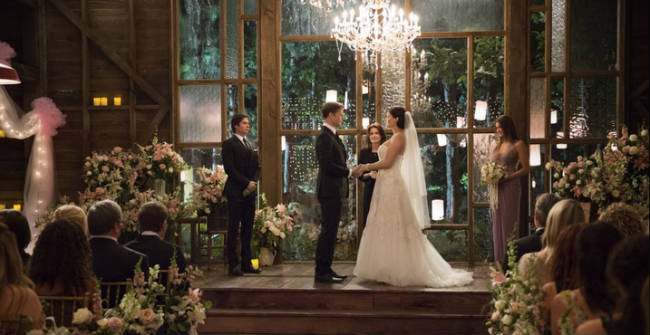 The Vampire Diaries: I’ll Wed You In The Golden Summertime Recap

I have not had this much fun watching The Vampire Diaries in quite some time in this week’s episode “I’ll wed you in the golden summertime.” And this is even before the shocking twist at the end. A wedding was hours away, Caroline was back (yayyy) and in charge of decorations, Damon made a choice and Lilly is out of prison. All in all, a thrilling hour of television.

“If there is anywhere to be superstitious it’s in Mystic Falls,”  Elena’s words turning true before the day is over. My head is still reeling with the promo for next week, but we will get there soon enough. Enjoy the wedding while you can!

Bonnie, Lily and Some Tragic Magic 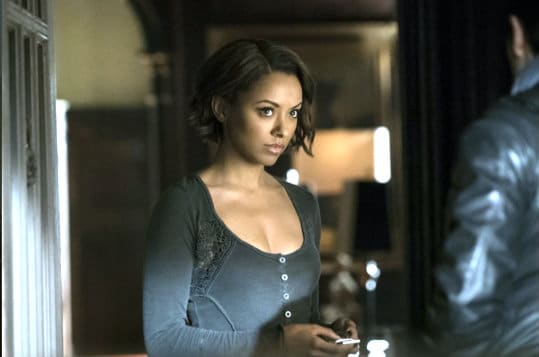 Right from the first shot in the episode, things were promising to turn tragic. Bonnie dreamt of Lily Salvatore in her room with Kai standing outside. She dreamt there was a loophole in the spell that locks Kai and Lilly’s creepy vampire witch family in the prison world, releasing them.

After Bonnie’s dream, for a second I thought Enzo was planning an escape for Lily, but it turns out he was for once simply trying to be nice by sending her an mp3 player with songs from the year she was still around and not locked up in her personal hell. Lily was definitely not in the mood to listen to songs though. She attacks the messenger. Once again poor Bonnie suffers as Lily tries to choke her.

“We were just discussing the fact that there is a desiccating vampire less than 50 feet away from where we are getting ready.”

Later, Bonnie does not buy into Elena’s explanation that this is all because Lily is desiccating. So amongst the distractions of the wedding, Bonnie takes it upon herself to take care of Lily. Matt, with a bag full of vampire killing stakes, is all set to help her.

Their risky plan goes all wrong when Lily manages to mess with their heads or was it someone else?? Vindictive and cold as always, she leaves them lying helpless and escapes. She meets up with Enzo who apparently had no idea of the escape plan. But who helped her? They reach a kind of deserted dockyard and by this time the suspense is literally killing me.

While Elena is clearly loving every minute of being human, Stefan tries his hardest to make Damon realize he would hate every second that he is no longer a vampire.

Meanwhile, in a scary moment, Jo passes out mere hours from the wedding. The nausea and fainting spell was triggered by stress and there is nothing to worry about. This gives new-human Elena and completely-human Alaric time to bond and appreciate how good it is to no longer be an immortal vampire.

“Life has purpose again. It is finite” – Alaric

Back to our vampire brothers, Stefan takes Damon to a house in a normal neighborhood, giving his brother a peak into what life would be like as human. Mortgage, neighbors, kids, taxes, frozen dinners… Stefan has a long list of the most mundane to deter Damon from making a wrong decision.

Damon isn’t as impulsive as everyone assumed though. He has actually given it some thought. He wants to realize Elena’s dream. They would live in an apartment above the bar that Damon would own, close to a medical institute where Elena can study.

Even though Stefan slowly starts to get convinced, he still reasons out with his brother. Elena and Damon would have to break ties with all others because their safety will be at stake. Other vampires could come coveting the cure that would run in their veins.

In almost A Christmas Carol like fashion, Stefan shows Damon a possible future where as the years pass he and Elena slowly drift apart. Damon would spend lonely hours getting drunk while Elena becomes unhappier and unsatisfied with their relationship until one fateful day she dies and Damon is forced to watch himself walk into a silent dark apartment, facing an isolated brooding existence without the girl he loves.

Damon is shaken by the dreadful listless future and lashes out at Stefan, calling him selfish. It seems Damon has a lot to ponder.

Stefan then returns to Elena. They joke about how good the Salvatore brothers look in a tux. I couldn’t argue with that! Stefan even teases Elena about a brother swap. Its nice to see how much in sync Stefan and Elena are and how they continue to rely on each others’ friendship. They will always have a special place in each others’ hearts.

Stefan goes on to tell her how turning into a vampire made Damon discover himself. In the meantime, a clearly upset Damon fixates on the sounds and scenes in the neighborhood. He walks upto a kid playing with a ball and punctures it. By this point, I fear he was ready to spiral into his reckless wild side again.

Caroline In Charge As Always.. Or Maybe Not… 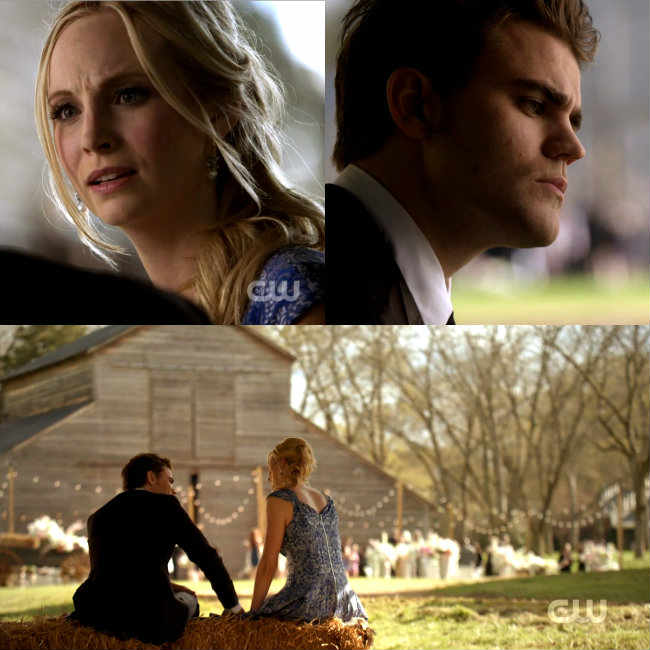 It was highly entertaining to see Caroline back to her sprightly control freak caring self. Within minutes of her arrival, she calmed the bride and apologized to Elena. She even managed to set things right with Tyler (though Matt was MIA on the forgiveness scene front). Caroline delegated work to all the boys and managed to set up an exquisite wedding location.

In the gardens outside, all dressed in a lovely blue frock, she is met by Stefan. I enjoy the slow buildup of a relationship, but the tension between these two has dragged on for far too long.

Still, I loved the beautiful backdrop of the wedding as Caroline and Stefan sat holding hands away from the crowd.

“That’s what falling for somebody is. It’s being vulnerable. It’s giving up control.” – Stefan

Caroline finally opens up to Stefan. In her meticulous approach to problems, she has made a list of all she has done because of Stefan. She has obsessed over him when he left, missed out on the final moments with her mother, even turned off her humanity and done horrible things she can’t take back. Stefan understands she feels out of control around him, just as he does. That is what being in a relationship is.

I was rooting for them to kiss and make up, instead all hopes crashed as Caroline walked away because she was not ready to give up on control of her life. I hope she takes the plunge and agrees to be with Stefan. These are two of the most decent people on The Vampire Diaries and deserve happiness.

Vows and a Wedding 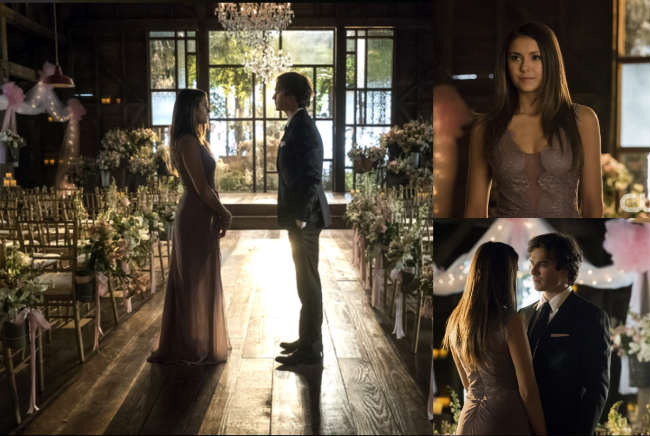 Damon is back and talks to Elena who looked gorgeous in a lacy lavender gown. Outside that house, he watched an old couple and the life and love they shared. It convinced him to reach a decision. He will gladly take the cure to be with Elena. Nothing could make him happier.

“I have been a vampire for a long time. It’s been a blast, but I would give it up in a second to be your husband.” – Damon Salvatore.

It felt like a wedding vow as Damon said the words standing there in front of Elena, at the wedding aisle. What followed was blissful love making in the barn. It was a perfect Damon and Elena moment.

Damon tells Alaric of his decision and the delighted groom is proud of his best friend.

Then comes the wedding… 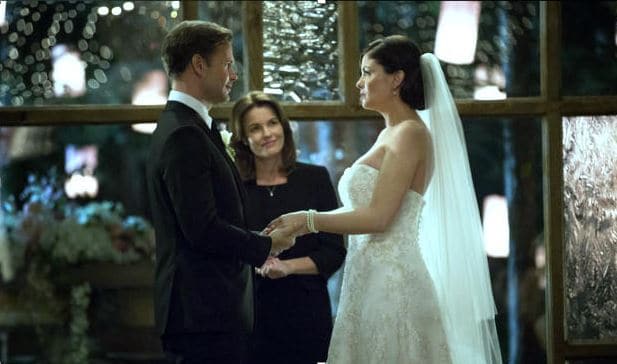 Jo and Alaric have talked on the phone during the day, but finally as Jo’s father leads her in, Alaric lays eyes on his beautiful bride. Jo was looking quite fetching in the strapless shimmery gown. Alaric has a lovely vow, “The most beautiful, hilarious and intimidating woman I have ever met. You inspire me.”

Jo is moved to tears and so am I. The wedding has been wonderful so far, but then Jo starts to shudder. Someone is stabbing her and it is unclear who. Then Kai materializes from thin air. More powerful than ever, with that touch of inimitable humor, the villain is back and though I am nervous as hell it was quite thrilling to see this happen.

That is until Kai uses a surge of power which rings in everyone’s ears and causes the chandeliers and windows to explode. Last scene zooms in on a bleeding Jo and Elena sprawled unconscious on the floor.

– I can’t think of anything clearly after the unexpected end , but weren’t the wedding sets breathtakingly gorgeous today? The pastel shades and fairy lights, white and bright.
– Any ideas on what role will Liv have in the final episode? Her cute black dress was great too. And really, did Tyler have to make it all about himself?
– Had anyone imagined this end? Specially, Kai’s sadistic joke on contemplating waiting till the “death do us part” line before stabbing Jo was both horrific and amazing.

The promo for next week has to be the best ever. It promises to be a sweet and tearful journey saying good bye to Elena.

What did you think of the cliffhanger ending and the beautiful wedding? Let us know in the comments below.

Our romance-themed entertainment site is on a mission to help you find the best period dramas, romance movies, TV shows, and books. Other topics include Jane Austen, Classic Hollywood, TV Couples, Fairy Tales, Romantic Living, Romanticism, and more. We’re damsels not in distress fighting for the all-new optimistic Romantic Revolution. Join us and subscribe. For more information, see our About, Old-Fashioned Romance 101, Modern Romanticism 101, and Romantic Living 101.
Pin this article to read later! And make sure to follow us on Pinterest.
By Rhea Sinha on May 9th, 2015

2 thoughts on “The Vampire Diaries: I’ll Wed You in the Golden Summertime Recap – Till Death Do Us Part”