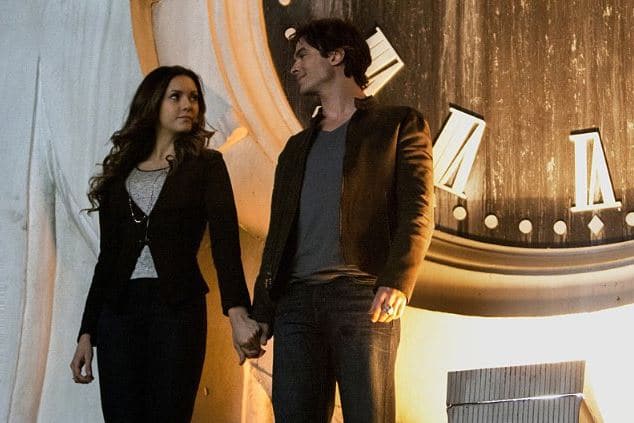 I’d Leave My Happy Home For You Recap

It was party time in tonight’s episode of The Vampire Diaries, but when has Mystic Fall’s parties ever gone smoothly? So, before the night was over Lily was in prison again, Elena and Damon went back to being star crossed lovers and the Gemini twin track just got infused with new life, or should I say new lives! 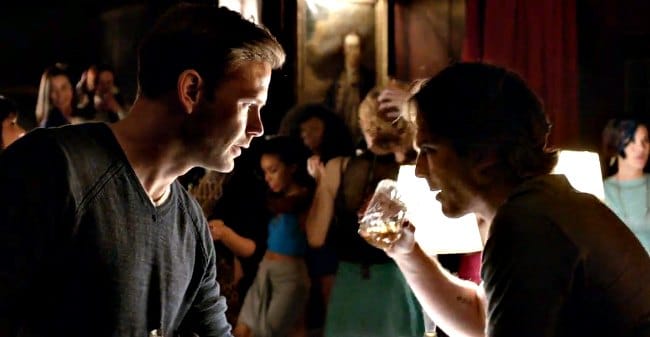 The opening scene has Alaric grading term papers in a deserted school hall, while talking on the phone to his bride to be. He hears a noise, steps out and is abducted by his friends for some celebration. The party turned out to be a place for concerned friends to warn their friends of upcoming disasters. It was good to see all the guys come together to throw this party for Alaric (though we all did miss Jeremy Gilbert).

“We grow old and die of common cold”.

Seeing Alaric and Damon bicker together always raises my spirits. This season, the two ‘grown ups‘ haven’t had a chance to do a lot of catching up. Both have had their own special witch keeping them quite busy. Tonight, however, they get a chance to chat on the topic of Damon’s existential crisis. Alaric has reservations about Damon choosing to be human again. Observant as always, he also points out that Stefan still has no idea what his 150 years old vampire brother is planning. With his special knack for expediency, Damon continues to procrastinate on telling Stefan.

Enzo, Damon’s other friend, also uses the opportunity to remind Damon that he is self centered. According to Enzo, selfishness is the one constant trait in Damon Salvatore.

Matt, who seems to have had enough of supernatural adventures to last him a mortal lifetime, warns Alaric that considering the fact that all their friends are as good as killers (vampires, witches & potential werewolf), Mystic Falls is not a safe place to raise a family. 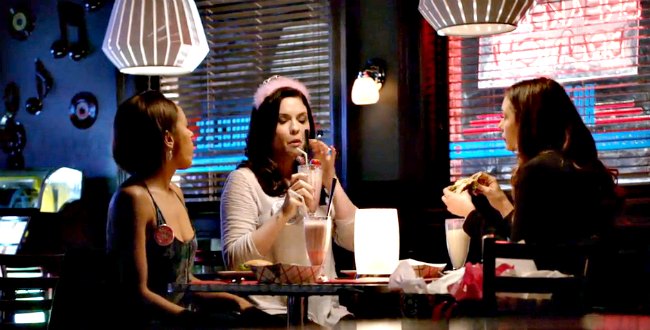 Jo, Elena and Bonnie have a celebration of their own. The girls soon move to an empty diner where the conversation turns to Elena. Damon has confided in Bonnie that he is worried about Elena’s reaction to him deciding to take the cure with her. Jo compares this declaration to a vampire version of a proposal, but Elena is still undecided on how to react.

Jo tries to explain that the risk is all worth it, but Bonnie deducts correctly that Elena fears whether she will continue to be in love with Damon once she turns human. While Elena heads out to sort her feelings, the two witches are faced with an impulsive and irked Lily Salvatore.

Lily is having a tough time controlling her blood lust, and to add to her misery Bonnie destroyed the only hope of bringing back Lily’s travel companions from the prison world. Ruthlessly she stabs Bonnie in the neck with a pair of scissors.

Jo tries to stop her, but the smell of her blood only causes Lily to lose control further. She is about to sink her vampire fangs into Jo who pleads for her life since she is pregnant. Lily draws back to focus on the heartbeat inside Jo. And her single word changes everything for the would be mother. Jo is having twins.

Elena and Damon have some lovely moments in tonight’s episode. A slow build up with Damon constantly reminding Elena how much the cure means to her. From jumping from the clock tower, clearly signifying how time is running out for them, to discussing the perks of being a vampire, the conversation tricks and tempts us into wondering what Elena’s decision would be.

Damon uses his vampire ability to recreate Elena’s old home. They are back on the porch that has witnessed so many poignant moments of Delena romance. It is here that Damon convinces Elena to do as her heart wishes, and take the cure. They have lived a blissful fantasy for long, but he is ready to be human with her. All he desires is to spend a lifetime with her.

“I’m ready for a little reality if you are..”

As soon as she takes the cure, an unexpected miracle occurs. Her memories return in flashes. The first kiss she shared with Damon, their first dance together, their first date… It all returns. And Damon flashes a brilliant happy smile when Elena tells him she remembers it all now.

If only their love story could be this uncomplicated.

Lily Salvatore is drawn to blood and the throbbing vein of strangers. Stefan and Enzo form an uneasy alliance to try to reach out to her, but at this point she seems beyond anyone’s help.

In a surprisingly moving conversation, Stefan talks about how it feels for a ripper to smell and crave for blood. Lily divulges some secrets of her own. Lily Salvatore, mother to two children, was a miserable broken woman whose husband abused and cheated on her. I never did like the Salvatore brothers’ father and this confession only strengthens my dislike for him. Turning into a vampire made Lily powerful and vampire Lily’s family are her travelling companions, not her sons.

She is reckless and almost wild in hunger and wretched with grief. Stabs Bonnie, tried to feed on human Elena, attacks one son and as good as kills the other (Damon gets his neck twisted almost every episode these days). Yet part of me feels sorry for her because of the helplessness she manages to convey at the loss she feels at having left her companions behind.

Finally, her sons as a team manage to capture her and place her in the Salvatore Manor dungeon.

Jo reveals to Alaric that they are going to have twins. They indulge in a brief second of happiness where Alaric declares, “The more the merrier.” Soon, they work out the implications of this news. The imminent threat is not only from Kai, but from the Gemini coven as well because of their tradition of twin merge. Alaric is already swayed by Matt’s earnest appeal and this discovery only adds fuel to fire. He is ready to leave his life, the town and everyone behind, and take Jo and his children away from it all.

I was wondering how easily and without impediment Elena turned human. Then it dawned upon me. The true obstacles lies in what is to follow.

Elena’s memories are back. And I am joyous to see her remember her birthday, where Damon had placed the necklace on her. This was the moment Elena had fallen in love with him. The same moment that Alaric had used to erase all her memories.

With the return of these memories, Elena realizes how much it means for Damon to be a vampire.

Since Elena is not selfish, she cannot agree to Damon’s rash impulsive decision of turning human. Specially, since he had already confessed on the island that his choice would be to remain a vampire for eternity. I don’t know how it will work out for the couple, but for now Elena wants to give Damon a chance to think things through and change his mind if he wants to.

– “Brother from the same mother,” Enzo’s dialogue to Damon had me literally guffawing.
– What is the storyline going to be for Tyler? Clearly he is still having anger management issues and may soon kill somebody again. If he turned werewolf will we get to see Klaus on the show again? That would be a lot of fun.
– Caroline was missing from tonight’s episode and Stefan wanted to share his problems with her.. Aww..
– Who else enjoyed Bonnie asserting herself against mama Salvatore, even though that didn’t end too well for her.
– The end music, close up of Kai, and zombie vampires back from the dead, was fantastic.

Lots of surprises tonight. Elena is human again and Jo is having twins. What do you think about it all? Let us know in the comments..

Damon as human, really? Can’t wait for the pre finale lead up next week.

Our romance-themed entertainment site is on a mission to help you find the best period dramas, romance movies, TV shows, and books. Other topics include Jane Austen, Classic Hollywood, TV Couples, Fairy Tales, Romantic Living, Romanticism, and more. We’re damsels not in distress fighting for the all-new optimistic Romantic Revolution. Join us and subscribe. For more information, see our About, Old-Fashioned Romance 101, Modern Romanticism 101, and Romantic Living 101.
Pin this article to read later! And make sure to follow us on Pinterest.
By Rhea Sinha on May 1st, 2015