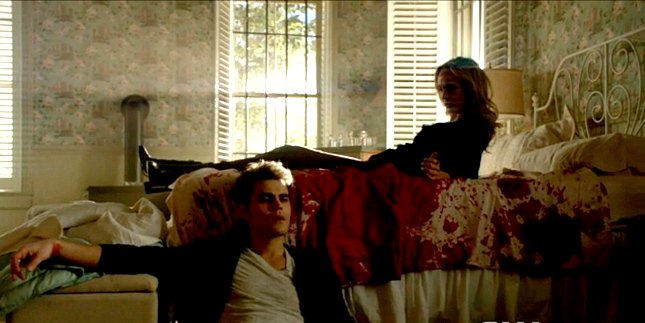 As we enter the sprint to the finale there is still no clear evil or high stakes this season of The Vampire Diaries. The most fun I have had in the later half of this season has been following the exploits of Caroline without her humanity, with Stefan trying hard to tempt her, and finally succeeding in making her shed control. In an earlier season, Stefan had managed to remain without a conscience for almost an entire fun season, but this time the story is moving fast and am not clear why. With a sorry heart, I see Caroline has been successfully reminded she has a heart which contains human emotions, but reaching this point has led to interesting consequences.

“Did I say stand there and Look stupid?” Even in a bloodless state, humanity less Caroline can be fun as she orders Stefan around.

The vampire cure is back! Some time ago, Bon Bon had handed it over to Damon Salvatore (who is officially the worst person ever to hide it). Mamma Salvatore has found the cure and uses it as leverage in the hope of bringing back her dubious freaky travel companions, who by this time must already be best friends with the villain with a conscious, Kai, from the Gemini coven.

While multiple people point out the fact that Damon would much rather have a vampire girlfriend than a human one, in a surprisingly subtle play, Damon asks Elena what she saw for her future. Her immediate answer was, Damon Salvatore. She saw herself with him. These two have come such a long way in their relationship. And it is such a pleasant surprise to see their relationship work out so well. It hardly if ever happens in shows these days.

Damon, however, continues with his lets-pretend-we-are-human-fantasy-game. Elena talks about growing old and having kids. The characteristic gorgeous grimace on Damon’s face is unmistakable. Elena ends up confessing she does miss being human, but if she was human they wouldn’t work out. We are heading towards a parting of ways; I can feel it now. Elena wants to settle for a vampire life as long as she gets to spend it with Damon. I am turning as helpless as Damon by the second.

Later, both Bonny and Lily Salvatore notice and remind Damon that he isn’t too keen to pass on the cure to Elena. Damon is a selfish vampire after all. His cold mother,however goes so far as to vengefully drop it lightly in front of Elena and leave the room for the young couple to sort out their confusion.

In the more interesting storyline, this episode focuses on Caroline resisting flipping back her humanity switch. She and Stefan are locked inside a room. Apparently, vodka is harmful to a desiccating vampire. Soon enough, Caroline figures out Stefan has already turned back on his human feelings. But not before she has instructed him to burn the letter left to her by her mother.

I do miss Sheriff Forbes. I’m sure Damon misses her too. It was wonderful to see her back, if only for a few minutes in a memory when Stefan manages to get into Caroline’s head and show her that her mother would be heartbroken to see her daughter in this state.

“No loss. No pain. No grief” – Caroline Forbes

Caroline was not willing to listen, but finally gives in and places her hand in Stefan’s as he shows her his memory of Sheriff Forbes. I almost hoped he would show her the scene when she sang at the funeral. Candice had sung beautifully and Stefan had clearly been bedazzled by it, falling irrevocably and firmly in love that very instant.

The Sheriff does a bit of matchmaking in the memory we do get to see. It is good to know this union has her blessing. We see her leave a letter for her daughter, but we do not get to see what she wrote in it. Caroline is left standing outside the house and her mother starts to blur away.

Finally, the damn breaks and a daughter gives in to the overwhelming grief for her dead mother. She touches the ashes of the letter with her hands. Her mother is not coming back. Will we really never know what Sheriff Forbes wrote?

Like everything with Caroline, coming to terms with her feelings is also relatively controlled. Stefan fears she does not want to see him, however Caroline does meet him, though not quite ready to talk yet. “You.. Us.. This..“. She leaves without completing her sentences. Much to my frustration, Stefan allows her to leave.

I almost chalked this up as the romantic scene of the episode. That was before Damon and Elena’s conversation.

A lifetime of Love

“Because your fantasy scared the hell out of me“.

His mother had just announced that he had hidden the cure to vampirism from Elena and the couple are still on talking terms. Goes to show how steady their relationship has become.

“because I am an idiot.. and I am selfish.. and I don’t want to lose you” – Damon Salvatore

Damon confesses his fear, admitting how he is scared everything will change if Elena becomes human.  To underline his need for her, he makes it clear an eternity without Elena is unbearable for sure. Which is why Damon Salvatore will become a human along with the love of his existence, Elena Gilbert. He cannot face his future without her, so he will become human too.

– What is happening with Bonny and her erratic bursts of temper? It seems she might be finally putting herself first.
– Mamma Salvatore in a restaurant was quite charming to watch. Nicely done touches of holding her back straight, talking in a calm polite tone all leave an authentic feel. This woman really feels she’s from 1903.
– What exactly is Enzo’s plan? Is he on Lily’s side?
– “I fear it got the best of me“. I did not believe it earlier, but am getting convinced Lily Salvatore is genuinely guilty of her ripper days, and sadly mamma ripper is back.
– Jo and Alaric … cute, but boring. Hope Alaric as a father does not lose his edge. Seeing him happy is good, but he needs to slay a few vampires. Oops, that’s tough because there don’t seem to be any evil guys around this season. The only semi evil is stuck in the past.

What do you think of Damon’s love and Caroline’s misery? Let us know in the comments..

Waiting for next week to find out will Damon and Elena become human again. And why are they jumping off a ledge?

Check out our other TV RECAPS including The Originals.

Our romance-themed entertainment site is on a mission to help you find the best period dramas, romance movies, TV shows, and books. Other topics include Jane Austen, Classic Hollywood, TV Couples, Fairy Tales, Romantic Living, Romanticism, and more. We’re damsels not in distress fighting for the all-new optimistic Romantic Revolution. Join us and subscribe. For more information, see our About, Old-Fashioned Romance 101, Modern Romanticism 101, and Romantic Living 101.
Pin this article to read later! And make sure to follow us on Pinterest.
By Rhea Sinha on April 24th, 2015