I’m Thinking of You All The While Recap 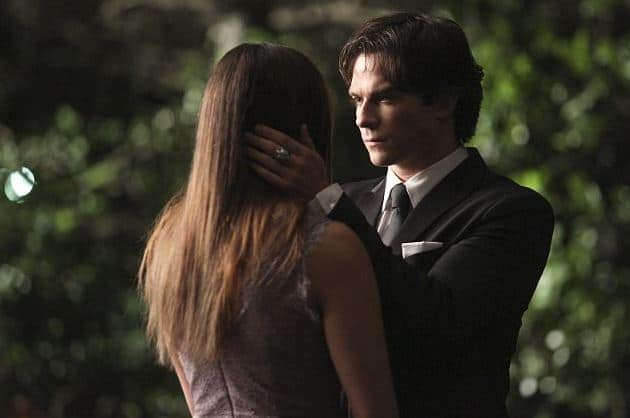 The last episode of Season 6 of The Vampire Diaries, “I’m Thinking of You All the While,” was a phenomenal roller coaster ride, from shocking deaths to tearful goodbyes. Relentlessly fast paced, the storylines flowed flawlessly between villainy, friendship, revenge, love and much more tonight. I confess that I have questioned the pacing of this season of the show, the motives behind retaining Kai as the central villain and most of all the overall destination. The finale answers all my questions in one of the most stirring unforgettable forty minutes this show has given us in a long while. 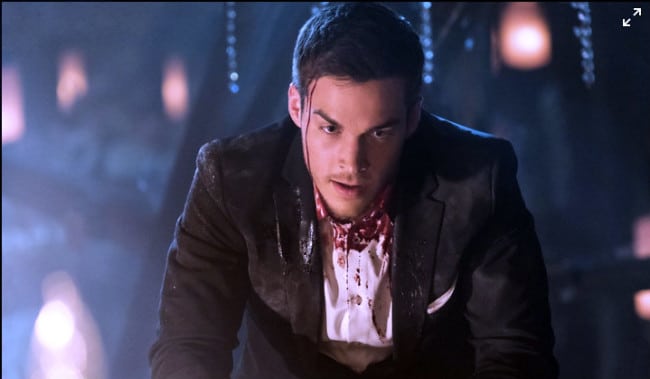 “I have to find humor in this, because the alternative would be to say goodbye and I am not ready for it.”

Not too long ago, we had met a girl grieving the loss of her parents, fighting to endure each day. She was a charming teenager with her diary. She was Elena Gilbert. She had friends, a regular life, and then she met a vampire. That was six seasons ago.

As this episode starts, we don’t know for sure what is going on. Damon lies in the middle of the deserted forest road where Elena shows up. He had met her here the first time and known she needed passion, excitement and a love that would consume her. Tonight, he wants to dance.

We come back to reality where a bloodbath occurred in place of a happy wedding. Jo lies dead in Alaric’s helpless shaking arms. Damon’s blood fails to revive Elena. Caroline, Stefan and all of Gemini Coven lie injured, nursing wounds and cherished loved ones who are hurt.

Damon rescues Elena and rushes to a hospital while Jo’s father starts up a chant. The coven chants with him, but Kai is suspiciously unfazed. Before the coven can do any harm to him, Kai picks up a broken shard and stabs himself in the neck.

In true Gemini tradition, with Kai dead, the rest of the Gemini coven will be dead soon. Jo’s father staggers and falls. Liv and Tyler both lie mortally wounded side by side. They would both not make it alive. She forces an unwilling helpless Tyler to smother her so he can turn to a werewolf again and get a chance at life. He does as she pleaded, but not before a declaration of his love for her.

In the first 10 minutes, Jo is dead, Liv is murdered by Tyler, the villain is dead, the Gemini coven close to death and Elena is in some state of unconsciousness from which even vampire blood is unable to bring her back.

Meanwhile, Enzo has managed to save Caroline and Stefan (Poor Alaric, is left all alone!). Stefan confronts his mother guessing correctly that this tragedy is in some way brought about by Lily Salvatore.

The scenes segue between her and the dead Kai, who has just started to wake up. He is a vampire, so able to resurrect from the dead. A brilliant move that I had not anticipated at all. Lily gave Kai her vampire blood. 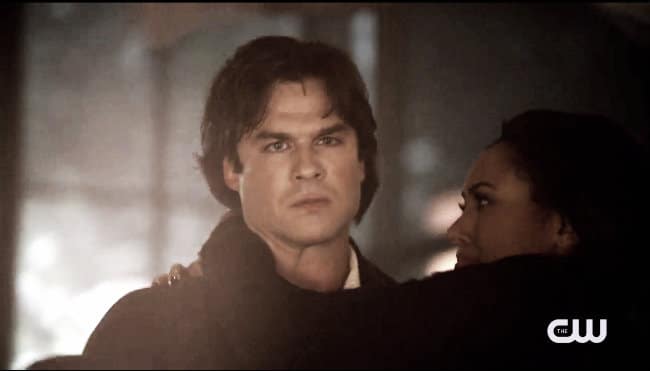 It was most heartbreaking to see Alaric mourning all alone with Jo’s lifeless body. Alaric tries to kill Kai by shooting at him. When he realizes that Kai has turned indestructible, in possibly the most tragic moment of the episode, Alaric turns the gun at himself and tries to take his own life. The man is devastated and defeated.

Luckily, Tyler shows up, and with his werewolf fangs, he bites Kai. Will Kai die this easily?

He shows up in the hospital (and I was wondering why go there) and asks Damon for a cure. Damon makes a snide remark about a cure in New Orleans. The creators are having a little fun with inside jokes (We do miss the originals showing up to brighten Mystic Falls).

Kai finally discloses his devious plan. He has bound Bonnie’s life with Elena’s. He believes Damon will eventually end up killing his best friend to save the love of his life. Indeed, we have seen him do something like this to save Elena numerous times before. Hadn’t he turned Bonnie’s mother into a witch for the very same reason?

Damon is furious and raving mad at Kai’s scheme, but does not rush off to take Bonnie’s life. It just goes to show how much Bonnie’s friendship means to him. The old Damon would have chosen Elena over everyone in the blink of an eye.

In the midst of all this, Stefan and Caroline get to share a precious few moments. Caroline remarks about how Elena was Stefan’s soul mate. I didn’t really like how Stefan credits Elena mostly for redeeming Damon and making Stefan forgive him. There was more to Stefan and Elena’s relationship than Damon, and the entire focus on this aspect felt a bit forced to me in this scene. Of course, it paved the way for Stefan to let Caroline know he still loves her and is waiting for her.

Back at the wedding location, Bonnie comes to face Kai. Now that he is a vampire she can cause him extreme agony with the torturous ringing in his ears. He goads her further, but it looks like Bonnie is winning. Kai is able to use the magic in the werewolf venom to cure himself. Though I am a bit confused about the specifics, it is all an exhilarating watch, until Kai slams Bonnie against the wall bedecked with twinkling strands of lights.

Damon shows up and it feels like he is willing to let Bonnie die. Bonnie looks up at him in anguish, but he leaves and you can clearly see tears roll down from her eyes as she gives up all hope and curls up to await her death, knowing Kai has won. However, it was simply a ruse and Damon appears behind a gloating Kai only to literally rip his head apart. Kai is dead and gone for good.

With a fiercely protective gesture, Damon feeds Bonnie with his blood and picks her up in his arms, carrying her to safety. 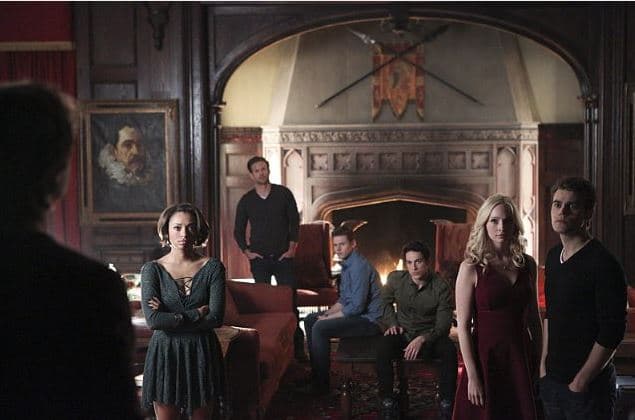 Next day, the Salvatore mansion door opens and Bonnie and Caroline step in while the sun shines behind them. The camera sweeps across to show all the men standing. We know now what has been planned. Elena will remain in her stupor, giving Bonnie a chance to lead her life.

In what has to be one of the most touching scenes to date, the girls are all with Elena. They have entered her thoughts and share her final minutes before she is locked away in a coffin awaiting her time to wake up (Sleeping Beauty style). The farewells are said and finally Elena and Bonnie remain.

“We both get everything we want, just not at the same time.”

Elena acknowledges how every time Bonnie has made sacrifices for her best friend. Now it is Elena’s turn. So, Bonnie gets to live her life while we bid Elena goodbye. Paying homage to an iconic moment of the story, Elena pleads Bonnie for her favorite magic tricks. White down feathers float around the two best friends as they say goodbye. 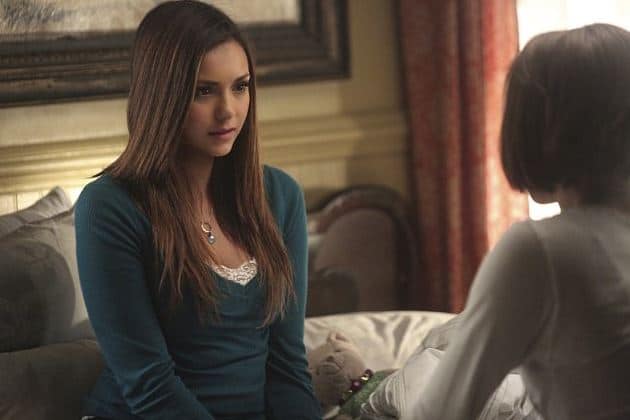 All throughout this time, various characters have been meeting Elena in her thoughts. She wishes for Alaric to be strong and Tyler to find a life that he wants to live. A special treat for all fans was the return of baby brother Jeremy. Even he gets to say goodbye, thought the scene was a bit too rushed for my liking.

With Stefan, Elena takes a hike to the mountains in her thoughts where she first realized she had not wanted to ever become a vampire.

Then she stands with human, loyal and good Matt on the Wickery bridge. Together they bid adieu to human Elena Gilbert. The lovely bewitching girl we had met six years back.

I would say that is the only problem with this episode. How can we ever be ready to accept she is gone and we have to move on? Forty minutes of a eulogy for a character who is part of our lives for six years. Bittersweet sorrow lies in this beautiful parting.

The creators kept the best for the last. Her coffin has to be kept safe and it is time for Damon to talk to her one last time before he waits for a lifetime to have her back with him. They are again in the ethereal forest lane. Verdant ambient light filters through the leaves as Elena tells Damon she knew he would keep his best friends safe. She urges him to be happy.

He requests for a last dance. And it is a dance of celebration of Damon Salvatore and Elena Gilbert’s all consuming passionate everlasting love. He raises her body and swirls around. She twirls with him and as he dips her they kiss. 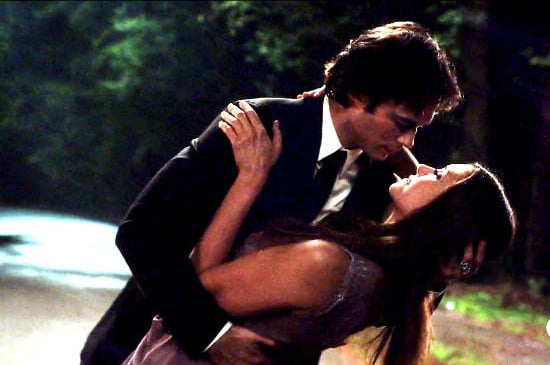 They  continue to waltz as the scene shifts to Stefan telling Caroline she has been a friend and made him laugh, dance and be happy. He will wait for her. The words are true for both the couples. These few minutes of The Vampire Diaries will remain ingrained in our memories forever, for its sheer beauty and sublime portrayal of love and how it can make us feel. It is final. We all have to bid our main character goodbye. It has been truly wonderful knowing you Elena Gilbert.

Elsewhere, Enzo and Lily have found her travel companions. And in the coming season, it looks like Mystic Falls is clearly not a safe place. Has Damon turned vigilante?

What was your favorite memory of Elena today and in the last six years of The Vampire Diaries? Share with us in the comments below.

See you next season!

Our romance-themed entertainment site is on a mission to help you find the best period dramas, romance movies, TV shows, and books. Other topics include Jane Austen, Classic Hollywood, TV Couples, Fairy Tales, Romantic Living, Romanticism, and more. We’re damsels not in distress fighting for the all-new optimistic Romantic Revolution. Join us and subscribe. For more information, see our About, Old-Fashioned Romance 101, Modern Romanticism 101, and Romantic Living 101.
Pin this article to read later! And make sure to follow us on Pinterest.
By Rhea Sinha on May 15th, 2015