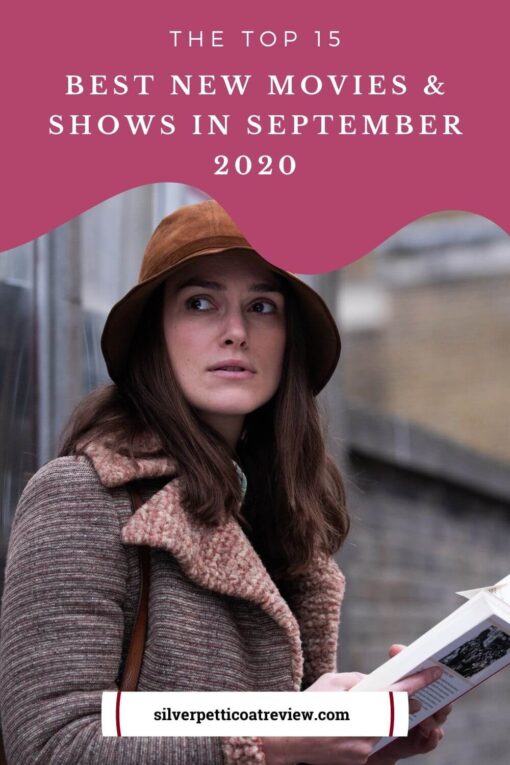 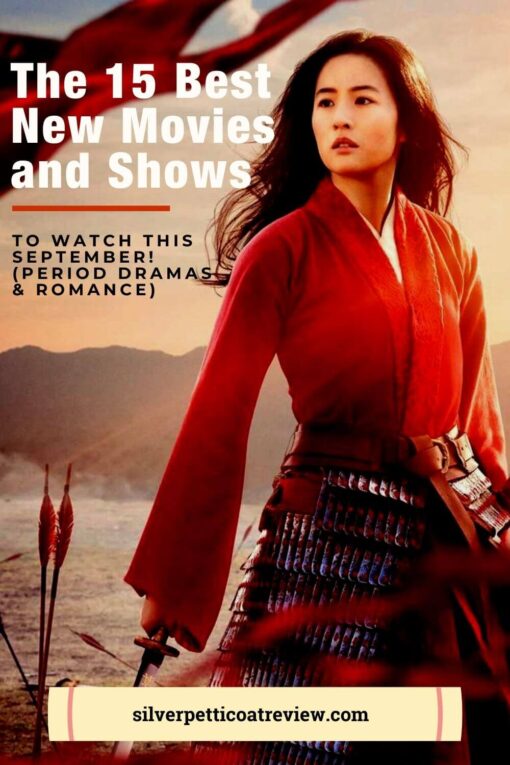 Your September 2020 Watchlist: From romance and period drama to Hallmark’s Fall Harvest premieres, and even to some fantasy, mystery, and the inspirational, these new movies and shows are the best of what’s new to streaming, theaters, and TV this month.

New movies and shows are once again picking up steam with the fall season now upon us. And as theaters begin to re-open and Fall TV premieres (although less than usual) commence, there is much to choose from this month!

So, I’ve narrowed it down to the best possible choices – with less explicit content. I focused mostly on period dramas as well as new movies and shows with romance. But you’ll find a little bit of everything on the list below. At the end of the post, I also included a few additional streaming recommendations!

NOTE: Premiere dates for the new movies and shows are subject to change.

Netflix Synopsis: “Commander Emma Green leaves behind her husband and daughter to lead an international crew of astronauts on a perilous three-year mission to Mars.”

Why You Should Watch: Besides the fantastic cast (Hilary Swank and Josh Charles), Jason Katims also directs. In the past, he penned such series as Roswell, Parenthood, and Friday Night Lights. If you love sci-fi or romance, then Away promises to intrigue.

How to Watch: Stream this new show on Netflix.

HBO Synopsis: “When intelligence agents around the world come under attack from alien forces, MI6 turns to the only person who can help: The Doctor.”

Why You Should Watch: Doctor Who is always entertaining and full of adventure. Plus, this season, you won’t want to miss a few fun surprises! So, if you didn’t have the chance to watch season 12 when it aired earlier this year, now will be the perfect time to catch up.

How to Watch: HBO MAX

Why You Should Watch: The screenplay comes from Jack Thorne (the man behind Harry Potter and the Cursed Child and His Dark Materials). Besides that, the movie also boasts a fantastic cast, including Millie Bobby Brown, Henry Cavill, Sam Claflin, Helena Bonham Carter, Fiona Shaw, and Burn Gorman. If you enjoy period mysteries and classic novel retellings, Enola Holmes looks like a sure bet.

How to Watch: Netflix.

Fox Synopsis: “A southern Gothic family drama in which wealth, power and religion intersect – more correctly, collide – with outrageously soapy results. Meet the Monreauxes, a mega-rich Southern family famed for creating a successful Christian television network. On the cusp of launching a digital retail arm of the company, the family’s patriarch, Eugene, dies in a plane crash, leaving his wife, Margaret, to take charge of the family business.

Not surprisingly, Eugene’s apparent death greatly impacts the family, who are stunned to learn that Eugene fathered three illegitimate children, all of whom are written into his will. Now, Margaret must use her business savvy and Southern charm to control her newly legitimized heirs, whose very existence threatens the Monreaux family name and fortune.”

Why You Should Watch: If you enjoy soapy melodrama shows with touches of satire like Dynasty or Desperate Housewives, this show could be a fun watch. Plus, it stars Kim Cattrall.

How to Watch: Fox Network

IMDb Synopsis: “The story of feminist icon Gloria Steinem’s itinerant childhood’s influence on her life as a writer, activist and organizer for women’s rights worldwide.”

Why You Should Watch: Julianne Moore and Alicia Vikander both star as Gloria Steinem at different ages. With an all-star female cast and directed by Julie Taymor (Frida, Across the Universe), this historical drama looks promising.

Official Hallmark Synopsis of Love at Look Lodge: “Lily dreams of being a hotel event coordinator and is thrilled when she’s given the chance to do so by helping Noah, a hotel guest, finish planning his sister Justine’s wedding at a remote lodge.”

Official Hallmark Synopsis of JL Family Ranch: The Wedding Gift: “When Henry proposes it looks like Rebecca will get her fairytale ending until her daughter invites a visitor from her past to the ranch that will change the Petersons and Landsburgs forever. Starring Jon Voight, Teri Polo, James Caan, Bo Derek, Dylan Walsh and Trevor Donovan.”

Why You Should Watch: Watch for sweet, romantic escapism!

How to Watch: Watch the first two movies on the Hallmark Channel, and the third on Hallmark Movies & Mysteries.

7. Julie and the Phantoms, Season 1

Netflix Synopsis: “Julie lost her passion for music when she lost her mom. But when three ghostly guys appear and lift her spirits, they decide to start a band together.”

Why You Should Watch: If you are looking to watch a cute show with the entire family, this one looks adorable! It is perfect for middle-grade teens too.

Netflix Synopsis: “Sparks fly when a crusading but cash-strapped attorney takes on a charming client looking to sue a dating site that guarantees its users will find love.”

Why You Should Watch: If you’re in the mood for a feel-good romance, this one looks great! Plus, Rachael Leigh Cook has always been good at acting in rom-coms.

Synopsis: “A group of women hatch a plan to disrupt the 1970 Miss World beauty competition in London.”

Why You Should Watch: If you enjoy British feel-good movies with excellent actors, then Misbehaviour should be on your watchlist! It stars Keira Knightley, Gugu Mbatha-Raw, Greg Kinnear, Jessie Buckley, Lesley Manville, Keeley Hawes, Ruby Bentall, Rhys Ifans, Phyllis Logan, and more! Plus, Philippa Lowthorpe directs. She has previously directed numerous period dramas for television, including Call the Midwife, The Crown, and Jamaica Inn.

IMDb Synopsis: “A young Chinese maiden disguises herself as a male warrior in order to save her father.”

Why You Should Watch: Mulan is one of the most anticipated movies of the year. The high-budget production looks fabulous. Plus, we already know it has a great story. And even better, Niki Caro directs, the director behind award-winning films like Whale Rider and The Zookeeper’s Wife.

Premiere Date: September 4, 2020 (If you want to wait until you don’t have to pay the high price to watch, you can wait until December 4).

Synopsis: “Set in a dangerous, alternate world where racism divides society, Noughts + Crosses follows two young people Sephy and Callum, who are divided by their colour but united by love.”

Why You Should Watch: If you’re in the mood for a unique star-crossed love story, this British Drama series should catch your interest.

How to Watch: Peacock

BritBox Synopsis: “Colin Firth in his wet shirt was the television moment of the 90s. This irresistible, sophisticated and sexy saga launched Firth and Jennifer Ehle to international fame and inspired a modern Jane Austen renaissance.”

Why You Should Watch: If you’ve never seen the remastered version of Pride and Prejudice, it’s gorgeous! Plus, one can never have enough romantic chivalry from Mr. Darcy and wit from Elizabeth Bennet.

IMDb Synopsis: “An intimate portrait of Robin Williams and his invulnerable spirit, Robin’s Wish is the story of what really happened to one of the greatest entertainers of all time – and what his mind was fighting.”

Why You Should Watch: If you love Robin Williams as an actor and appreciate uplifting documentaries, this one looks like a must-watch movie.

Acorn TV Synopsis: “Set against the backdrop of the stunning Marlborough Sounds in New Zealand, Maggie and Tom arrive to escape his oppressive family and start a business. When Tom disappears, buried secrets and family plots make paradise less than perfect.”

Why You Should Watch: This New Zealand thriller looks like an intriguing mystery series full of suspense and twists! If you like small-town conspiracy thriller series, this new miniseries looks promising.

How to Watch: Acorn TV (New episodes every Monday).

IMDb Synopsis: “Armed with only one word, Tenet, and fighting for the survival of the entire world, a Protagonist journeys through a twilight world of international espionage on a mission that will unfold in something beyond real time.”

Why You Should Watch: If you enjoy Christopher Nolan’s previous films such as Inception and the Batman films, this sci-fi action movie should be at the top of your list. Tenet has an all-star cast, including Robert Pattinson, John David Washington, Kenneth Branagh, Himesh Pitel, etc.

How to Watch: In theaters nationwide.

What new movies and shows do you plan to check out in September? Let me know in the comments!