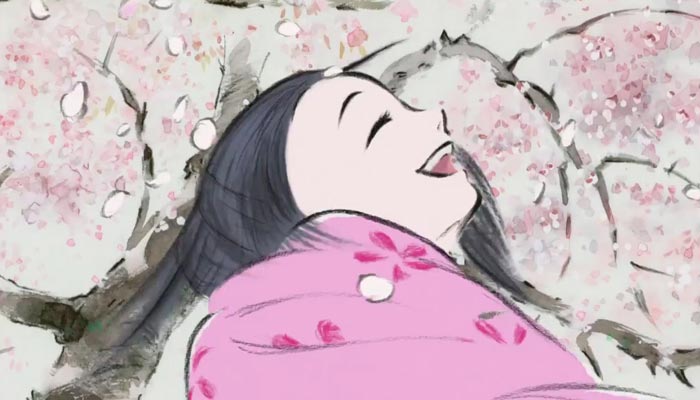 Found inside a shining stalk of bamboo by an old bamboo cutter and his wife, a tiny girl grows rapidly into an exquisite young lady. The mysterious young princess enthralls all who encounter her – but ultimately she must confront her fate, the punishment for her crime. 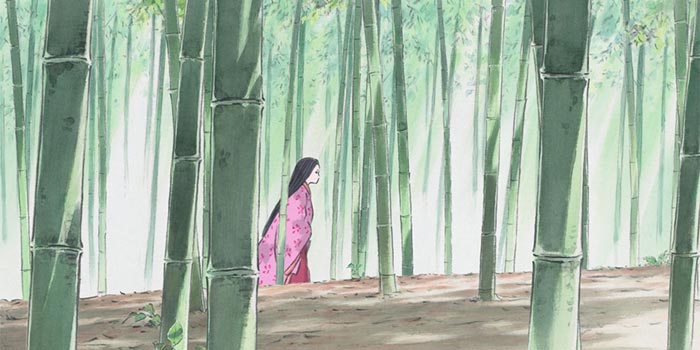 Every young girl wants to be a princess, live in a palace and marry a prince.  Or does she? In all the hype about Cinderella, it might be easy to overlook another recent film about a fairytale heroine.

Studio Ghibli’s latest film, from director Isao Takahata, retells the Japanese folk tale of Princess Kaguya, also known as the Tale of the Bamboo Cutter.  The heroine of this story does not dream of ball gowns and princes. Far from it. Instead, it is her father who has high ambitions for her, while she wants nothing more than to enjoy the natural world and play with the children of foresters. 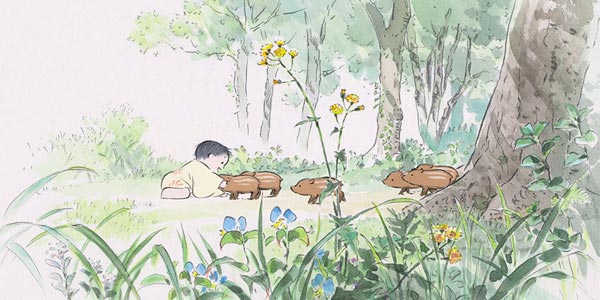 The tale begins, like many folk tales, with a miracle child adopted by a childless couple.  As she grows (and she grows miraculously quickly), her father becomes more convinced that his heaven-sent daughter should be living the life of a true princess. Using gold that he finds in the bamboo stalks, he builds a mansion, hires a lady tutor, and sets the girl up as Princess Kaguya.

It isn’t long until princes are fighting over her hand in marriage, and even the Emperor himself wants to wed her.  But Kaguya does everything she can to resist.  And she can’t help thinking that this has happened before. That in a previous life, she rebelled and ran away from a place of heavenly perfection in order to experience the richness of life on Earth, with all its mistakes and imperfections.

In many ways, this is a straight retelling of the old tale. The watercolor style of the animation resembles a child’s picture book come to life, and the score by Joe Hisaishi sounds very traditionally Japanese. The episode of the five suitors is told in detail which those who are unfamiliar with the story might find tedious.  But there are some differences.

In true Studio Ghibli style, there is great emphasis on mankind’s relationship with nature and the need to work in harmony with it.  Indeed, the carefully observed depictions of creatures like frogs, butterflies and wild boar piglets are one of the movie’s charms.  Kaguya is also a typical Ghibli strong heroine.

There is much more emphasis on her motivation, her feelings.  She wants to be free and independent, not restrained either by layers of Heian Period kimono or by an arranged marriage.  This makes her seem a much more modern heroine, despite the ancient nature of the story.  But towards the end of the film, she seems contrary, a teenager who doesn’t know what she wants, thinking she can have her cake and eat it.  I think we can all relate to that, too.

There is also a new character. Sutemaru, a teenage boy from a village of foresters, who make their living producing lacquered bowls from the trees. He is the true love of Kaguya’s life, the one she would stay with if all her choices were her own. He comes back again throughout the story, a reminder of both the hardships and the freedom of the life she has left behind. It is perhaps because of this character that the Emperor is less sympathetic than in other versions.

In the version I know, Princess Kaguya becomes friends with the Emperor, despite threatening to leave the earth if she is forced to go to his palace. They write to each other, and she sends him a gift when she has to go home.  I always felt sorry for him at the end of the story. In the film, however, the Emperor seizes on Princess Kaguya like something out of The Tale of Genji, expecting all women to find him irresistible. He makes it clear that Kaguya would be one of his many wives, which he appears to collect like trophies. No wonder it is this final demand that drives Princess Kaguya to call on her true family to deliver her from her fate. 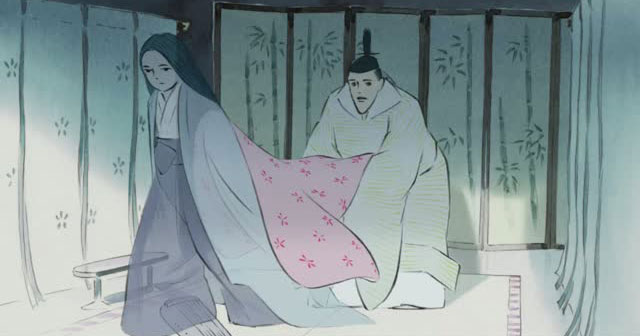 There is emphasis throughout the film on the cycle of birth, death and rebirth, and the idea of a fate that repeats itself through past and future lives. As a non-Buddhist, I suspect there is much I have failed to grasp about that. But it also seems to speak about the shortness of life on Earth and the possibility that a beloved child may be reclaimed by heaven. Until that day, who decides what is best for the child? Does mother (or father) always know best? Or should the child follow her own heart? One of the great things about this film (as with all Ghibli films) is that there are no easy answers. You have to watch it and decide for yourself.

Our romance-themed entertainment site is on a mission to help you find the best period dramas, romance movies, TV shows, and books. Other topics include Jane Austen, Classic Hollywood, TV Couples, Fairy Tales, Romantic Living, Romanticism, and more. We’re damsels not in distress fighting for the all-new optimistic Romantic Revolution. Join us and subscribe. For more information, see our About, Old-Fashioned Romance 101, Modern Romanticism 101, and Romantic Living 101.
Pin this article to read later! And make sure to follow us on Pinterest.
By Elizabeth Hopkinson on March 30th, 2015