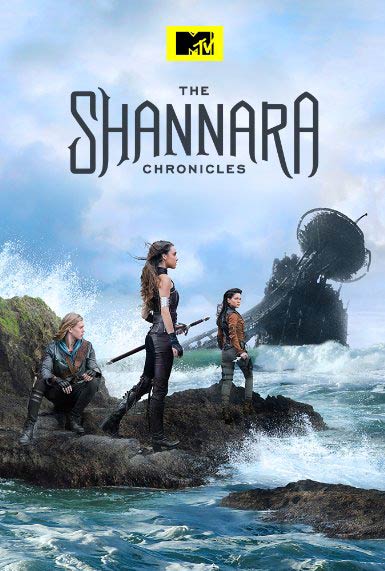 Several years ago, I read a fantastic fantasy called The Elfstones of Shannara, so when I heard that an adaptation of the book was in the works, I was over the moon ecstatic. What could go wrong with such a great story to work with? Unfortunately, the two-hour premiere of The Shannara Chronicles was shaky at best.

In The Shannara Chronicles, the Ellcrys Tree is dying, a magical tree that keeps demons at bay. With each leaf that falls, a new demon from the demon world emerges into the Four Lands. But with magic a distant memory and the belief of the magic in the tree no more than folklore, the fate of the world lies in the hands of the elf princess Amberle who the tree shares visions with, a halfling (half-elf) named Wil whose father left some magical elfstones, and the last of the druids named Allanon (played by Arrow’s Manu Bennett) who serves as Wil’s mentor into the world of magic. Basically, our heroes have to save the tree before the world falls into ruin.

The story very much plays out like an archetypal quest with our heroes going on a journey. And for those who love quests like Lord of the Rings, Star Wars, and Legend of the Seeker, you may enjoy this series as well. However, the execution of the quest story is decidedly weak in comparison to all three. Will’s entrance into his quest is lame and the actor Austin Butler is, well, pretty terrible. He has absolutely zero charisma which becomes all the more glaringly obvious when he works opposite Manu Bennett’s brilliant portrayal of Allanon.

Indeed, Allanon is by far the best part of the show, other than the wonderful source material the writers have to work with. The side love story with him and the King’s sister who has aged while he went into a Druid slumber (thus staying young in the process), was particularly interesting. Manu Bennett truly knows how to carry a scene.

Aside from Bennett, John Rhys-Davies (Gimli in LOTR) also works well in this LOTR style show as the Elven King, though thus far he has very little to do. That being said, when he and Bennett share a scene, it’s like a breath of fresh air next to the rest of the cast. Poppy Drayton is decent as Amberle and Ivana Baquero has potential as Eretria (the Rover girl who serves as the second girl in the main love triangle), however, there isn’t much hope for a good portion of the cast. Although, several of the actors would likely improve with a better script.

Ah, yes! The script and the dialogue are rather embarrassing. Written by Al Gough and Miles Millar of Smallville fame, they prove here that perhaps high fantasy just isn’t for them. The dialogue is so bad in parts, that I cringed at the absurdity. Elves talking about boyfriends? Please, no. Seriously, though, the show needs to be cleaned up and the writers need to study how to write fantasy dialogue. Modern language like “knocked up” is jarring and one can only hope they hire someone to fix this if given a second season.

Aside from the dialogue, the New Zealand scenery is beautiful and works well to set the scene. The special effects for The Shannara Chronicles‘ low budget are also decent. Then there are the costumes…While a low budget can still be believable, these costumes were not. Perhaps I just didn’t like how they looked, but this also needs work in my book.

Basically, the story is great (Terry Brooks IS an awesome fantasy writer), Allanon is simply fabulous, but the show as a whole needs some reworking. Hopefully, season 1 will finish book 2 so season 2 would then be free to follow book 3. Why, you may ask? Because then the writers would have the chance to change the main characters and lose Austin Butler who is a serious weak link. He makes Wil about as interesting as unbuttered toast. Richard from Legend of the Seeker (which I adore) he is not. And I honestly can’t buy him as the love interest either. The scene between him and Eretria in the bathtub is so bad I almost turned off my TV…

That all being said, as someone who loves the original book, I will continue to tune into The Shannara Chronicles in the hopes it will improve with time. Until then, I plan to, at least, enjoy Manu Bennett as the intriguing Druid, Allanon!

What did you think of The Shannara Chronicles? Will you be tuning in? Sound off below…

Our romance-themed entertainment site is on a mission to help you find the best period dramas, romance movies, TV shows, and books. Other topics include Jane Austen, Classic Hollywood, TV Couples, Fairy Tales, Romantic Living, Romanticism, and more. We’re damsels not in distress fighting for the all-new optimistic Romantic Revolution. Join us and subscribe. For more information, see our About, Old-Fashioned Romance 101, Modern Romanticism 101, and Romantic Living 101.
Pin this article to read later! And make sure to follow us on Pinterest.
By Autumn Topping on January 8th, 2016

2 thoughts on “The Shannara Chronicles Review – A Disappointing Beginning”