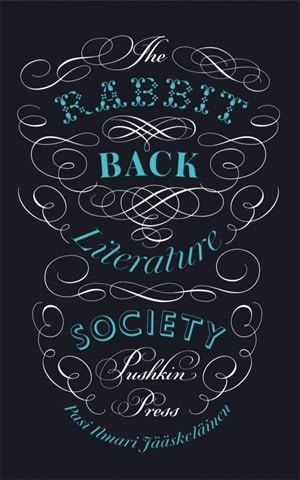 ‘She came to realise that under one reality there’s always another. And another one under that.’

Only very special people are chosen by children’s author Laura White to join ‘The Society,’ an elite group of writers in the small town of Rabbit Back.

Now a tenth member has been selected: Ella, literature teacher and possessor of beautifully curving lips.

But soon Ella discovers that the Society is not what it seems. What is its mysterious ritual, ‘The Game’? What explains the strange disappearance that occurs at Laura’s winter party, in a whirlwind of snow? Why are the words inside books starting to rearrange themselves? Was there once another tenth member, before her?

Slowly, disturbing secrets that had been buried come to light…

In this chilling, darkly funny novel, the uncanny brushes up against the everyday in the most beguiling and unexpected of ways.

Review: The Rabbit Back Literature Society

As winter draws on (in the northern hemisphere anyway – sorry, Australia!) many of us like to choose stories from cold, snowy countries. So what better than a story from Finland, the official home of Father Christmas, according to some!

I enjoyed The Rabbit Back Literature Society very much. It is one of those books that is easy to read, but has a lot of hidden depths and symbolism that will probably take several re-readings to fully grasp. It takes place in a small Finnish town, where culture is dominated by Creatureville, a children’s book series written by a local author, and the literature society she founded with nine gifted children, now successful authors. Ella, a language and literature teacher, has come back to the town to live with her mother and her father, who suffers from Alzheimer’s disease. During a school exam, she discovers a copy of Crime and Punishment in which the story has been changed. This leads her from one mystery to another, as she tries to uncover the truth about the literature society and the author, Laura White.

In many ways, it is quite a similar book to Neil Gaiman’s The Ocean at the End of the Lane, and I think people who enjoyed that book would enjoy this too.

I would describe the book as more magic realism than fantasy, as many of the strange occurrences are never fully explained. This may be a little frustrating to regular fantasy readers. But one of the main themes of the book is, “How reliable is memory?” (especially childhood memory).  “How can you be sure what really happened? Does reality depend on our perception?” And – without giving away spoilers – the ending makes you completely re-evaluate the whole story. In many ways, it is quite a similar book to Neil Gaiman’s The Ocean at the End of the Lane, and I think people who enjoyed that book would enjoy this too.

I found the idea of the Creatureville books fascinating. We find out more about this world as the book goes on, and details of the creatures who inhabit it. This being a Finnish story, I expect they are meant to make you think of the Moomins, children’s characters from Finland who became known worldwide. Absolutely everything in Rabbit Back is named after them. Every garden is full of statues of mythological creatures. There are even people who carry out “mythological mapping”: going to sleep in your garden, and then telling you what mythological creatures live there. But there is also the question of whether the strange creatures in the books are based on real people. Laura White, for example, seems to be Mother Snow. This, too, blurs the boundary between myth and reality.

I hope some of you will give this book a try: it’s definitely worth it. It will leave you thinking for a long time after you’ve stopped reading. And if you want to know more about Finland, my friend Tarja Moles has written an excellent  Xenophobes Guide to the Finns, which is short, easy to read and very funny.

For real authenticity, I would say a home-grown Finnish TV series, with English subtitles.  Maybe it’s already been done!!

Our romance-themed entertainment site is on a mission to help you find the best period dramas, romance movies, TV shows, and books. Other topics include Jane Austen, Classic Hollywood, TV Couples, Fairy Tales, Romantic Living, Romanticism, and more. We’re damsels not in distress fighting for the all-new optimistic Romantic Revolution. Join us and subscribe. For more information, see our About, Old-Fashioned Romance 101, Modern Romanticism 101, and Romantic Living 101.
Pin this article to read later! And make sure to follow us on Pinterest.
By Elizabeth Hopkinson on December 4th, 2014