Anyone who enjoys films that leave you asking, “what just happened?” is missing out if they’ve yet to see The Prestige. There are some films that leave you feeling torn after you finish watching. This is one such cinematic masterpiece. As the credits roll, you’re likely to have one of two emotions. One that might leave you with a heavyhearted feeling difficult to shake. Or the other which is going to leave you with a burden that might be sitting atop your shoulders. This one leans more towards the latter in a figurative if not literal sense.

Ambition is the common thread that unites Robert Angier (Hugh Jackman) and Alfred Borden (Christian Bale). Working as part of a magic act, Alfred, in particular, wishes the magician they work for would think outside the box. Doing the same boring magic tricks night after night becomes terribly tedious for the clever wanna-be magician. His ideas also go unappreciated by those around him causing him to rebel against what he’s supposed to do. Despite the careful and wise counsel given to both men by the stage manager, Cutter (Michael Caine), tragedy soon results from that ambition.

Caught in the middle of this bitter, tangled rivalry, which only grows stronger with time, are the lives of the kind and beautiful Sarah (Rebecca Hall), whom Alfred marries; the famed inventor Nikola Tesla (David Bowie); and magician’s assistant Olivia Wenescombe (Scarlett Johansson), a woman who quickly proves she’s not about to be used as a pawn by any man.

As I sat down to rewatch this film (only my second time since its release), I was filled with anticipation. I remembered quite liking it and the prospect of being swept up into a magical world of a late 1800’s story shrouded in illusionist mystery was full of promise. While I didn’t remember much as the curtain lifted, as it progressed, bits and pieces came floating back. Though I probably found fault some ten years ago, I not only picked up on nuances I likely didn’t before, I also learned to be more critical of a film that could have taken lessons from its sophisticated magic trickery.

Perhaps the greatest downfall of The Prestige is its timelines. The script bounces around from recent past to long ago past, and tries to tie into the present. Keeping track of the three different approaches inspires the viewer to pay very close and careful attention. Looking deeper into this, perhaps there is a method to the madness. Did the writer approach the story like this to keep us engaged and conflicted? Perhaps. Or perhaps not.

Beyond its flaws, which are always the places I like to discover, this film is beautiful. The use of low candle lighting leaves everything in a kind of eerie glow, and its sense of costuming and place is all elegant refinement. The story weaves in and out of complex mystery misdirects which are as curious as they are mesmerizing. The cast performs their respective roles with class and engaging qualities. Jackman and Bale are both excellent actors who are clearly dedicated to their craft, and it shows by the intense performances they turn in. I was surprised that Johannsson is billed next to her male co-stars since she doesn’t show up until halfway through. Still, I enjoyed seeing her in a period role. Though limited, Piper Perabo (Covert Affairs) and Andy Serkis also appear. 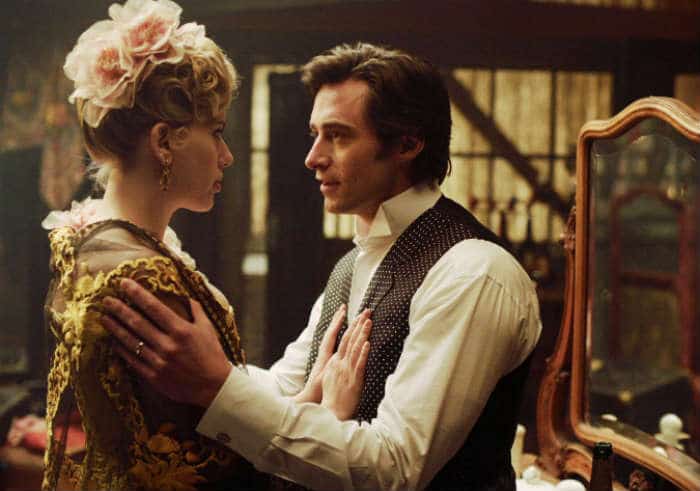 For those who liked The Illusionist (similarities can also be drawn to The Count of Monte Cristo), this might be something worth looking into. It’s less about the romance, but there is a strong thread of romanticism (perhaps mostly because of the “feel” of the drama as opposed to the relationships) running through the entire production. It presents us with a guessing game that although not visually terrifying, is somehow terrifying just the same. The symmetry and unique overtures are equally poignant and heartbreaking. The film keeps its sense of place scattered which keeps an interested viewer curious. Fortunately, for all that, the payoff is that the film arrives full circle giving all of its characters a set ending. Unfortunately, because of a driving need for revenge, not all walk away with a happy ending.

The Prestige is available to rent or buy on Amazon Video. It’s rated PG13.

Have you seen The Prestige? Did you like, dislike, or have conflicted thoughts? Share your thoughts down below. I’d love to read them.

Our romance-themed entertainment site is on a mission to help you find the best period dramas, romance movies, TV shows, and books. Other topics include Jane Austen, Classic Hollywood, TV Couples, Fairy Tales, Romantic Living, Romanticism, and more. We’re damsels not in distress fighting for the all-new optimistic Romantic Revolution. Join us and subscribe. For more information, see our About, Old-Fashioned Romance 101, Modern Romanticism 101, and Romantic Living 101.
Pin this article to read later! And make sure to follow us on Pinterest.
By Rissi JC on March 3rd, 2016