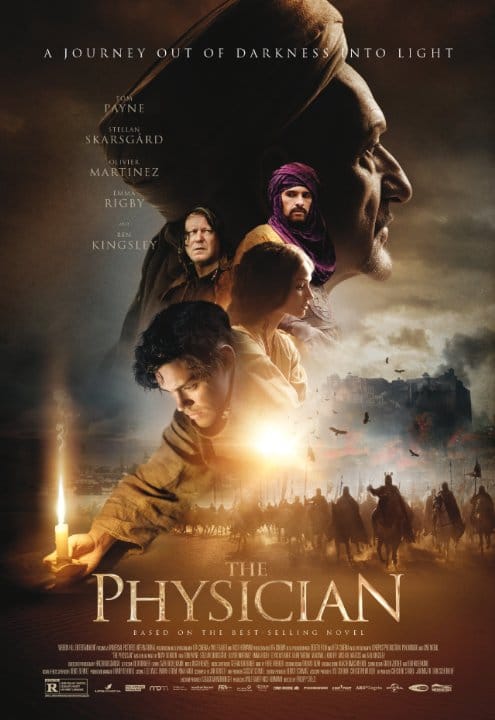 The Physician follows the journey of Rob Cole (Tom Payne) as he sets out to become a  Physician. The movie is based on the novel by Noah Gordon. After watching his mother die of side sickness (appendicitis), he follows a “barber” (Stellan Skarsgaard) all over England. Barbers, in their earliest form, were the doctors of the time period. Their method weren’t so great, but you had to make do with you have. When Rob seeks out the Jewish doctors to heal his master’s eyes, he hears about the famous Ibn Sima. Ibin Sima (Ben Kingsley) is the world’s greatest physician, called an Hakim in the story. Rob desires that he wants to journey to the Middle-east to study under him. There is one big catch: a Christian is not allowed to study at Ibn-Sima’s school. Only Muslims and Jews are allowed.

So, Rob disguises himself as a Jew. He changes his name and even circumcises himself. On his way to the academy, he meets Rebecca (Emma Rigby), and soon the two forge a connection and sparks fly. However, she is on her way to being married to an older Jewish man. The two are separated until he meets her again before her wedding. The two still love each other after Rebecca is married.

The real heart of the story, however, is Rob’s journey to becoming an Hakim. His naturally curious personality serves him well. Rob has a true passion to save people. He even forges a bond with Ibn Sima, though goes through some dark times during his time as an apprentice. He is tested when the Black Plague hits the city along with when he has to operate the Shah (Olivier Martinez). 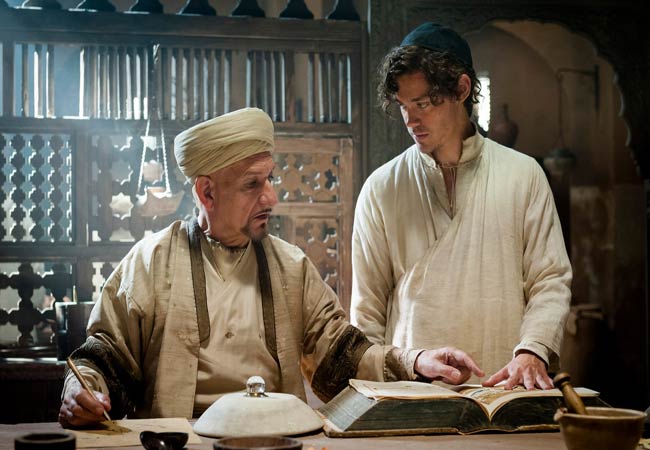 I enjoyed the contrast between England and the Middle-eastern city. The Arabic culture was very advanced medically whereas England and other parts of Europe are far behind. England is portrayed as a dark and dirty place. Ibn Sima’s academy is beautiful and clean. The amount of knowledge contained in his academy is fascinating. Did I mention that Rob has the ability to know when someone is going to die? This plays a big part in the story, too. He learns to accept his power and uses it to help others. His desires to know all about the human body gets him in trouble later.

Overall, the movie is really good. I enjoyed Rob’s trials and tribulations. The romance story took backstage to Rob’s epic journey, and I didn’t feel like we got to know Rebecca’s journey as much as Rob’s. Therefore, I didn’t have too much to say on their romance. It was pretty well done. You can tell the two were deeply connected. This movie is perfect for those who like large-scale period dramas. There is some adult content for those who prefer more wholesome entertainment, but mostly for medical procedure reasons. There’s also some nudity. The movie is on Netflix, so check it out if you have time.

Content Note: Warning! There is some R-rated content in the film! There is a couple of sex scenes and some nudity and violence. There is no profanity.

Our romance-themed entertainment site is on a mission to help you find the best period dramas, romance movies, TV shows, and books. Other topics include Jane Austen, Classic Hollywood, TV Couples, Fairy Tales, Romantic Living, Romanticism, and more. We’re damsels not in distress fighting for the all-new optimistic Romantic Revolution. Join us and subscribe. For more information, see our About, Old-Fashioned Romance 101, Modern Romanticism 101, and Romantic Living 101.
Pin this article to read later! And make sure to follow us on Pinterest.
By Mandi Harris on August 7th, 2015