This week we learned quite a bit more about Aurora. While I’m not as sold on Aurora as a character as much as I’ve been with Tristan, she may still win me over yet. There were some intense moments with her character that kept me intrigued. However, right now, she’s been presented as a love interest for Klaus – similar to that of Valerie for Stefan over on The Vampire Diaries (lover from past returns and was kept away because of someone else’s interference). Personally, I’m still hoping for a backstory with a little more intrigue than past lover – which I’m expecting to be revealed in future episodes!

Now if they explored the levels of her madness (her madness was presented as a little vague), I would be more likely to be on board with her story. How killing her mother in childbirth makes her “mad,” for instance, I do not know. Unless, her family has always led her to believe she is. In fact, why is her brother obsessed with her? Why was she suicidal? I know she wanted to become a vampire – but her decision seemed depressant and even desperate for freedom. I hope we learn more about these motives, rather than her romantic, epic feelings for Klaus that Elijah thwarted.

Elsewhere, Davina lifts the curse, Elijah and Marcel team up to discover some disturbing news, Cami finds herself in trouble and brother turn against brother.

RELATED: The Originals: A Walk On the Wild Side Recap – A Masquerade and an Initiation

KLAUS AND AURORA AND THE STANDOUT ROMANTIC MOMENT 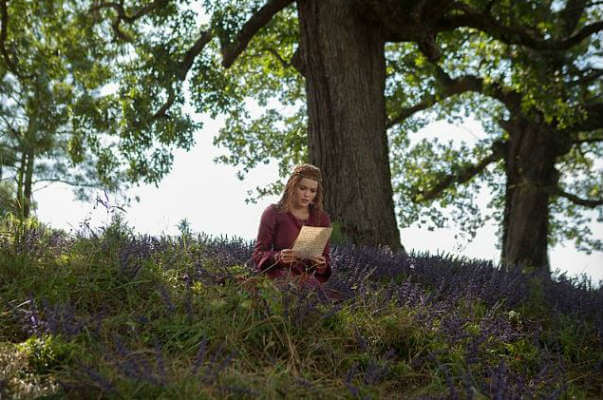 “The Axeman’s Letter” begins with a story – the “love story” of Klaus and Aurora which is then sprinkled throughout the episode. Much of the episode flashes back to the two in the past, their relationship, how she became a vampire and ultimately how they separate.

The beginning of the flashback begins in the past with a letter – which also happens to be the standout romantic moment of the episode. Aurora tells her story to a girl in a shop about Klaus’s beautiful letter to her when she was still human. In the past, she saw him as a vampire, causing her to run from him in fear. So he wrote a beautiful letter explaining what he was and how he feels for her. Aurora describes the letter as the best letter she’s ever received. I won’t go into details, but it was, in fact, a very romantic letter revealing just how desperate Klaus was for love. He, the beast, searching for his Beauty.

He, the beast, searching for his Beauty.

The relationship between Klaus and Aurora deepens after the letter with her pleading to be turned. But Klaus refuses because he doesn’t want to turn her into a monster. So Aurora takes fate into her own hands. She attempts to commit suicide because Tristan has forbidden her to be with Klaus (though I suspect it was actually for much darker and melancholy reasons). Rebekah, compassionate for her friend, gives her some blood which heals her. Aurora, clearly a troubled soul, then jumps “happily” off her balcony to her death in a flight for freedom. She was going to become a vampire no matter what so she could be with Klaus and escape her madness.

In the present day, Aurora makes her poetic entrance with a dead body (the girl from the shop) and a poem. From there, Klaus goes on a scavenger hunt for Aurora and finds a clue that leads him to a French perfume store. Aurora spins him a tale of woe as she reveals the truth about the past and how it was Elijah that separated the two of them forever.

Back in the past, Klaus admits to Aurora that it was not Mikael who killed Esther, but himself. It was his greatest shame, so he hid it from his siblings and blamed her death on their father so they’d all run away with him. However, Elijah compels the truth out of Aurora. And out of revenge he compels her to reject Klaus and tell him he’s a monster she can never love.

For a thousand years, Klaus believed Aurora had never loved him – which helped him turn into the monster he became.

At the end of the episode, Klaus confronts Elijah and the two seem to turn against each other. The two fight with Elijah sick of his brother blaming everyone but himself for his own monstrosities. It seems the prophecy is starting to come true. Perhaps this is their plan all along (Tristan, Aurora and Lucien). Tell them a prophecy and then watch their downfall as they make it happen. It seems the Mikaelson siblings may need to brush up on some Shakespeare.

No doubt, Tristan, Aurora and Lucien are up to more than they’re letting on. If Aurora wanted to plant a wedge between the brothers, then I’d say she’s succeeded. Something tells me Klaus and Aurora won’t end up being “the greatest story ever told.” 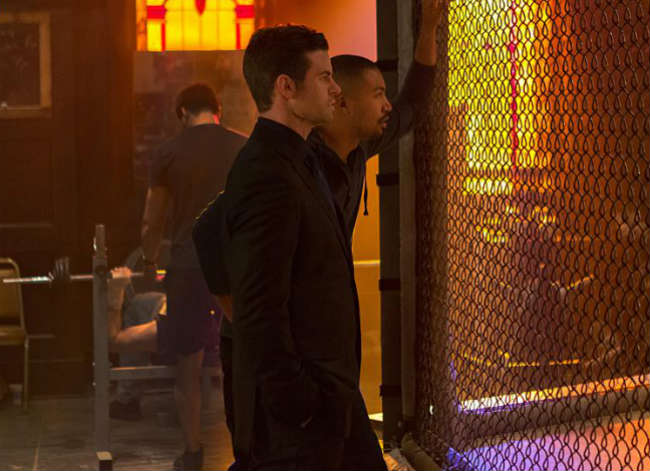 Elijah and Marcel investigate what it is Tristan is up to – only to learn some disturbing news. Tristan enters a building and then uses secret passageways (used in the bootlegging ‘20s) to then go to a storehouse owned by Lucien. Could Tristan and Lucien have been working together this entire time? 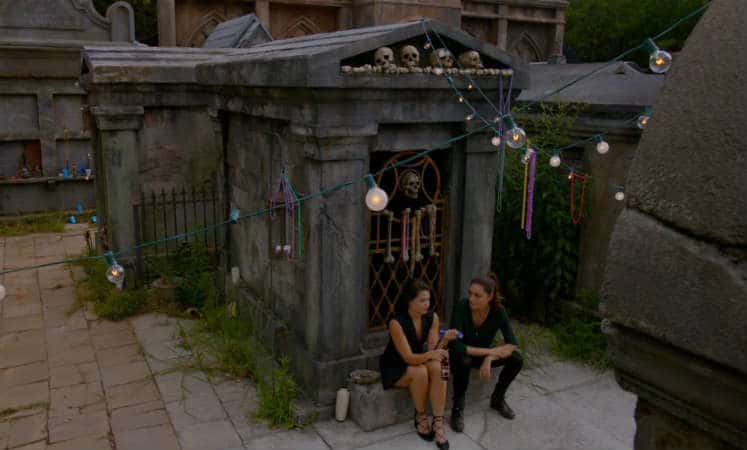 Elsewhere, Hayley and Jackson help Davina with the witches’ festival Fete de Kado. Davina wants the respect of the witches, but is finding it a bit difficult – so she asks Jackson and Hayley to be her guardians in case anyone tries to kill her. The son of the witch she killed does try to get his vengeance (by casting a spell that would make her tell the truth). However, Jackson stops the spell in time.

Meanwhile, Hayley gives Davina some good advice: No one will respect you until you show them who you really are.

By the end of the episode, Davina makes some changes. She asks the ancestors to lift the curse on the crescent wolves, and since this festival is about giving gifts, they lift it. Hayley, Jackson, and all the wolves are freed from the curse. No more candle and no more worrying. Davina would rather be Hayley’s friend than have her as a slave.

She also wants to find a new and more peaceful way to be the leader of the witches.

It was a little bit of an underwhelming way to end the curse, but I’m glad to see the story move forward.

Cami tries to keep an eye on Lucien just in case he’s still the killer. But he catches wind of her antics and grabs her, bringing her to an alley. Instead of killing her, however, he frames her for a murder. Right there, he kills a man and leaves the body just like all the others with Cami left trying to help the victim. But with Cami at the crime scene (and no other fingerprints but her own), Detective Kinney becomes suspicious that she may, in fact, be the serial killer.

Later, back at her Uncle’s apartment, Cami meets with Vincent to discuss the day’s events and shows him all the dark magical objects she inherited from her uncle. Detective Kinney interrupts them with a warrant in hand and arrests her for murder.

Cami: Do you think in a hundred years they’ll be throwing him a party? Smiley face carver blues fest?

Vincent: Well, everybody likes a charismatic killer. You and me know that better than most.

Vincent: You and Klaus; me and my psycho ex-wife.

As far as the Klaus and Aurora romance, I’m definitely not rooting for them to be a “couple,” (and I really hope the series doesn’t go in that direction; I prefer to keep a Byronic’s focus on ONE all-consuming passion – aka Cami) however I’m interested in seeing how this story plays out. What does everyone else think about Klaus and Aurora? Do you like their love story?

What do you think Tristan, Aurora and Lucien are up to? Personally, I still feel like there must be another player – or two. In previous recaps, I talked about the sire lines being turned against each other. However, what if they’re not against each other, not exactly anyway? Certainly Tristan and Aurora seem to be on the same side. If Tristan is pathologically loyal to her, why would he be against her? It’s a little odd. I still believe there’s an outside factor that is working against everyone.

Also, is Lucien, in fact, the actual serial killer? Was that the reveal? Or was this just a random kill to set up Cami? Could there still be a separate killer copying Lucien’s signature?

Well, what did you think of “The Axeman’s Letter?” Let me know in the comments.

Our romance-themed entertainment site is on a mission to help you find the best period dramas, romance movies, TV shows, and books. Other topics include Jane Austen, Classic Hollywood, TV Couples, Fairy Tales, Romantic Living, Romanticism, and more. We’re damsels not in distress fighting for the all-new optimistic Romantic Revolution. Join us and subscribe. For more information, see our About, Old-Fashioned Romance 101, Modern Romanticism 101, and Romantic Living 101.
Pin this article to read later! And make sure to follow us on Pinterest.
By Amber Topping on November 6th, 2015

5 thoughts on “The Originals: The Axeman’s Letter Recap – The Greatest Love Story Ever Told?”