OUT OF THE EASY RECAP 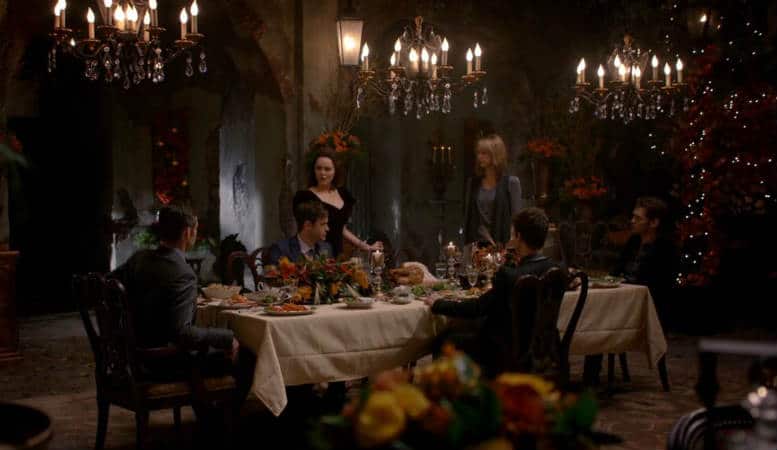 This week’s episode of The Originals, “Out of the Easy,” had plenty of Thanksgiving drama to feast over. Elijah and Klaus have their enemies over for dinner, Hayley and Freya try to rescue Rebekah, Marcel and Vincent come up with a scheme to save Davina from the Strix and Cami remains a prisoner to Lucien. 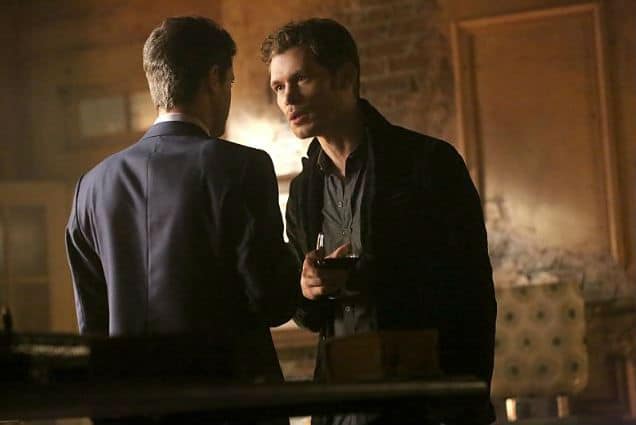 Elijah and Klaus invite Tristan, Lucien and Aurora over for Thanksgiving in an attempt to turn them against each other and then destroy their alliance. All three accept and show up dressed to kill – this is not your typical “family” dinner after all. Elijah quickly reveals to them that they know about their “clandestine alliance” as a trio (much to their surprise) and that they now want to make a stronger alliance with all of them united together to prevent the prophecy. Everyone sits down for a tense Thanksgiving meal to approach the topic of the supposed alliance.

During dinner, the subject of Tristan and Lucien’s plans come up, allowing them to finally reveal what they’ve been up to. Note that the serial killer mystery has been completely solved. Both Lucien and Tristan worked as a team in the murders so as to create a “frightened human populace” because they are easier to control. By making tourism decline that in turn deprives the vampires of blood – which led to Marcel joining the Strix. It’s a clever plan, for sure, making the Strix as a group all the more terrifying and powerful. In a fun aside, apparently the Strix are also responsible for Jack the Ripper and Son of Sam. I hope the writers further explore the Strix and the wars they may be responsible for.

As dinner progresses (with lots of snark and witty asides), Klaus and Elijah continue to question the three for the whereabouts of Rebekah and the medallion. However, it’s when Freya shows up that everything takes a nasty turn – only for Aurora to finally admit that Rebekah’s at the bottom of the ocean. And as Lucien reveals that he took the medallion (that would lock the Mikaelson’s safely away for eternity) and Camille, the tension grows as Klaus’s rage becomes more apparent.

Freya wants to know where her sister is, Elijah and Klaus don’t really want to align with these traitors (they just want their sister back) and Klaus wants Cami safely back. In a violent play, each of the siblings takes a traitor. Freya steals away Aurora, Klaus takes Tristan and Elijah takes Lucien.

Now alone, Lucien pleads that he only made the alliance in an attempt for self-preservation. At this point, it seems he’s probably telling the truth. However, we still don’t know where he got that antidote for the werewolf bite. (Now that I’m actually quite curious about.)

Meanwhile, Tristan tries to convince Klaus to dagger Elijah to keep his siblings put safely away for the year until after the prophecy’s timeline is complete. 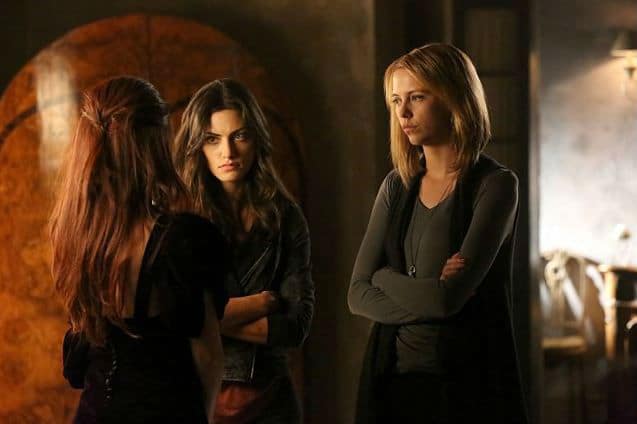 Elsewhere, Hayley and Freya attempt to torture Rebekah’s whereabouts out of Aurora only to discover an unfortunate truth – Aurora doesn’t exactly know where she is. She had her “minions” take Rebekah only for her to kill them as a way to protect the secret. Rebekah’s location was left behind in two envelopes – longitude and latitude. Aurora only has one-half of the answer while her brother Tristan has the other. This gives them leverage and a means to protect themselves.

Still, their plans become futile as everyone re-gathers for dinner. Klaus temporarily kills Tristan, choosing to take his siblings’ side rather than Tristan’s. Klaus warns Aurora that she better bring him Rebekah or Tristan will die – putting their romance to a likely end. Klaus then attacks Lucien saying he wants to know where Cami is.

At the end of the episode, Elijah remembers a part of the prophecy – the events of Thanksgiving were part of it. So the prophecy’s still right on schedule.

Lucien still has Cami under lock and key as he waits for the vervain to drain from her system. So while he goes to Thanksgiving dinner, he leaves her behind with one of his vampires Anton with the instructions to kill her if he doesn’t hear from him that night. Cami makes the best of it as the football watching vampire threatens to torture her if she tries to escape. Cami, however, doesn’t give up and cuts off his hand with the daylight ring and makes a run for it.

Unfortunately, at the same time, Aurora shows up and kidnaps Cami. (Lucien had been bringing up Cami during dinner – which made Aurora both jealous and interested to learn of Klaus’s affections – because now she can have a different leverage to save her brother.)

Hayley’s choice to help the Mikaelson’s save Rebekah has some unforeseen consequences for her relationship with Jackson. She chose to help Rebekah over having Thanksgiving with Jackson and Hope. So Hayley is in the doghouse for now as Jackson makes his way to the Bayou to spend time with his own “family.” Uh-oh. Trouble in paradise for this married couple? 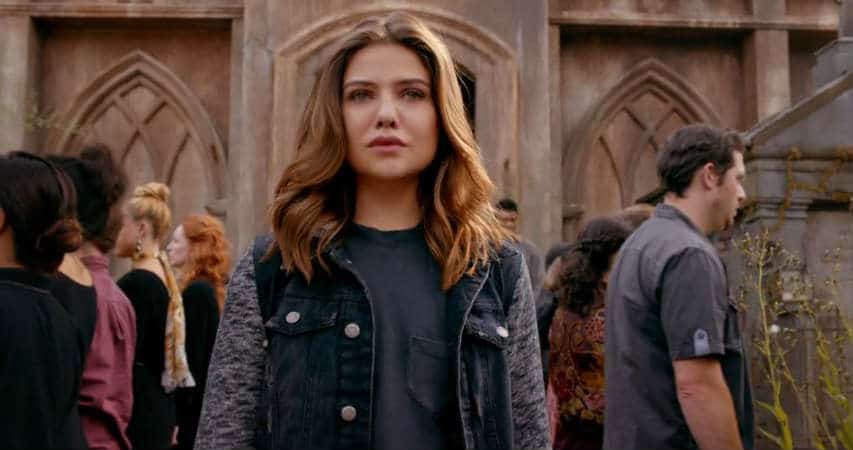 With the knowledge that the Strix are after Davina to perform a spell, Marcel does whatever it takes (under instruction from Elijah) to protect her. Marcel ropes Vincent into the plan. To save her from the Strix, Vincent has Davina shunned by the ancestors and all the witches of New Orleans for murdering her own. In a public scene of disgrace, Davina has to walk down a long line of witches as they turn their backs on her one by one. It will be like Davina was never born to the New Orleans witches. I kind of felt like Davina had this one coming, though, right? Hopefully, this will help mature Davina to become a better leader.

Elijah: It’s Thanksgiving. Let’s invite them for a friendly meal, systematically turn them against one another, and then devastate their pitiful alliance. I can feel the holiday spirit already.

Cami: I appreciate your dead witch’s hand-me-downs and remembering to feed me, but did you really think I was just going to smile and eat up?

Lucien: Well, think of all the poor people who are starving in – well, somewhere. I’d join you, but I’ve been called to dine with the Mikaelsons.

Cami: Are they going to serve your head on a platter?

Cami: Oh, I don’t think you want to hurt me. See, Klaus is the most ruthless vampire in all of history and guess what? He kind of likes me, so maybe you should be the one worrying about whether or not you make it through the night.

Klaus: Lucien. You will take me to Camille, and you will surrender the medallion, or you will meet an end so cruel, the devil will weep. 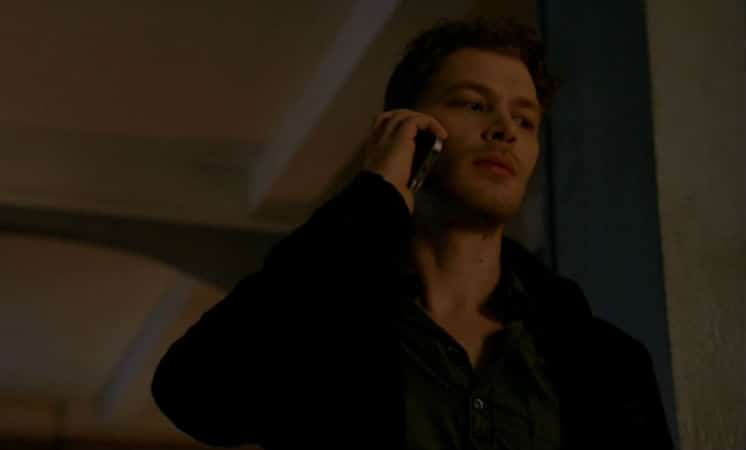 Could there be anything other than Klaus going into a murderous rage over Cami’s disappearance? Lucien realizes his “devastating error” when Klaus flies into a Byronic fit, destroying everything in Lucien’s residence and then killing Lucien’s hired man who guarded Cami (it turns out he should have listened to her advice after all). Klaus tries to call her, asking, “I need to know you’re safe.” If there’s one thing I love, it’s Byronic passion in all its dark, romantic glory.

Who else can’t wait to see Aurora have one of her “episodes?” Something tells me in the near future we’ll be seeing some of Aurora’s “curse” she hinted to Klaus about in vampiric form.

I’m also expecting to see some romantic Klaus/Cami scenes in the next episode. How long before the two admit to each other their feelings?

Well, what did you think of “Out of the Easy?” Let me know in the comments.

Our romance-themed entertainment site is on a mission to help you find the best period dramas, romance movies, TV shows, and books. Other topics include Jane Austen, Classic Hollywood, TV Couples, Fairy Tales, Romantic Living, Romanticism, and more. We’re damsels not in distress fighting for the all-new optimistic Romantic Revolution. Join us and subscribe. For more information, see our About, Old-Fashioned Romance 101, Modern Romanticism 101, and Romantic Living 101.
Pin this article to read later! And make sure to follow us on Pinterest.
By Amber Topping on November 20th, 2015

6 thoughts on “The Originals: Out of the Easy Recap – An Originals’ Thanksgiving”