This week on The Originals in “Heart Shaped Box,” Aurora was out for Mikaelson blood when she kidnaps Freya and uses her as bait, Davina unlocks the secret to breaking the sire bond and Cami and Hayley do some good, old-fashioned vampire training at the church. It was a fun episode with a few new twists that will be exciting to watch play out.

THE MAD WOMAN IN THE FOREST 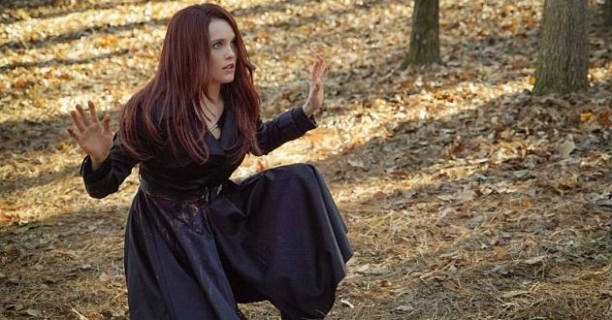 Tensions are high between the Mikaelson siblings in “Heart Shaped Box” – specifically Freya and Klaus – with Aurora on the loose with the white oak weapons and the prophecy looming ever closer. And after thousands of attempts, Freya has still not been able to find Aurora with a locator spell, much to Klaus’s annoyance. Still, she tries again. Unfortunately, Aurora makes an appearance and kidnaps Freya to be bait for the Mikaelson brothers instead.

Aurora leaves behind a riddle that brings them to the forest, only for Klaus to go on a wild goose chase looking for a dying Freya (who has been shot). He saves her just in time.

Elsewhere, Aurora makes her (insane) plan known to Elijah. She wanted to lure them out and then shoot Elijah with a white oak wooden bullet while Klaus watched (while also putting her brother Tristan out of his misery). Thankfully, her plan fails…for now. Klaus hesitates when he has the chance to kill her and she gets away. But not before she shoots Elijah, just barely missing his heart. Klaus saves his brother instead of defeating Aurora. That will have to be for another day.

In a sweet moment, Klaus tells Freya back at the Compound that she is a part of the family now, always and forever.

A DEAL WITH THE DEVIL

Davina is still intent on resurrecting Kol, but the Strix have a catch. They will let her resurrect him if she finishes the spell that will break the sire link. For now, Aya gives Davina the ability to temporarily bring back Kol while a magical candle burns because Kol knows how to finish the spell Davina never finished.

Kol tries to warn Davina about the spell. But Davina can’t see past her desire to bring him back. Unfortunately, she should have listened to him. To break the sire line bond, they need the blood of an un-sired vampire – in other words, Hayley. 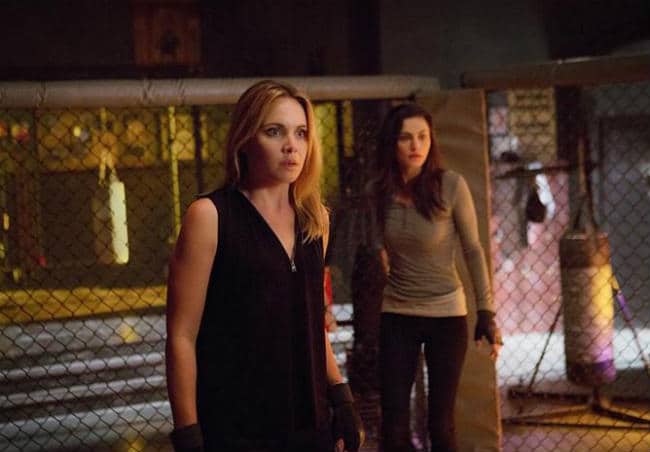 It’s all about girl power this week in “Heart Shaped Box” as Hayley gives Cami a much-needed vampire training session – not to mention some fantastic advice. It’s refreshing to see the Cami we know and love shining through. She’s angry, for sure. But angry at her situation as well as herself more than anything else.

The training has a rough start, but Cami and Hayley work well together as a team. And just as Cami seems to be improving, the coven working for the Strix show up to kill Hayley. Cami uses one of her dark weapons but it only puts a temporary stop to one of the witches. The witches are intent on killing Hayley no matter what.

Thankfully, Kol is able to use magic (through Davina and the candle) to stop the coven before they kill Hayley. With powerful magic, he temporarily knocks them unconscious. But Aya is desperate to be de-linked. So she goes after Hayley herself. But it’s Marcel who comes to the rescue this time.

There is another solution to the spell, another ingredient. Jackson’s heart instead of Hayley’s. They can use his heart to break the sire bond because when Hayley and Jackson were married, their heart became one.

Still, Klaus and Elijah decide it’s much safer for everyone if they keep all the vampires linked to them. But they decide they should get Jackson’s heart to be on the safe side. Unfortunately, when they dig his heart up, they discover someone else had already stolen it.

Apparently, Marcel beat them to it. He gives the heart to Aya, once again proving to her that he’s a leader and that he wants to be freed from the Mikaelson’s.

At the very end of “Heart Shaped Box,” Aurora and Aya join forces to defeat the Mikaelson family. With these two working together, it can only mean one thing: trouble! 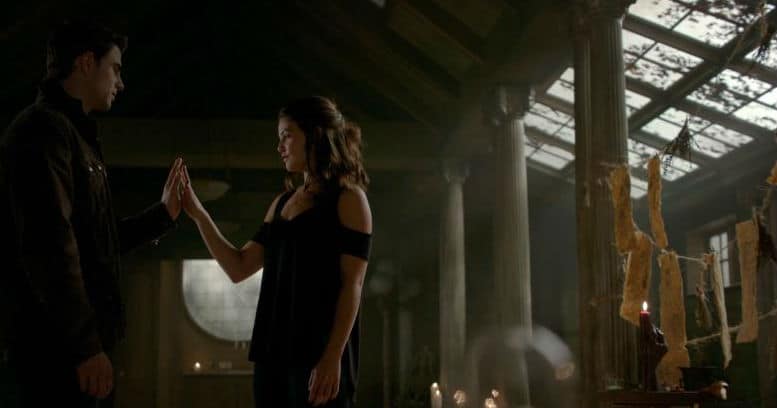 There were quite a few sweet moments between Kol and Davina this week in “Heart Shaped Box!” There’s something about the two of them together that just works. Davina’s stories (in my opinion anyway) are always at their strongest when Kol is in the picture.

That all said, the romantic moment in question is when the two star-crossed lovebirds say their good-byes. Davina wakes up from the magic Kol used to knock the coven out temporarily, with the candle about to burn out. He pleads with her to let him go, telling her that Aya never keeps her promises. But still, she won’t. Instead, she tells him she loves him. Clearly in love with her as well, he says:

“In that case, you best kiss me before I go.”

Davina kisses him only for the flame to burn out with Kol sadly disappearing.

Klaus: “A forest of pine. And a box made so fine. Come quickly. If not, then poor Freya shall rot, buried in dirt for all time.” The woman is insane.

Elijah: Does she have to punish us with the world’s most unfortunate limerick?

Cami: Come on, Hayley, everyone knows a baby vamp is borderline useless. Even Josh could wipe the floors with me.

Elijah: You think, somehow, I’m responsible for your little breakup. How adorably delusional of you, Aurora. You do realize that you’re utterly insane? Niklaus can be resilient, but there’s only so much madness even he can take. I suppose, eventually, he was able to distinguish between real love and some…petty desire. Once he’d discarded you, the veil was lifted and all that remained was something quite pathetic.

Kol: It’s not the sexiest way to spend our final moments together, but you can make it up to me. Night on the town in a little black dress…Definitely our worst date ever.

Klaus: Tend to Freya. I have to murder my ex. 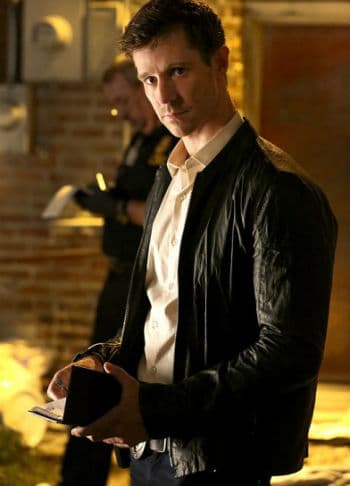 I can’t help but feel as I watch that all of the characters are pawns in a much larger chess game. But who is the bigger player? Who’s shuffling the pieces? Where does the prophecy actually come from? Aya and Aurora seem merely to be playing the parts they were meant to play, rather than doing the actual directing. Plus, there have been little scenes here and there that don’t quite make sense. Holes in the story, if you will. I believe these aren’t holes at all, however. Rather I believe they are little clues placed throughout the season to lead us to the answer – or the big reveal.

My mind keeps returning to Detective Will Kinney (mostly because I really hope the writers have something bigger in store for him). Besides being criminally underused as a character (you have Jason Dohring, for goodness sake, USE him), all of his scenes are rather convenient. He enters the story the same time as the prophecy, he knows more than he’s letting on with Cami’s family, he’s there when Lucien takes the weapons, he just happens to be about to kill himself when Cami and Klaus show up.

I know this is a crazy theory but what if he was faking? What if it was all a performance? Could he be pretending to be compelled? Is there more to him than meets the eye? Again, I reiterate – this is Jason Dohring. If they have him, why wouldn’t they use him? That is unless they’re actually planning to.

Of course, there’s also Lucien who has been missing for a while. It would be interesting to connect his story to some kind of Revolution against the “royal” originals. Then there’s Aya – who always seems to be plotting. And even Marcel who’s so duplicitous, who knows where he stands! Can we completely trust Freya? The pendant with Finn did disappear under her watch. We also can’t rule out a new player either. I still think it would be awesome if Dahlia herself created her own version of vampires and there is another set of “Originals.” Now, that would be a vampire war! The writers did make a point of saying that Esther was an artist and had her own way of doing spells. Who’s to say another powerful witch (like Dahlia) couldn’t create their own version of vampires with their own distinct artistry? Still, I do feel like there does need to be a bigger player in this whole charade. I kind of feel like they’ve passed the Macbeth-like story of making the prophecy happen on their own.

But these are just my rambling thoughts and speculation about what “might” happen. So, we shall see!

On a side note, did anyone else watch The Vampire Diaries? How do you think the two episodes will link in the crossover event? Was Caroline on her way to see Klaus? Or someone else? It looks like we might be getting a permanent three-year jump for both shows which would bring both stories into the present day. Very interesting to say the least. Because if that’s the case then a three-year flash forward in the story could mean quite a lot of changes for The Originals.

Well, what did you think of “Heart Shaped Box?” Who do you think the actual big bad is? Or are all the characters bringing the prophecy on themselves? Let me know in the comments.

Our romance-themed entertainment site is on a mission to help you find the best period dramas, romance movies, TV shows, and books. Other topics include Jane Austen, Classic Hollywood, TV Couples, Fairy Tales, Romantic Living, Romanticism, and more. We’re damsels not in distress fighting for the all-new optimistic Romantic Revolution. Join us and subscribe. For more information, see our About, Old-Fashioned Romance 101, Modern Romanticism 101, and Romantic Living 101.
Pin this article to read later! And make sure to follow us on Pinterest.
By Amber Topping on February 20th, 2016

2 thoughts on “The Originals: Heart Shaped Box Recap – A Tragic Twist for Hayley”