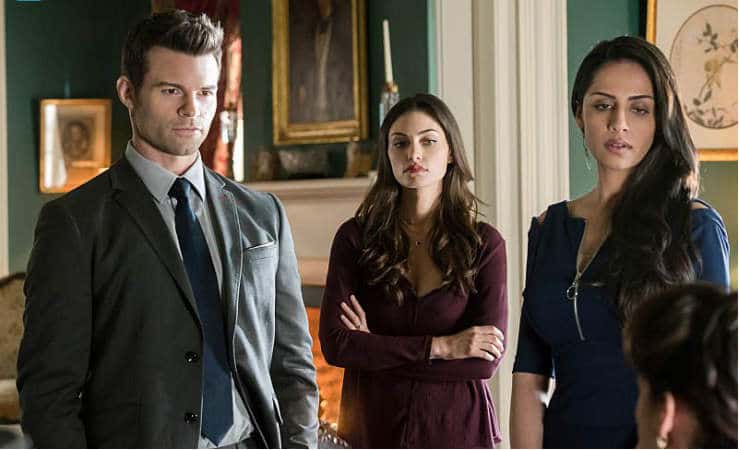 This week on The Originals in “Exquisite Corpse,” the writers toyed with the idea of romantic monsters struggling with the demon within in a very literal fashion. This idea of a monster longing to be human has never been more prevalent in the original vampires than with Rebekah Mikaelson –she is just a girl asking many boys to love her after all. But because of her vampirism she constantly struggles with that pesty monster inside. And with the story of Eva Sinclair, the writers were able to tackle that literary concept literally, while still highlighting its double meaning. Eva is in fact an actual demon inside of Rebekah trying to win, trying to kill Rebekah’s innocent self.  This concept of light and dark played a key role in the theme of this week’s episode. But would the lightness still in Rebekah win out the dark demon inside her?

RELATED: The Originals: Save My Soul Recap – The Maiden in the Tower 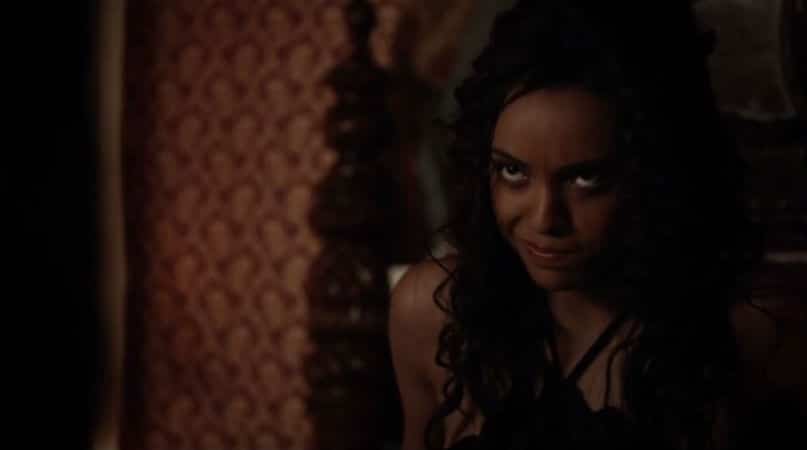 “All of us live with a demon inside.”

Soon, we see Eva Sinclair chasing a young, blond Rebekah through a dark room representing their shared mind. This time around, Eva wins out and awakens. She temporarily kills Marcel, while then taking the opportunity to try and steal Baby Hope. Thankfully, Hayley and Klaus are able to stop her before she succeeds. But the beginning narration is rather foreboding. (Sorry Elijah/Gia fans, the V.O. seemed to purposely land on them during the opening montage hinting that their relationship is lustful and perhaps weak).

With Eva almost in full control of her body again, Marcel turns to Vincent for help in destroying his ex-wife so Rebekah can live. At first Vincent refuses, but ultimately agrees because he wants her to pay for what she did to the children.

By Vincent’s guidance, they’re able to easily track Eva. Unfortunately for Marcel, Vincent and Eva seem to reconnect when she reveals that she never actually killed the children.

Eva takes Vincent to kidnap the witch Josephine (the replacement for not getting Hope) and then brings him to the children, where they sleep in a deep slumber. Disturbed, Vincent reveals his true intention: to trick Eva. He knocks her out and calls Marcel to tell him their location.

With the help of Freya using a powerful spell, Marcel and Vincent enter Eva and Rebekah’s mind to kill Eva with a magical dagger. But there’s a catch. If they die inside her mind (this including Rebekah as well), they will be lost forever and die.

And just as Vincent’s about to lose the battle against Eva (ending with a kiss), young Rebekah stabs her. In a way, the demon is killed, but her own demon lives on because the innocent version of Rebekah had to be a killer to eliminate her. Davina and the other witches wake up, freed from the dark spell.

With Rebekah back in control permanently, she decides to stay in her body. Plus, she still wants to use magic to bring back Kol. 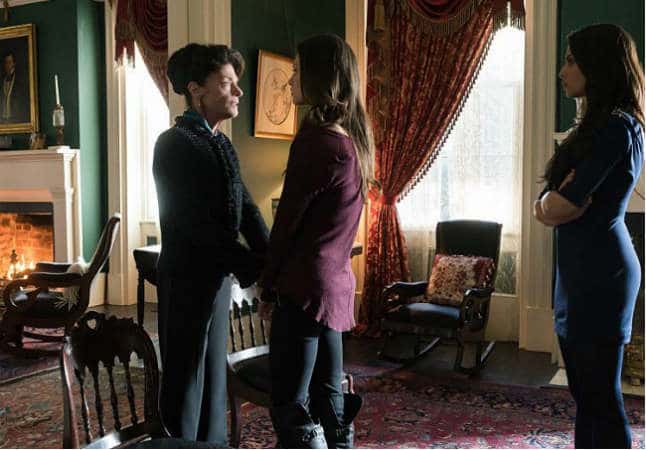 Earlier in the episode, Hayley, Elijah and Gia (the three working together very awkwardly), turn to Josephine for help to save Rebekah, but she refuses, arguing that collateral damage is necessary to stop the dangerous Eva Sinclair.

Josephine then tells them that Eva plans to become the most powerful witch in New Orleans by getting the blood and power of children from 9 different covens, which would then make her even more powerful than the Harvest Girls.

Upset she won’t help, Elijah tries to leave in a huff claiming he wants to end their alliance, only to be rebuked by Josephine by saying that he needs the witches more than they need him.

She then grabs Hayley’s arm and makes a strange prophecy about Hayley’s future being filled with demons and darkness. With Dahlia coming, this prediction isn’t particularly promising for Hayley’s continued happiness. 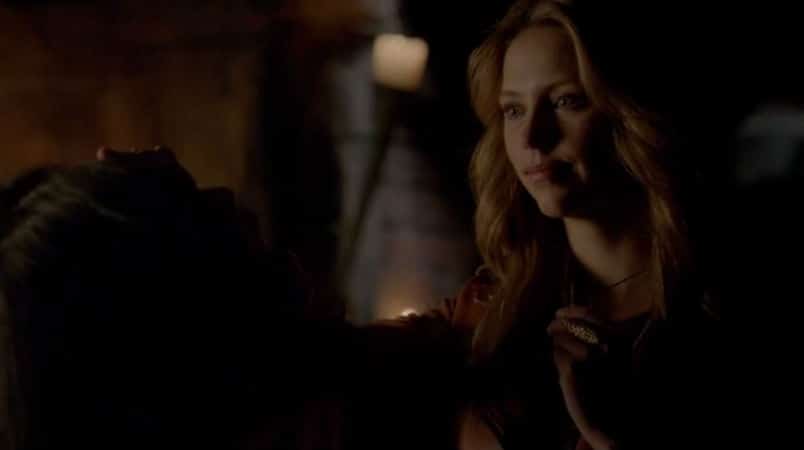 Klaus brings Freya in chains to meet their mother in the hope that Esther will be able to share a spell with her to save Rebekah. He then uses compulsion to make Esther tell the truth. She argues that Freya, a young girl once filled with light, now has no light left. And that any spell she does will come with a price. For the spell to work, Freya would need to use Klaus as an anchor, which would open his mind to her.

As crazy as Esther is, Esther is in fact right. Klaus takes his mother’s side and decides not to trust Freya. He can’t risk her having all his secrets which she could easily give to Dahlia. But then Elijah shows up, desperate to still save Rebekah and says he’ll be the anchor instead.

With Klaus still refusing to participate in the plan, Freya breaks free from her chains (obviously she was never actually bound by them) and temporarily kills Klaus as she escapes with Elijah.

The two cast the spell putting Vincent and Marcel inside her mind. And just as the spell begins to fade, Klaus shows up to create a powerful circle of three, temporarily putting aside his mistrust. He too becomes an anchor, willing to risk giving away his secrets to save his sister. It’s clear to see how far Klaus has come! The spell works, killing Eva and leaving Rebekah inside her body.

Later, Klaus and Freya meet at the bar. She reveals quite a bit about what she saw when she peered inside his mind. She learned how loneliness plagues his very existence and he fears being left alone. Because of what she sees, she realizes she will never be able to get him to trust her. He’s too paranoid. So she blatantly tells Klaus that she’s going to turn everyone against him.

She then makes her way to the tomb, where she extinguishes Esther into a pile of dead crows. She was going to get her vengeance against her mother for giving her away no matter what.

It seems there isn’t much light in Freya after all. 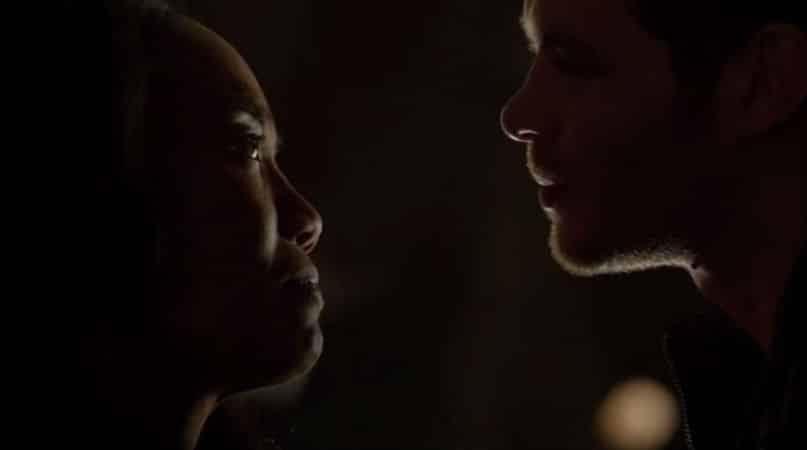 Klaus: We would have burned bright for a while, and then burned out. You see you think of turning us as your greatest sin. But the truth is, it’s the one of your many faults I’ve come to forgive. I prefer us as we are.

(Klaus and Esther having an honest exchange, while also hinting toward Freya’s own lack of light.)

Do you think the dead crows mean Esther is permanently dead? Or do you think she will once again be resurrected? She does seem pretty hard to actually kill.

Do you believe there’s any light left in Freya? Or is she as dark as Esther claims?

How do you think Freya will begin to turn everyone against Klaus? She knows his darkest secrets, which means she has a lot of ammunition to use against his loved ones.

It’s been a while since Cami was front and center as a character. I think it’s time she return! The human element has been lacking as of late. And her scenes with Klaus are always refreshing.

How good was Maisie Richardson-Sellers in this episode? Watch out Tatiana Maslany!!!

Well, what did you think of “Exquisite Corpse?” Let me know in the comments!

Stay tuned for when I recap next week’s episode “Night Has a Thousand Eyes.”

Our romance-themed entertainment site is on a mission to help you find the best period dramas, romance movies, TV shows, and books. Other topics include Jane Austen, Classic Hollywood, TV Couples, Fairy Tales, Romantic Living, Romanticism, and more. We’re damsels not in distress fighting for the all-new optimistic Romantic Revolution. Join us and subscribe. For more information, see our About, Old-Fashioned Romance 101, Modern Romanticism 101, and Romantic Living 101.
Pin this article to read later! And make sure to follow us on Pinterest.
By Amber Topping on April 7th, 2015