BEHIND THE BLACK HORIZON RECAP AND REVIEW 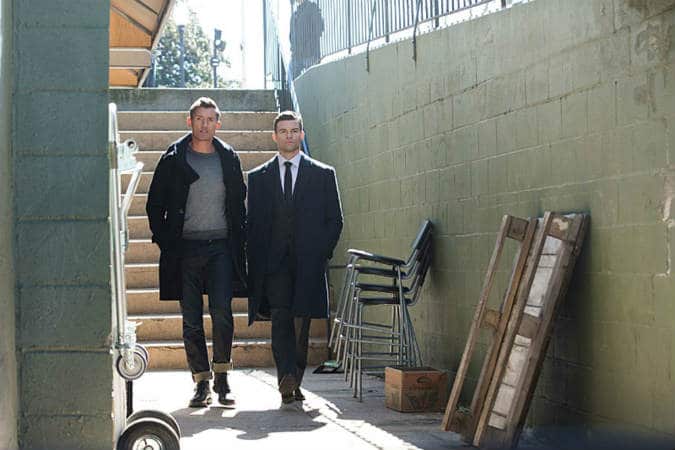 This week on The Originals in “Behind the Black Horizon,” much was revealed and, unfortunately, Finn was taken once again far too soon. It seems Cami’s initial instincts about Lucien (from all the way back at the beginning of the season) turned out to be correct.  And then she was right once again about Aurora. Maybe everyone should just listen to Cami and call it a day. I thought this was one of the best episodes of the season and promises to bring the series to an exciting new direction.

RELATED: The Originals: Alone With Everybody Recap – The Last White Oak Bullet 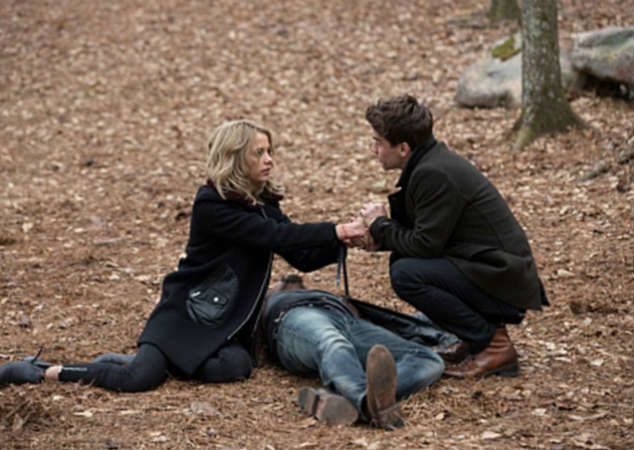 Lucien kidnaps Freya for the specific purpose of getting her blood. He doesn’t need her for a spell. That’s what Vincent is for. It turns out Vincent has no choice in the matter because if he doesn’t help Lucien, the ancestors will kill him. So he helps Lucien but defiantly lets him and the ancestors know he’s upset about it. And even tries to fight against their control a few times. But the ancestors want Lucien to succeed. For what purpose, we don’t yet know. But I’m really starting to believe the ancestors might be the ones who are actually behind the prophecy.

Lucien brings Freya and Vincent to Mystic Falls to the very place of the original spell. He has reverse engineered Esther’s spell so Vincent can use it to upgrade him to a new type of vampire – one even more powerful than the originals.

So while Lucien didn’t manufacture the prophecy, he did find a way to benefit from it. He made a deal with the Ancestors who continue to help him. Apparently, he had been waiting a thousand years to defeat the Mikaelsons and become a new type of vampire. He hates and wants to destroy them more than anything. Beyond that, he’s clearly a psychotic evil vampire who wants more power.

KLAUS AND HAYLEY UNCOVER THE TRUTH

Meanwhile in “Behind the Black Horizon,” Klaus and Hayley track down Lucien’s various “Kingmaker Land Development” buildings searching for clues. Eventually, they find one of his companies heavily guarded. The two tear the place apart. Below ground they find various werewolves barely alive. They discover Lucien has been experimenting on werewolves from the seven bloodlines so he can create a lethal strand that will kill even an original. 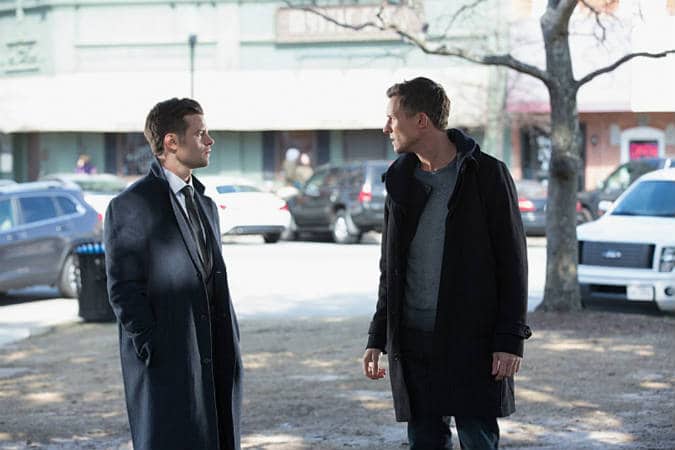 With the help of Finn, Elijah heads to Mystic Falls in search of Freya. There, they cross paths with Matt Donovan (so a mini Vampire Diaries crossover) who wants them to leave his vampire free town. However, even Matt can’t argue with Elijah’s persuasive point of view. The two find a peaceful happy medium as Matt helps them track down Lucien. The enemy of my enemy is my friend and all.

They find Lucien too late. Vincent was able to successfully create the serum which Lucien has now drank. However, they don’t yet know this. Lucien threatens to kill Freya holding her hostage so they can’t get to him. Finn takes Matt’s wooden bullet gun and shoots Freya which goes through to Lucien killing him.

Elijah runs to Freya and heals her with his blood. It’s then she reveals what has happened. Lucien has not actually been defeated because he drank the serum. Lucien comes back to life, re-born as a new type of vampire. One clearly more powerful than the Originals. He tosses Elijah and Matt like it’s nothing. Finn gives up a good fight but is bitten by Lucien’s poisonous bite.

Freya throws up a protective barrier spell so Lucien can’t get through. He leaves for now and takes with him the second serum. But who is it for? Himself or someone else? 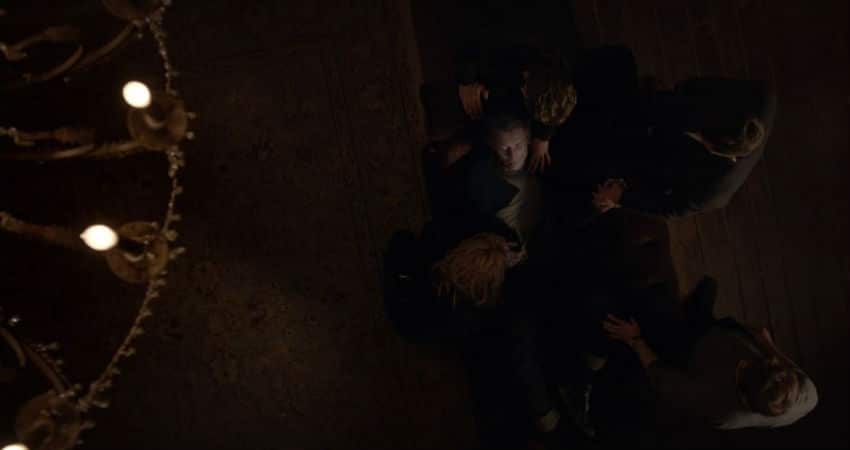 They bring Finn back to New Orleans waiting for the poisonous bite to pass through his system. Klaus returns to heal his brother who he has once again begun to feel love and affection for. However, Klaus’s blood doesn’t heal him. Lucien’s bite is a new type of terror that can kill an original and Finn dies a tragic death with his siblings (especially Freya) crying over him.

While it seems a little anti-climactic to once again kill a character who has died a few times before, at least, this time around he was given proper characterization and layered development before his unfortunate death. For the first time, I really felt like I knew Finn and understood his motivations. His siblings had driven him to madness and “utter loneliness” by locking him away in a box for 900 years. His emotional narrative of what he suffered shed much-needed light on his motivations. While Elijah had his own red room of madness created to avoid his own sins, Finn’s was thrust upon him by circumstance and not by choice. All this time he just didn’t want to feel alone.

In the end, Finn is finally able to connect to his siblings and the idea of “always and forever.” He isn’t alone when he dies which is a comfort to his anxious mind. It’s a shame Rebekah couldn’t have been there so we could see all five siblings together because this felt like the first final death for an original. And even though it felt too soon to kill Finn, the emotion of his death felt genuine. Now, he’s likely in the abyss (or hell) with the likes of Katherine (from The Vampire Diaries) and probably will never return.

I loved that at the very end when each of them said their goodbyes it represented each of their personalities. Elijah with love and forgiveness; Kol with a continued hatred; Freya with sisterly affection; and Klaus with vengeance.

TROUBLE IN PARADISE AND AN UNSETTLING TRUTH 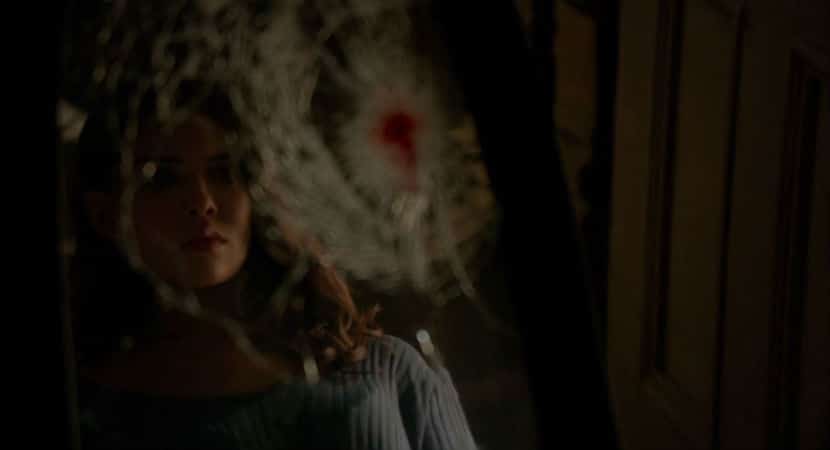 With the help of Cami’s advice, in “Behind the Black Horizon,” Davina begins to piece together the possibility Kol has not returned the same. His temper is out of control and he doesn’t seem like himself. So, Davina decides to test his blood. By doing so, she uncovers an unsettling truth. His blood is infused with magic. The ancestors messed with the spell that brought him back, and similar to Cami’s uncle, he’s cursed. In what way, however, remains to be seen. Could he be the beast from the prophecy?

At the end, Davina and Vincent meet at the bar where there’s no magic. He claims with passion and verve that the ancestors need to be stopped and it will be up to the two of them to do it!

While Aurora wasn’t actually in the episode, Lucien breaks her out and we can assume gives her the other half of the serum so they can be unstoppable, evil vampires together. Let’s hope Cami has something in her dark objects to defeat her, otherwise, Cami’s in real trouble. 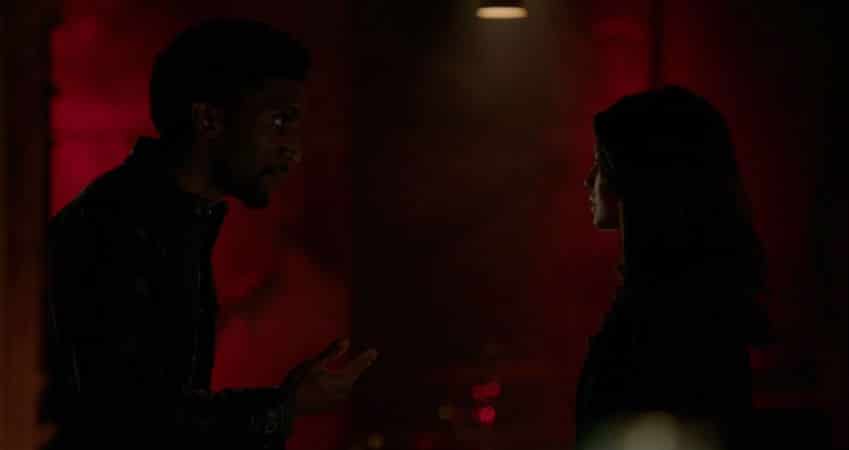 There has been a lot of speculation of possible upcoming deaths. We’ve already seen Finn die. So, who’s next? Surely, by the end of the season, one or two more characters are going to die. How do you feel about this? I’m hoping they don’t kill characters off for the sake of killing characters. It would be unfortunate to lose series regulars. Now if Lucien and Aurora die, I’m okay with that! If Cami or Davina die, on the other hand, I’d be less okay with it. We don’t want a repeat of Cami’s death and we need female characters to stick around. I also think we should keep Kol and up him to series regular.

Since the spell included white oak, is that why the lethal werewolf venom from the seven bloodlines actually killed Finn? That’s what I had assumed. But then they didn’t bring this up in the discussion as Finn died. Anyone else find that strange?

Considering the fact that Lucien is merely a psychotic opportunist, are we to assume then that there could still be another player which may lead us into season 4? It just seems too random for Lucien to find out about the prophecy. I think the real big bad is the ancestors. It would make perfect sense.

I still feel like it would be possible for another powerful witch to have created her/his own unique strand of vampires. Not based off Esther’s spell like Lucien has done but something entirely new.

With each episode, I become a bigger and bigger fan of the character of Vincent and the actor who plays him, Yusuf Gatewood. I look forward to watching Vincent take on the ancestors. His righteous anger is something beautiful to watch.

Well, what did you think of “Behind the Black Horizon?” Let me know in the comments.

Our romance-themed entertainment site is on a mission to help you find the best period dramas, romance movies, TV shows, and books. Other topics include Jane Austen, Classic Hollywood, TV Couples, Fairy Tales, Romantic Living, Romanticism, and more. We’re damsels not in distress fighting for the all-new optimistic Romantic Revolution. Join us and subscribe. For more information, see our About, Old-Fashioned Romance 101, Modern Romanticism 101, and Romantic Living 101.
Pin this article to read later! And make sure to follow us on Pinterest.
By Amber Topping on April 9th, 2016