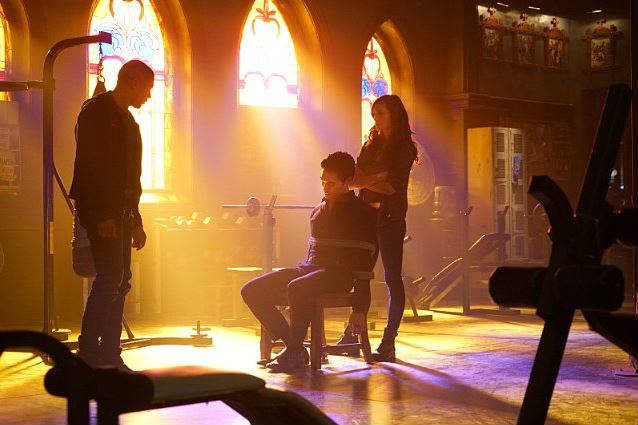 A lot went down in this week’s episode, “Beautiful Mistake,” of The Originals with a clever script (and many memorable quotes) that revealed a few shocking surprises. Rebekah (played by both actresses) returns, Klaus tries to uncover Aurora’s loyalties, Hayley and Marcel run into some trouble and Lucien kidnaps Cami and Detective Kinney.

RELATED: The Originals: The Axeman’s Letter Recap – The Greatest Love Story Ever Told?

In a surprising turn of events, Maisie Richardson-Sellers returned as Rebekah only to be killed by Aya in the beginning moments of the episode. It seems poor Rebekah has lost her human body and, therefore, the chance to live a normal life. So no more Maisie – which is actually a bit sad since she was brilliant.

Rebekah (once again played by Claire Holt) awakens from the coffin, now returned to her original form. From there, Aya, with other members of the Strix, work to defeat Rebekah. Thankfully, Freya (through a magical projection) is able to help Rebekah temporarily fight them off.

Elijah and Freya plead to Rebekah to convince her to return home immediately, but instead she stubbornly stays behind to chase down the spell to bring back Kol. Unfortunately, the spell was a trap set up a long time ago by Aya (though we learn the spell does still actually exist) and the Strix as a means to defeat her. This time, however, Freya is unable to help save her. Rebekah is tragically staked (don’t worry, though, she’s still alive) and taken by the Strix. 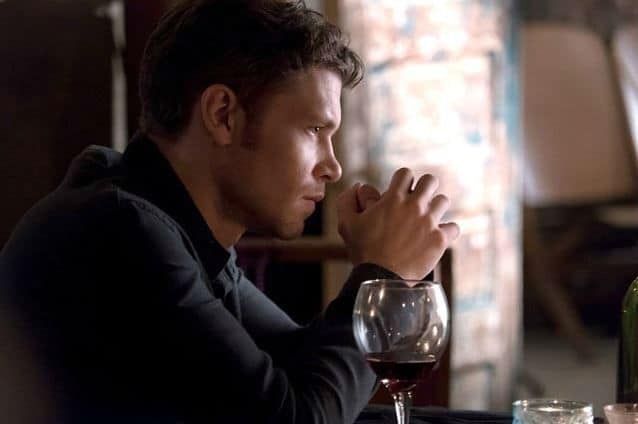 In the aftermath of last week’s epic fight, Freya finds Klaus and Elijah sharing a drink together. They reveal that despite their fight, they’ve aligned for the time being to defeat Lucien and Tristan.

First on the menu of their plan is to find out where Aurora’s loyalties lie: with her brother and Lucien or with Klaus.

To find her out, Klaus takes Aurora on the town, out to lunch (in his vampiric way) and shows her a romantic surprise – a tomb of artwork of Aurora made a couple hundred years earlier by him. Aurora, seemingly moved by this romantic gesture from the past, kisses Klaus.

Klaus continues to question her throughout the day, but it isn’t until after Rebekah has been staked that she begins to reveal the actual truth (or at least what she claims to be the truth). Tristan and Lucien are working together to use a magical device that will lock the Mikaelson siblings away together – where no one can hurt them – so by extension also protecting themselves. And at the same time – the three get their vengeance. But why would they want vengeance?

Apparently, right after Tristan, Aurora and Lucien had been turned, Elijah had compelled them to literally believe they were Elijah, Rebekah, and Klaus on the run from their father. In other words, they were compelled to be decoys. Mikael spent a hundred years hunting them as they were implanted with false memories and false identities. When they woke up from the compulsion, they had to painfully shed their skins and identities and re-discover who they were. I’d say this is a pretty good motive for vengeance on their part.

However, Aurora still claims to be on Klaus’s side – even though she didn’t warn him about Rebekah ahead of time (leaving Klaus quite angry). Aurora reveals she had a different plan than Tristan and Lucien. Two vampires from her sire line (or Rebekah’s) killed two of the Strix, stealing away Rebekah’s body and bringing her home on Aurora’s terms rather than her brother’s and Lucien’s.

Somehow, I think we’re going to find that Aurora is still up to much more than she’s letting on. She’s proven she can be quite a manipulative liar. Also, I am definitely not rooting for Klaus and Aurora to be a couple.

HAYLEY, MARCEL AND THE STRIX 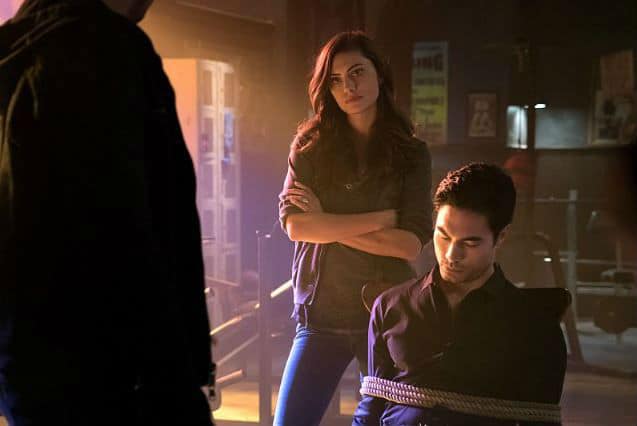 Hayley finds herself being tailed by a member of The Strix, so she temporarily takes him down by biting him with her hybrid venom. With the help of Marcel, she ties him up so they can question him. But when Marcel tells Elijah what has happened, he warns Marcel to kill him immediately as he is incredibly dangerous – a torture consultant who worked with Genghis Khan before he became a vampire. Shen Min (also known as the Red Sorrow) is not someone to mess with.

Unfortunately, Marcel doesn’t take his advice. Shen Min breaks free from his chains and is about to simultaneously kill Marcel and Hayley, when Elijah shows up in the nick of time to stake him (without actually killing him). Elijah questions him using compulsion. They learn that Shen Min was commanded to take Hayley out so they could get to Davina, who Tristan needed to wield a magical device. But before he is compelled to tell them why, Shen Min kills himself.

A NEAR DEADLY COMPULSION 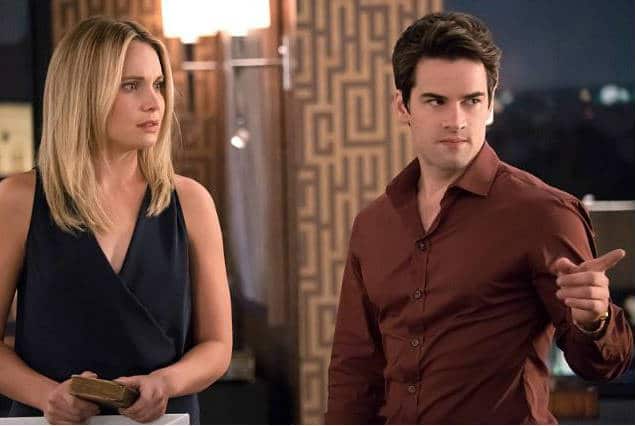 After Cami is arrested by Detective Kinney, Lucien shows up and kidnaps the two of them. He brings them back to his place for his “evil” plan. Lucien compels Detective Kinney to do whatever he asks as a way to control her. Lucien has gathered all of Cami’s dark objects and wants her to find a specific one he needs (the magical object they need to defeat the Mikaelson’s). If she doesn’t, then he’ll have Detective Kinney kill himself. Lucien even has Kinney cut himself – leaving him to nearly bleed out. This is the most the writers have used Jason Dohring so far, so it was a nice treat. No one pulls off snarky dialogue quite like he does! There’s also some nice character development between Cami and Detective Kinney (though later he’s compelled to forget).

Eventually, Lucien’s plan works. Before he has Detective Kinney slit his own throat, he forces Cami to give him the object.

In the end, Lucien compels Detective Kinney to believe the serial killings are still unsolved. He also compels him to never be able to solve it and to see himself as a failure. Poor Detective Kinney.

Cami: You’ve been compelled to do everything he says. It’s like hypnosis. Vampires use it against humans to do their bidding.

Elijah: Marcellus, next time I ask you to take out the trash – try not to dally.

Cami: How are you holding up?

Detective Kinney: Well, I’m gushing blood into a bucket because the vampire who kidnapped us doesn’t want to stain his floor, so pretty great.

While not “exactly” romantic, I do always love a good rescue! And when Elijah rescued Hayley (and by extension Marcel) from being killed, he was in top form. Suave, confident and there to protect the woman he loves. Elijah equals the most masculine, swoon-worthy vampire since Mick St. John.

I admit I’m a little disappointed the serial killer mystery has been resolved so quickly. I was hoping for a bigger, less obvious twist. However, Lucien and Tristan working together to defeat the Mikaelson siblings does make for some entertaining television. That said, I’m still hoping there’s an outside force causing them to align in the first place. They can still get their vengeance while also protecting themselves from the actual prophecy, which I believe to actually be real and not a ploy to trick them. And if so, then we still have a larger mystery on our hands!

Well, what did you think of “Beautiful Mistake?” Let me know in the comments.

Our romance-themed entertainment site is on a mission to help you find the best period dramas, romance movies, TV shows, and books. Other topics include Jane Austen, Classic Hollywood, TV Couples, Fairy Tales, Romantic Living, Romanticism, and more. We’re damsels not in distress fighting for the all-new optimistic Romantic Revolution. Join us and subscribe. For more information, see our About, Old-Fashioned Romance 101, Modern Romanticism 101, and Romantic Living 101.
Pin this article to read later! And make sure to follow us on Pinterest.
By Amber Topping on November 13th, 2015

4 thoughts on “The Originals: Beautiful Mistake Recap – A Surprise Return and Goodbye”