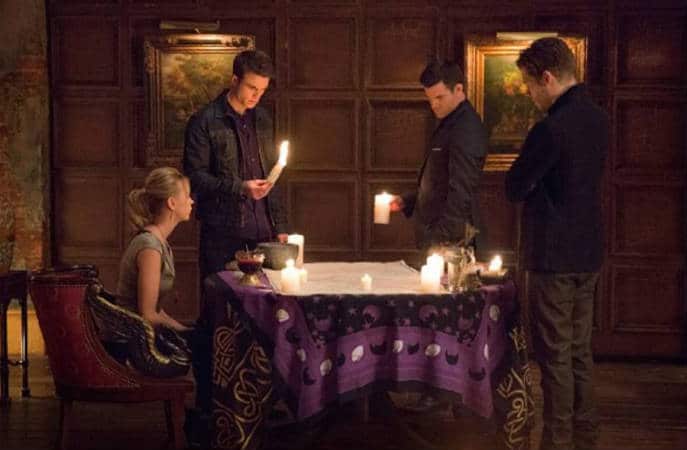 This week on The Originals in “An Old Friend Calls,” Klaus’s history comes back to haunt him when a vampire returns for vengeance. Meanwhile, Kol settles back into vampire life and his relationship with Davina, Klaus and Cami hit a bump in their relationship, and Elijah discovers the Strix have been mysteriously disappearing.

RELATED The Originals: A Streetcar Named Desire Recap – The End of a War 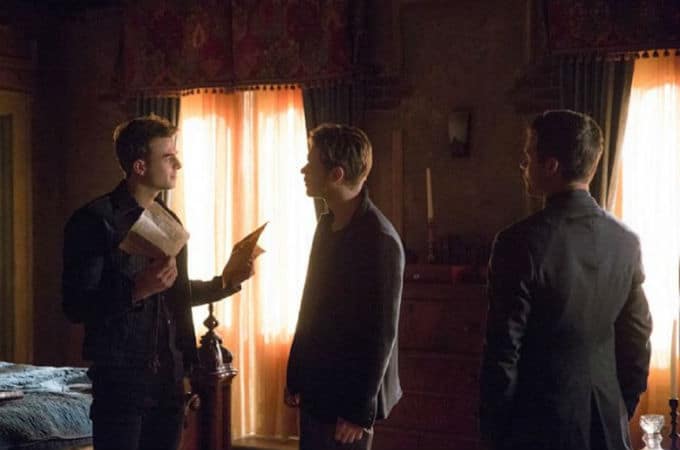 With all the vampires de-sired from Klaus, he’s become paranoid about enemies from his past coming back to get him. Turns out his paranoia is justified. Cortez, an old vampire enemy of Klaus returns with the intent of seeking retribution. He’s hunting for the last piece of white oak to kill Klaus. While Klaus turns to the recently resurrected Kol for help in locating Cortez, Cortez turns to Vincent for help by forcing his hand. If Vincent refuses, he’ll kill innocent humans. So Vincent turns to the ancestors to seek out the white oak in an attempt to save people.

Soon after, Cami shows up at Rousseau’s where Vincent is, only to get caught up in the mess. Thankfully, before she’s knocked out by Cortez, she’s able to send a text to Klaus.

He comes in time to save most of the humans and kills Cortez. But not before learning that there’s a whole online network of his enemies keeping in touch with each other. Before Cortez died, he sent a message to the group saying that white oak exists. 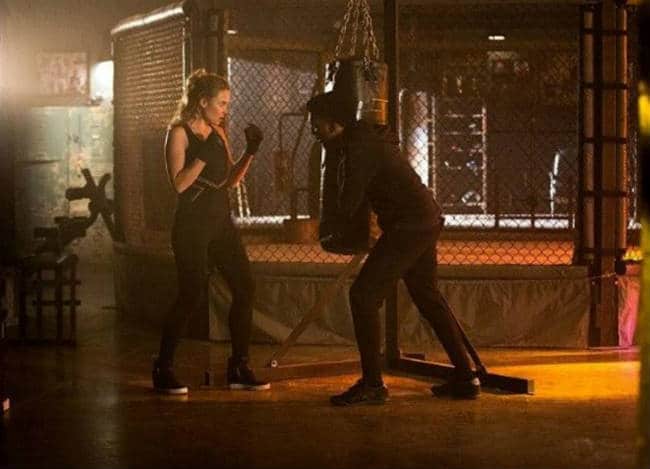 Earlier in “An Old Friend Calls,” we learn that Cami’s upset with Klaus because he didn’t kill Aurora. She’s worried that eventually Aurora will break free and come for her. Vincent also points out (quite astutely) that perhaps she’s also worried about another reason for Klaus keeping Aurora alive. Could Klaus still have feelings for Aurora?

It seems Cami and Klaus have hit a bump in the road in their relationship, what with her being turned into a vampire by his ex. And then Klaus not killing said ex when he had the chance. And then when Klaus kills one of her friends (in the name of protecting himself and his family) she becomes angry even though she “gets it.” Can Cami as a vampire work with Klaus? Or was it her humanity that loved him?

Klaus later professes that his feelings for Cami have not grown cold as Aurora might have wished. And as he’s about to kiss her, she pulls away. She says that her feelings have changed and that she no longer loves him.

She admits (in what seems to be an obvious lie – but crushes Klaus) that the part of her that hoped for his redemption died with her humanity.

By the end of “An Old Friend Calls,” we do, in fact, learn that she lied to Klaus about her feelings. She just doesn’t want to have to worry whether or not Klaus loves her or Aurora. Plus, she has to protect herself.

IN THE NAME OF LOVE

Meanwhile, The Strix have gone missing, so Marcel (under the direction of Elijah) begins to hunt for the culprit behind their disappearances. Marcel turns to Davina – through Josh – for help only to discover that Hayley has been the one killing the Strix off one by one (all Arrow like as she crosses names off a list) as vengeance for what they did to Jackson.

Elijah confronts Hayley who feels like she’s doing right by Jackson. Elijah, however, is worried that she’s going to start a war with the Strix and end up dead. But Hayley’s insistent.

So, Elijah, as a means to protect Hayley, kills a bunch of the Strix and frames Cortez for all the killings. Oh, what Elijah will do for love.

At the end of “An Old Friend Calls,” Klaus and Hayley decide to leave town together with Hope, likely leading to the three-year time jump mentioned in The Vampire Diaries last week. That same night, Vincent finds the last piece of white oak. Uh-oh.

Elsewhere, Kol loses control. Even his love for Davina can’t suppress his appetite for blood. And then out of the shadows appears…Finn. He’s alive and well. (How?) Could Finn be the Big Bad? Could he be working with Freya? Someone else? We shall see. 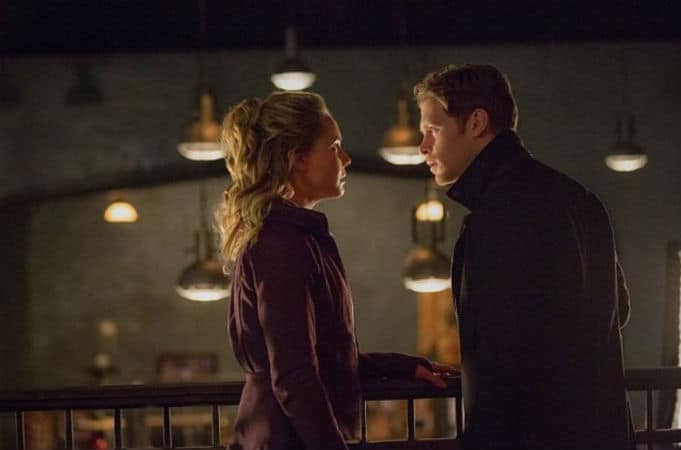 There were three standout moments this week in “An Old Friend Calls.” All were for the three main couples of The Originals.

First up, was a poignant scene between Cami and Klaus. Klaus admits his feelings for her are strong as ever, and just as they are about to kiss, Cami pulls away. She lies about her own feelings to push him away. All because she’s unsure of his feelings for Aurora and the fact that she needs to feel safe. Looks like the writers decided to throw in a little conflict to gives these two more time to build. And…I’m okay with that. Just don’t drag it out too long.

Second on the list, was a lovely scene between Davina and Kol. She’s worried about his vampirism but Kol claims that it wasn’t the magic that made him better, she did. They kiss and sleep together after a year of being apart. And while he can’t actually control his hunger for blood now that he’s a vampire, his love for Davina appears genuine. No doubt his murderous behavior (not that Davina’s saintly) could cause a rift in the future.

And then there was the genuine moment shared between Hayley and Elijah. She admits to Elijah that she loves him and has always loved him. But that she feels guilty because he reminds her of Jackson – and how he knew she loved Elijah but stayed with her anyway. So she needs to let Elijah go. Elijah tells her that he tried to let her go before but it didn’t work out. Obviously, it’s not going to work out too well for Hayley either.

All three scenes started strong and ended on low notes. Cami pushes Klaus away to protect herself (and heart), Kol gives into his darker nature, and Hayley lets Elijah go. Suffice it to say, there looks to be an uphill battle for these three couples.

But there is hope! I like to look to listen to the “wise” words of Logan Echolls from Veronica Mars (played by Jason Dohring in The Originals – who should be getting WAY more screen time because of his awesomeness).

Logan (to Veronica): I thought our story was epic, you know, you and me.

Logan: Spanning years and continents. Lives ruined, bloodshed. Epic. But summer’s almost here and we won’t see each other at all. And then you leave town, and then it’s over.

Veronica: …Come on. Ruined lives? Bloodshed? You really think a relationship should be that hard?

Logan: No one writes songs about the ones that come easy.

And that is exactly what I think will happen with these couples. I do believe they are all end game, whether they end tragically or not. It just won’t come easy.

Kol: In hindsight, could have been nicer to people, or, at least, left fewer survivors.

I know I sound like a broken record, but I just feel like there needs to be something tying this whole season together. In other words, I’m still looking for the Big Bad. I have a few suspects but need more evidence! Could it be Finn? Freya? Lucien? Will? Someone else? We shall see. I will be disappointed if there turns out not to be one!

Well, what did you think of “An Old Friend Calls?” Let me know in the comments.

Our romance-themed entertainment site is on a mission to help you find the best period dramas, romance movies, TV shows, and books. Other topics include Jane Austen, Classic Hollywood, TV Couples, Fairy Tales, Romantic Living, Romanticism, and more. We’re damsels not in distress fighting for the all-new optimistic Romantic Revolution. Join us and subscribe. For more information, see our About, Old-Fashioned Romance 101, Modern Romanticism 101, and Romantic Living 101.
Pin this article to read later! And make sure to follow us on Pinterest.
By Amber Topping on March 5th, 2016