THE ORIGINALS – ALONE WITH EVERYBODY RECAP 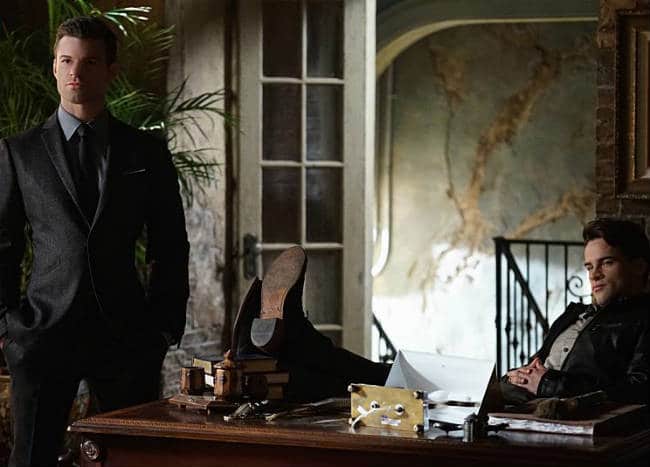 This week on The Originals in “Alone With Everybody,” the prophecy returned in full force when Sofya, a mysterious and very powerful vampire shows up in town. It was a brilliant episode with a few fantastic reveals that have been a long time coming. No doubt there will be a lot more to come as the rest of the season plays out.

RELATED The Originals: I Will See You in Hell or New Orleans Recap – The War’s Heating Up (Plus New Impossible ‘Moonlight’ Theory Included) 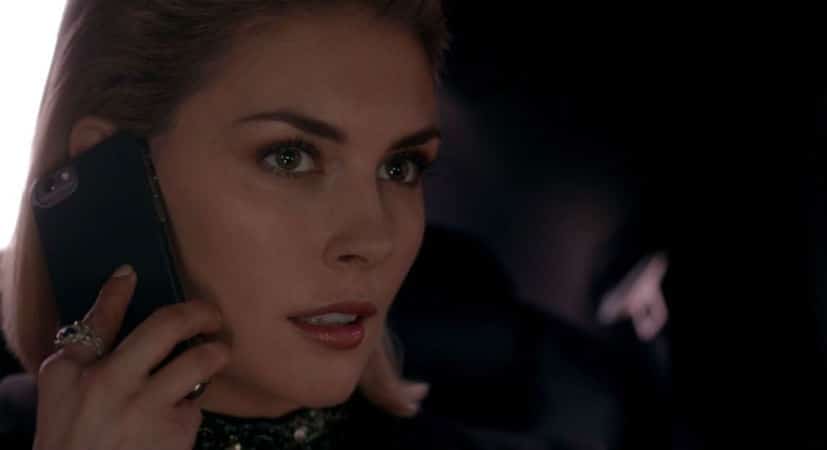 Sofya, the new vamp in town, makes her grand – and very memorable – entrance when she steals the white oak from Vincent. Somehow, she’s immune to his power which leaves Vincent both stunned and intrigued.

Not long after, Josh discovers that the white oak bullet has been put for sale on the black market and is up for grabs to the highest bidder. Marcel, Josh, Elijah and Vincent then team up to track down Sofya and get the white oak back before it falls into the wrong hands.

Their plan goes a little too smoothly, however. They capture Sofya without so much as a fight (which is especially surprising considering her earlier all-powerful persona). Vincent and Josh attempt to question her while Elijah decides what to do with the white oak now that he finally has it back in his possession. 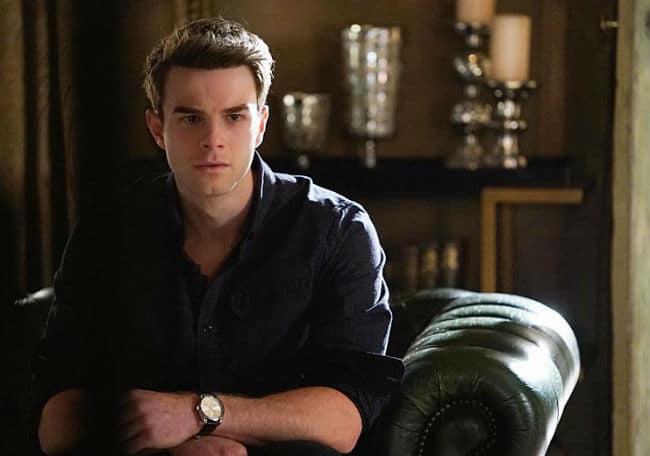 Elsewhere in “Alone With Everybody,” Kol’s rage continues to build as he adjusts back to life as a vampire. He is out of control and is worried he’ll end up accidentally killing Davina. And with Finn back, Kol is out for vengeance. He wants nothing more than to incinerate the brother who killed him.

So when Finn shows up at the Compound to talk to his siblings, Kol becomes enraged, especially when he learns that Finn wants to be put back into a witch’s body. Davina, who will do anything for Kol, then finds a spell and uses it on Finn. She makes sure that he will be stuck in his vampire body forever. Sad for Finn, but awesome for the audience who finally get to enjoy the original actor as the character in a new way and in a whole new dynamic. 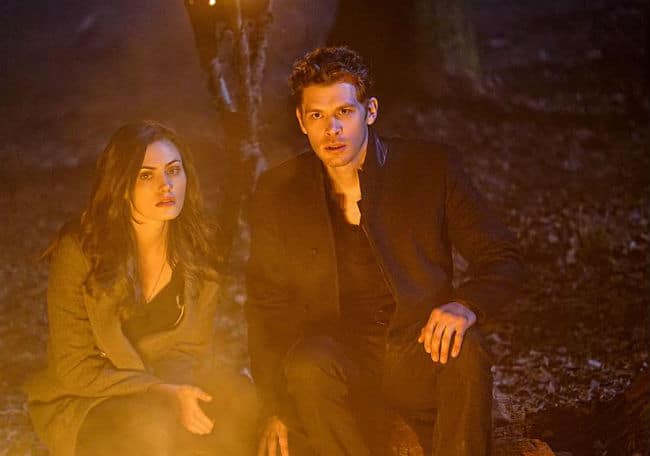 Meanwhile, Klaus and Hayley go on a road trip in “Alone with Everybody” to hide from his enemies while the white oak is missing. Hayley takes him to her old stomping grounds where she became a werewolf. There, they stumble upon another young girl who triggered the werewolf curse. It turns out she was a little girl Hayley used to babysit and is now a teenager.

Klaus and Hayley butt heads at first over whether or not to help this girl. But the two make progress in their relationship and begin to reconcile so they can be better parents for Hope. Klaus decides to join Hayley to help this girl.

While in the woods, however, Klaus makes an unsettling discovery – the wolves of this particular pack are being hunted…by Kingmaker Development (the company connected to Lucien). 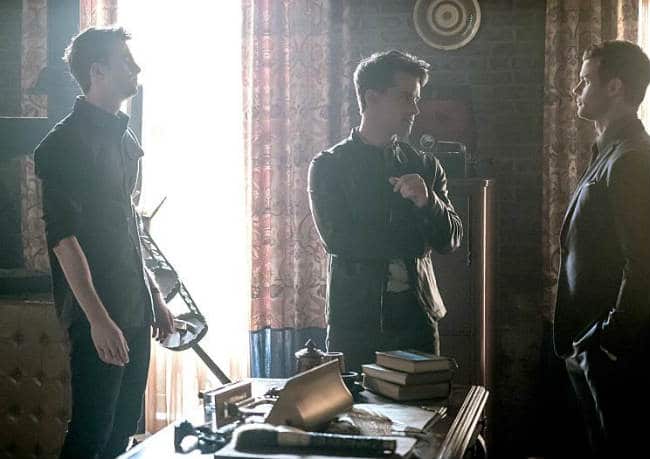 Elijah (after much persuasion from Freya, Finn, and Lucien) decides not to destroy the white oak bullet. Instead, he hands it over to Freya to hide and protect with powerful magic.

Around the same time, Vincent receives a vision from the ancestors which persuades him to change allegiance. He joins Sofya (who reveals that she wanted to be captured and that her boss let them have the white oak) and snaps Josh’s neck. Uh-oh. I also feel this may put a little bit of a damper in the Vincent/Cami friendship in future episodes.

At the very end, Vincent finds Freya and uses magic to knock her out so she can be taken away. The big reveal? Lucien was behind the white oak bidding and has kidnapped Freya. The bidding war was all a ruse so he could get both the white oak and Freya.

FAVORITE QUOTE FROM “ALONE WITH EVERYBODY”

I love, love, love that “Alone with Everybody” brought the story back to Lucien and Kingmaker Development. I have been wondering about his mysterious substance that healed werewolf bites and his video that sounded like modern day French Revolution propaganda. Now whether or not Lucien will turn out to be the ultimate big bad with all the brains remains to be seen. Or if he was simply recruited by someone more powerful. Do we know for sure that Lucien is Sofya’s boss? Or could this be a misdirect? One thing we do now know is that he is somehow involved. But why do the ancestors want Vincent to help Lucien? And why is Vincent worried as if for his (and everyone else’s) souls? I still don’t want to completely toss the Will theory completely out simply because I’m hoping for more Jason Dohring…

That also brings Sofya into question. Who is she? Why is she unaffected by Vincent’s very powerful magic? Were the ancestors protecting her from his magic? Or something else? I find her to be a truly fascinating character and hope she sticks around until the end of the season. I love her sleek look and persona that seems influenced by other vampire shows like Kindred: The Embraced or Moonlight.

Next week, the preview shows Lucien wanting to return to the “original” spell that created vampires in the first place. Hence, why he kidnapped Freya. I wondered if the writers would ever address this, so I’m thrilled to see this as a plot point. That said, I’d like to see it go even a step further. If Esther created a unique line of vampirism who’s to say that another witch couldn’t have created a whole other line of vampires in the past separate from the Originals without them knowing? Dahlia definitely could have. Plus, I still don’t know if we can completely trust Freya or Finn for that matter. That whole sequence (and performance) was a bit elaborate with Finn not wanting to remain a monster. Why did Freya want to keep the white oak? Simply to have the option of allowing one of them to die by choice? Or something more? I wouldn’t completely rule out Freya and Finn being up to no good, that’s for sure!

Well, what did you think of “Alone With Everybody?” Let me know in the comments.

Our romance-themed entertainment site is on a mission to help you find the best period dramas, romance movies, TV shows, and books. Other topics include Jane Austen, Classic Hollywood, TV Couples, Fairy Tales, Romantic Living, Romanticism, and more. We’re damsels not in distress fighting for the all-new optimistic Romantic Revolution. Join us and subscribe. For more information, see our About, Old-Fashioned Romance 101, Modern Romanticism 101, and Romantic Living 101.
Pin this article to read later! And make sure to follow us on Pinterest.
By Amber Topping on April 2nd, 2016