“A WALK ON THE WILD SIDE” RECAP

While Lucien and Aurora have proved to be entertaining thus far, it’s Oliver Ackland as Tristan who has stolen my attention. A new Byronic has entered the building – think more Heathcliff than Rochester – and I hope he’s here to stay.

RELATED: The Originals: I Will See You in Hell Or New Orleans Recap – The War’s Heating Up, Plus New Impossible Moonlight Theory Included

Marcel receives a fancy invitation to a masquerade – a gala put together by the Strix. They want him to be their latest recruit. He accepts the invitation only to discover there are strings attached when he shows up at the exclusive party (the most elite in history).

He quickly learns that the party is actually an initiation – his initiation. To be accepted, Marcel has to prove his detective skills as well as his strength and integrity. Marcel’s daylight ring is stolen when he arrives at the party. Tristan announces he has until dawn to figure out who stole it and then kill the person who took it as his initiation into the Strix. His only other choice is death. If he survives the night, he will be the first of Klaus’s line to be invited into the group. They believe Marcel can help them end the war and unite the sire lines.

Still, Marcel’s turned off by the Strix’s lack of loyalty to their own members. This isn’t the group he had in mind – so the party becomes a fight for survival. Marcel ultimately discovers that Aya (who he also shared a passionate kiss with) took his ring and gave it to Mohinder, her trainer.

Mohinder and Marcel fight to the death. Mohinder is clearly the stronger fighter and is about to win when Marcel pulls his trick out of his sleeve. With Hayley also at the gala, she bit Marcel earlier and gave him some of her werewolf blood to assist in the fight. So when Mohinder bites into him he too is poisoned. With Mohinder dying from poison, Marcel takes the upper hand. Still, he refuses to do the dirty work for the Strix – who clearly want Mohinder dead.

However, this (proving his integrity) was the final test and he passed. He’s welcomed into the group with Marcel left completely unsure about their actual intentions.

Marcel later goes to see Klaus so he can be healed with his blood. Marcel also works to convince Klaus that he’s on his side – that he has no choice but to be on his side. With that, Klaus believes him for now and gives him his blood.

Also important to note, Marcel and Aya continue to grow closer. Is she actually interested in him? Or is she using him for the Strix’s gain? Perhaps both? We shall see. 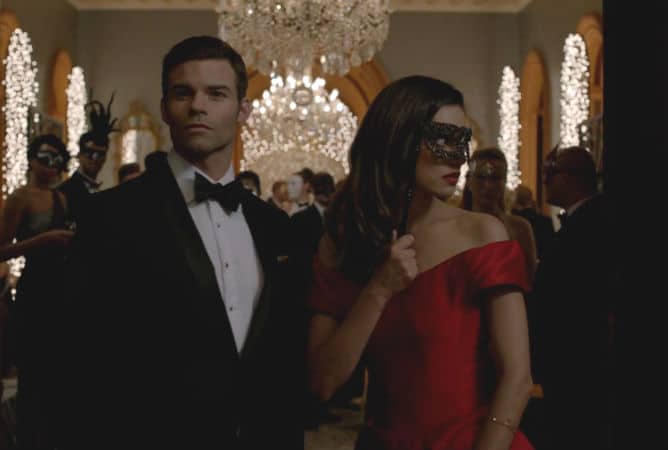 Elijah and Hayley grow closer in this week’s episode as they attend the gala together. After Elijah fills her in on the prophecy, she decides to go as his “date” to the party to learn more about the Strix. There, Tristan takes a liking to her. However, Hayley isn’t quite sure what to think about Elijah’s pompous line of vampires. Still, being there proves to be of help to Marcel when she gives him her blood to help him win the fight.

In the end, Elijah and Hayley have an intimate conversation across balconies – a nice star-crossed nod as they discuss Hope and family. She doesn’t know how she’s going to explain this complicated family to Hope, but she knows how she’ll start…with “always and forever.” 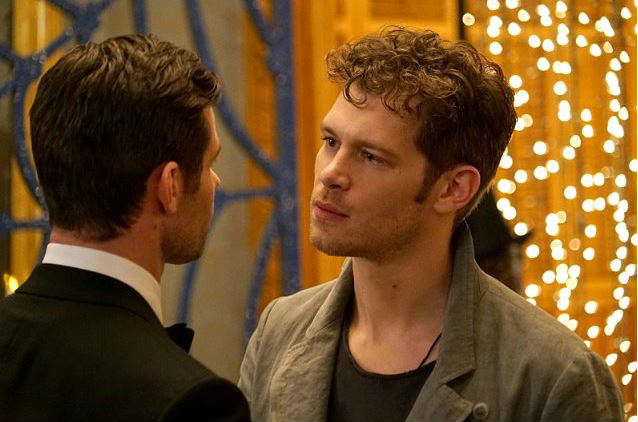 With Alexis, Lucien’s seer, missing, Klaus and Lucien form a temporary alliance to find her. With Freya’s help, they find her located at Tristan’s estate. Klaus and Lucien put on a drunken show, crashing the Gatsby-like party as a distraction while Freya searches for Alexis.

Freya finds her only to discover that Alexis seems to be there of her own free will. Alexis gives Freya a little gift (in the form of a kiss) by showing Freya her doomed end to this story: being buried alive. Alexis also reveals that she knows how they all will die and has left Lucien because she knows how the story ends. But she’s not telling just yet.

Alexis fights off Freya with magic because she doesn’t want to go with her, only to be knocked out with a good old-fashioned punch from Freya who proudly claims to be a Mikaelson. 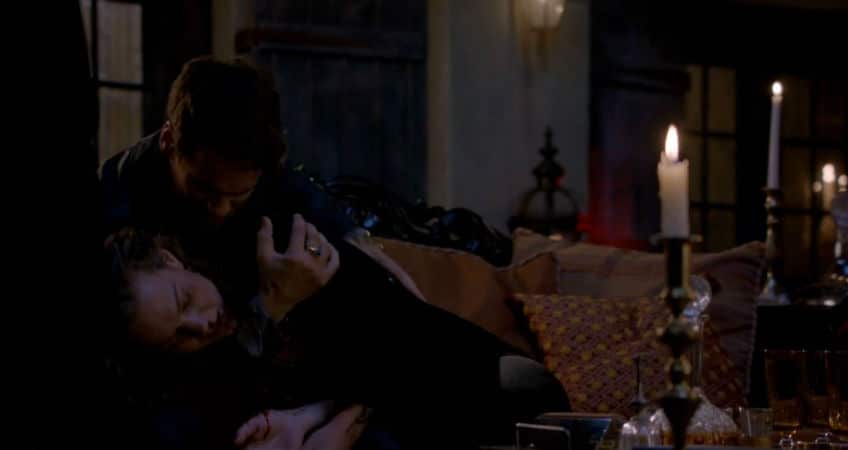 After Alexis wakes back up at the Compound, the group (now including Hayley and Elijah) bites into Alexis to see the full prophecy. Just as we’re about to find out how they all die, they discover that Alexis, the seer has been poisoned. They’re pulled out of the vision coughing and spitting up her poisoned blood, with the seer dying in Lucien’s arms. But who was it that poisoned her?

The alluring and dangerous Aurora, of course. She’s arrived and she’s up to no good. 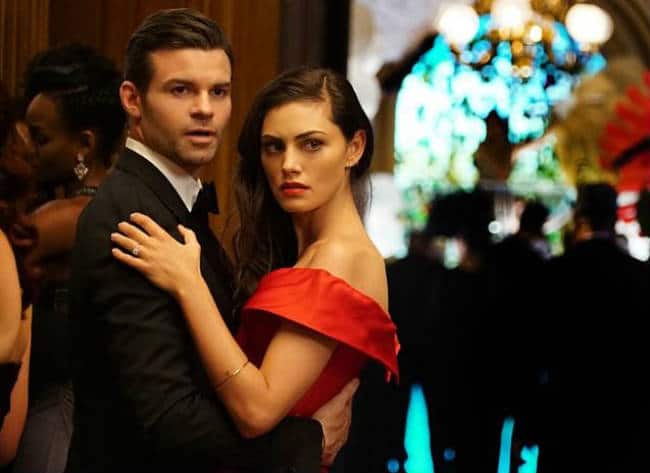 This was definitely a positive episode for Elijah and Hayley fans as their chemistry was put on display scene after scene – making us all question…how long will the marriage between Hayley and Jackson last? Despite Hayley being unavailable, the chemistry between Hayley and Elijah continues to be palpable.

However, the actual standout moment (or moments) was the dance between Elijah and Hayley at the masquerade party on top of Elijah’s jealous stare when Hayley danced with Tristan. 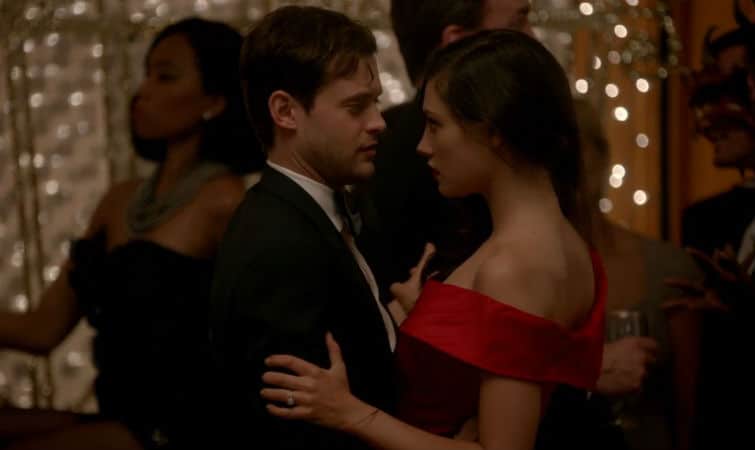 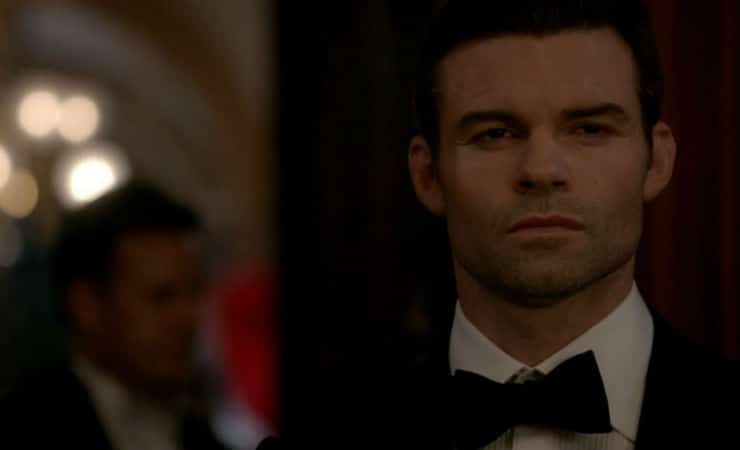 If there’s one thing I love about period dramas and paranormal/urban fantasy series, the good ones know how to pull off the smoldering stare. It’s all about the looks and the little moments.

Personally, I hope to see more scenes like these ones in the future. 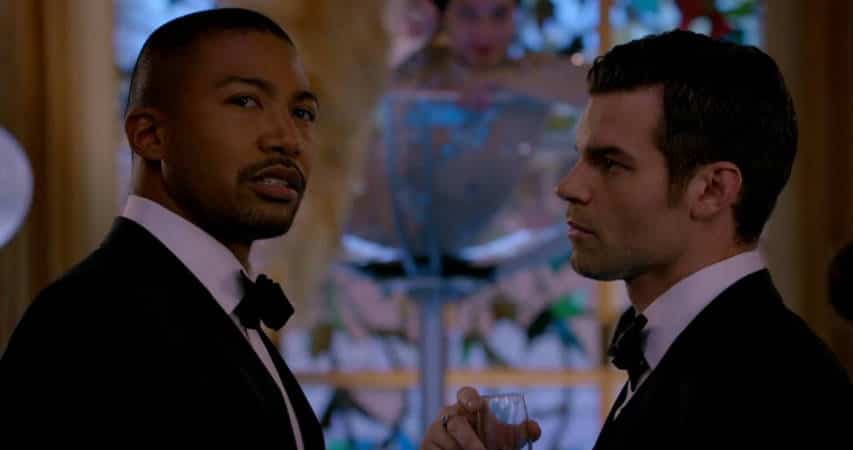 Elijah: These options, as you describe them, are a death sentence. I suppose I shall have to intervene. It is a shame. I expect it shall ruin my tuxedo. I have had this suit for over a hundred years.

My impossible Moonlight theory aside (though still possible technically; Bones/Sleepy Hollow anyone?), I am still convinced that it’s an outsider who is the real threat and not Lucien, Tristan or Aurora. Someone’s trying to start a war by turning the sire lines against each other and I can’t wait to find out who that is. Right now, my money’s still on Detective Kinney! Who do you think the serial killer is?

Also, any conspiracy theories in mind connected to The Strix? The ideas are endless with the introduction of this mythology to the series.

Well, what did you think of “A Walk on the Wild Side?” Let me know in the comments.

Our romance-themed entertainment site is on a mission to help you find the best period dramas, romance movies, TV shows, and books. Other topics include Jane Austen, Classic Hollywood, TV Couples, Fairy Tales, Romantic Living, Romanticism, and more. We’re damsels not in distress fighting for the all-new optimistic Romantic Revolution. Join us and subscribe. For more information, see our About, Old-Fashioned Romance 101, Modern Romanticism 101, and Romantic Living 101.
Pin this article to read later! And make sure to follow us on Pinterest.
By Amber Topping on October 30th, 2015

2 thoughts on “The Originals: A Walk on the Wild Side Recap – A Masquerade and an Initiation”