This week on The Originals in “A Streetcar Named Desire,” The Vampire Diaries/Originals crossover continues with Stefan helping the Mikaelsons fight the Strix and ultimately defeat them. This was a beautiful episode of The Originals, in fact, it was one of the best of the series. Many foes were put to an end this week with more questions left in the process. For now, though, the characters get a little rest and relaxation from their enemies. (Until new ones are bound to appear next week.) But not without some real loss and setbacks. 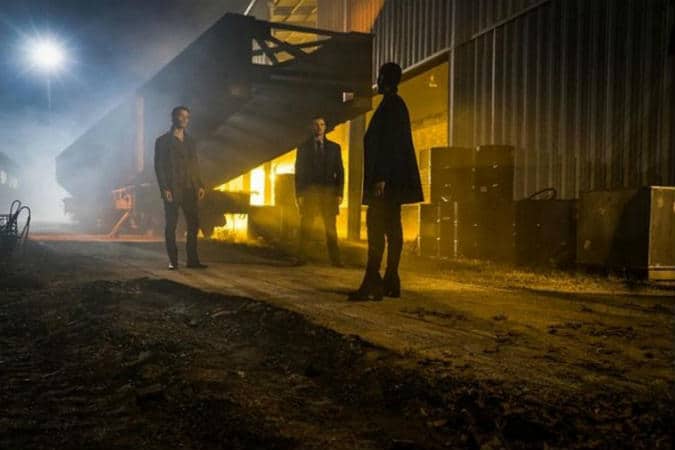 Aya traps Klaus and Elijah inside a magical prison in “A Streetcar Named Desire” using representational magic. Inside the same Chambre de Chasse is Aurora and Tristan. They are part of the plan to keep Klaus and Elijah there long enough for Davina to successfully pull off the de-siring spell. Apparently, Aya and the Strix have still been working with Tristan since he’s been dropped in the ocean. Aya’s coven of witches put together a spell that keeps his mind in a place that prevents him from feeling the pain of drowning.

In the magical prison, Aurora messes with Klaus’s psyche and uses venomous words against him (IE: hurting him by bringing up Cami). But Elijah plays defense and strikes a few of his own wounds.

And as Klaus and Elijah struggle to figure out the object that binds them there, Aya has Davina working toward breaking the sire link with a nearly impossible spell. Aya’s plan is to delink Klaus and then play a test run by killing Klaus with the white oak. From there, Elijah would be close behind.

THE END OF A WAR

After Klaus saves Stefan’s life over on The Vampire Diaries, he brings Stefan to New Orleans to have Freya help him. Freya gives Stefan a magical ointment that will help conceal him from Rayna, the huntress hunting him.

Trouble isn’t far away, though. Klaus and Elijah are attacked by Aya and put into a prison. Thankfully, Stefan offers to help. While Stefan and Hayley break into the Strix compound to rescue them with the help of Marcel, Freya uses Lucien (who has been tied up and locked away by Aurora) to break inside the magical prison (using all of her magic and his) to save them.

And just as Freya breaks into the magical prison to help find the object that represents them, Aya slits Klaus and Elijah’s throats. Time is running out.

At the last minute, Klaus figures out that the objects that represent them are the Queens – symbolizing the women they’ve betrayed (this was an awesome twist with some truth to it). Freya is able to break them from the spell, but not entirely in time. Elijah awakens and kills a few of the witches and Strix with the help of Hayley and Stefan.

Elsewhere, the Huntress figures out where Stefan is for a short window and accidentally ends up helping Stefan and the Mikaelsons. She kills a bunch of the Strix in her search to find Stefan. But, alas, he’s able to get away while many of the Strix are slaughtered.

Meanwhile, Klaus wakes and tries to attack Davina – but despite Marcel trying to tell Davina to stop doing the spell – she continues anyway. She uses all of her power, holds Klaus off and finishes the spell. 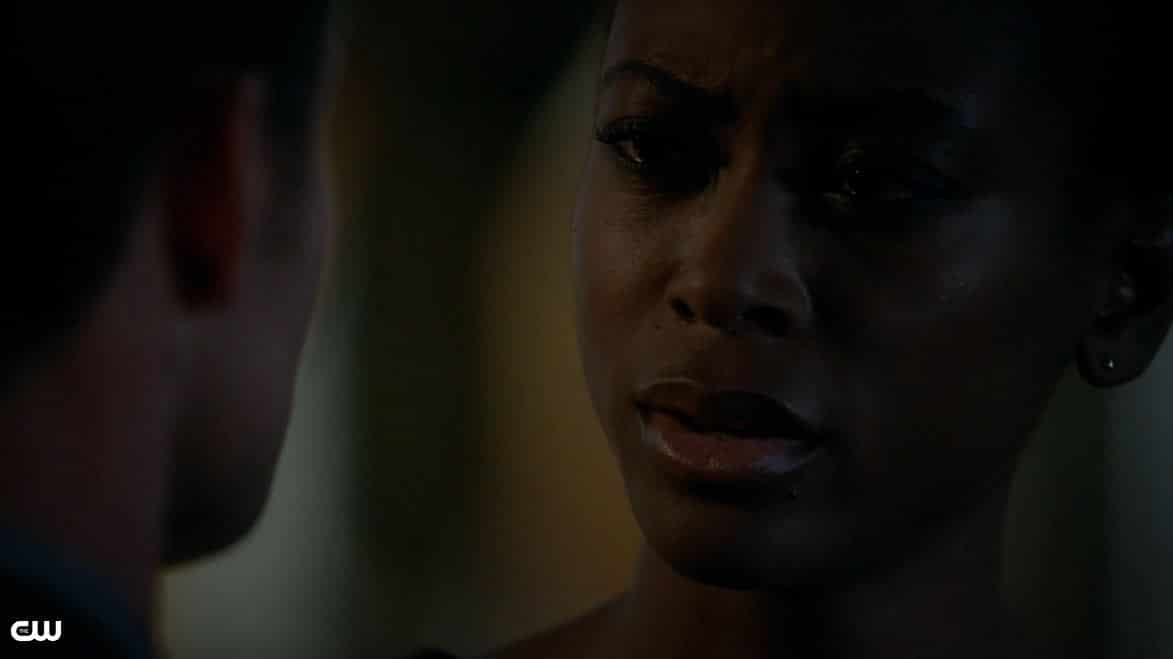 After suffering a loss, Elijah approaches Aya to discuss her failure as well as her betrayal. They share a poetic conversation with Aya really making a fair point. She was forever chained to a man who had abandoned her and was willing to do whatever it took to be freed from him. Ultimately, she failed. While Elijah empathizes, he cannot forgive her for what she’s done to his family. He attempts to kill her but finds he can’t go through with it. But, someone else can. Hayley stakes Aya, taking vengeance for her husband Jackson.

Elsewhere, Aurora and Tristan are ripped from their magical prison as it crumbles to dust without the help of the Coven keeping it in place. Tristan begins to drown as he says his goodbyes to Aurora. He returns to the ocean while Aurora wakes up to find herself inside a prison of her own. Klaus gets his own vengeance against Aurora by trapping her inside a brick wall leaving her to be eaten by worms. He feels death would be too merciful.

In a nice twist at the end of “A Streetcar Named Desire,” Davina finally gets what she wants and resurrects Kol. If there’s one thing you can say about Davina, it’s that she’s consistent. She got almost everything she wanted this week. Davina was able to punish Klaus and bring back her boyfriend. Unfortunately, there is a little side effect of a rift between her and Marcel. Well, you can’t have everything.

Klaus: You once told me you wanted to use her head as a footstool…Why wait?

Elijah: Our second rate Napoleon desperately trying to leave his mark on the world with those filthy little claws.

Aurora: I do like seeing how hard you work to save the few who still care about you. Elijah…Cami…Oh, it’s a pretty short list.

Aya: If your life were chained to a man who left you despite your devotion, what choice would you have but to break free? 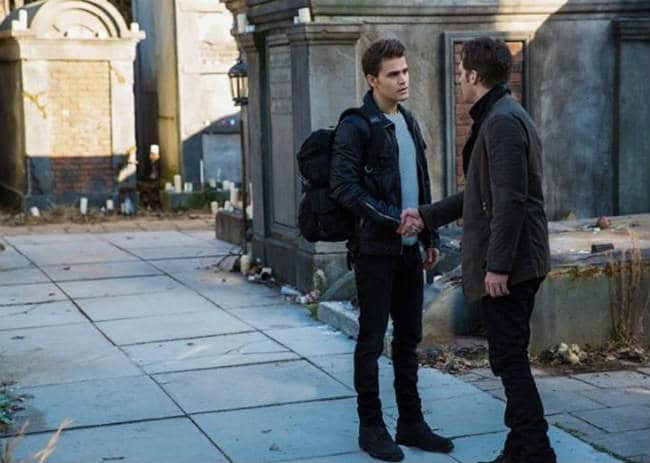 Based on the crossover elements on The Vampire Diaries tonight, we should assume that both shows will be flash-forwarding the story to three years in the future – or present day. What will this mean for the prophecy? And what has happened to Klaus and the rest of the characters? Right now, it doesn’t seem good.

Love them or hate them, what did you think of the phone call between Klaus and Caroline over on The Vampire Diaries? I thought it was nice to see Caroline finally realizing she doesn’t actually hate Klaus. He gave her some sound advice as well and proved that he really does understand her better than even the people closest to her. It was nice to also hear their relationship come full circle on The Originals in a few of the conversations between Stefan and Klaus. Will they both let the women in their lives go to keep them safe? One could also argue this was closure for the Klaus and Caroline relationship. Or one could also argue that three years in the future (probably present day to us), there could be more coming between these two. That said, I do believe his heart belongs to Cami right now, but that he will always have a strong love and affection for Caroline.

What do you think is next now that Aurora and the Strix are stopped for a while? With Aya, Aurora and Tristan ruled out as the Big Bad, who is left? Could it be Lucien? Freya? Detective Kinney? Or another character? We shall see! The prophecy still has to happen after all.

Well, what did you think of “A Streetcar Named Desire?” Let me know in the comments.

Our romance-themed entertainment site is on a mission to help you find the best period dramas, romance movies, TV shows, and books. Other topics include Jane Austen, Classic Hollywood, TV Couples, Fairy Tales, Romantic Living, Romanticism, and more. We’re damsels not in distress fighting for the all-new optimistic Romantic Revolution. Join us and subscribe. For more information, see our About, Old-Fashioned Romance 101, Modern Romanticism 101, and Romantic Living 101.
Pin this article to read later! And make sure to follow us on Pinterest.
By Amber Topping on February 27th, 2016

8 thoughts on “The Originals: A Streetcar Named Desire Recap – The End of a War”