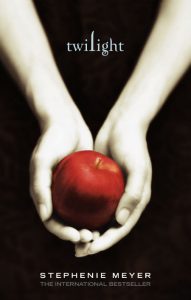 In celebration of Banned Books Week, going on now through September 28, I thought I’d compile some of my favorite books to highlight from the recent lists of most banned/challenged books of all time as well as talk about what book banning may mean in today’s world.

Banned Books Week was started in 1982 and is sponsored by the American Library Association (ALA). The campaign celebrates the right to read as well as highlighting specific banned or challenged books.

Personally, I’ve always been uncomfortable with the idea of book censorship. It’s a slippery slope once begun. I also don’t agree with changing classic novels to make them less offensive to modern readers (IE: Re-editing The Adventures of Huck Finn to take out offensive words). A novel represents the time it was written and the person who wrote it. I don’t think we should re-write history just because it makes us uncomfortable. Do I enjoy reading racist phrases in books? No. But I also understand it was written in a different time. Context is everything. There’s no need for me or anyone to actually be offended. How can we interpret a novel written in the 19th century for instance through a modern lens? You can’t realistically expect for someone from a different time to think as we do today; because frankly, they didn’t.

Can you imagine what would happen if certain individuals suddenly had the power to edit books we love to suit their own interests and eventually those would be the only copies available? Yeah, not something I ever want to see happen.

Now, while many of us claim to promote the right to read what we choose, there is another element of book banning many of us ignore. And that’s when academics, critics, readers all decide to point out “why” a book is “inappropriate” to read without literally making a formal complaint. Twilight, for instance, doesn’t send out the “right”message to girls.

Have we become in our discussion of what is appropriate and inappropriate in a modern novel clouded the author’s own freedom of speech?

Our new age of censorship then is not about banning, but rather judging and condemning too quickly.

Our new age of censorship then is not about banning, but rather judging and condemning too quickly. As a writer, do we feel we “must” be politically correct so as not to offend? Most of us accept that a book written two hundred years ago is going to have a different perspective on the world than say someone now. But today oftentimes certain things are expected of writers. Is it not small-minded to try and control what is acceptable and not in a modern story? Shouldn’t we be criticizing the writing, not the message of the content we may or may not disagree with?

I think it’s a mistake to try and group all modern people into a box. We come from different backgrounds, cultures, ideologies, etc… and therefore will have a different voice all worthy of being heard because it represents our truth. Does that mean we have to agree with someone else’s truth? No. But since when couldn’t a story just be a story?

People are flawed, why then can’t characters be? And why do the critics or even fellow readers feel the need to decide for us what is appropriate or not appropriate to read?

If we look back on history, men felt it was their right to control what women read. Gothic novels, for instance, were bad for the women’s fragile mind. It would give them “ideas.” (Jane Austen parodied this in Northanger Abbey for instance about the “danger” of reading gothic novels). Now, here we are a few hundred years later and we’re still doing the same thing.

We judge gothic novels (sometimes presented as paranormal romance, urban fantasy, etc…) and argue that it sends out a bad message. In a way, we’ve decided to censor by saying that only certain types of female characters should be present in teen books or even “women” books (we must be so fragile as a sex that we can’t actually recognize fantasy when we read it).

The new age of book banning is akin to cyber bullying. You may not see the book burn, but you’ll feel it.

The new age of book banning is akin to cyber bullying. You may not see the book burn, but you’ll feel it. Society has decided what is “good” and “bad” for you to read and they’ll let you know it. Then introduces said guilt complex about reading specific books because it’s been culturally and popularly banned.

“You read Twilight?” one person questions, the obvious condescension and judgment in their voice. What then happens to some is a feeling of guilt and shame. How stupid must you be for enjoying a book everyone else argues is rubbish?

…at times our original opinion of a work is questioned and then oftentimes tossed into the pile of books ready to be burned in the pile of popular opinion.

And then at times our original opinion of a work is questioned and then oftentimes tossed into the pile of books ready to be burned in the pile of popular opinion. Bella, don’t you know, doesn’t represent a “proper” modern female and therefore Twilight should be “banned” or at least ridiculed to the point where one feels shame because they liked it.

It has become the mission of some to “challenge” a story they feel strongly against. And the definition of a literal challenge in connection to banned or challenged books is:

“A challenge is defined as a formal, written complaint, filed with a library or school requesting that materials be removed because of content or appropriateness.”

While we may not be filing an official complaint are we not still doing the same thing by placing a stigma around a book? Of course, there will always be criticism, and that is just and fair. But it’s when we turn to attacking others for enjoying a book that I have the problem. The cultural “banning” of Twilight (it has literally also been on the official banned/challenge booklist for a few years) for instance is problematic because too many people have decided it’s inappropriate for a modern audience, because Bella is apparently a horrible female character who sends a bad message to all women everywhere, particularly a “suggestive” female one. Oh and Edward’s “abusive.” (Why people can’t recognize he’s actually just embodying the traits of a Byronic Hero is beyond me). I can’t even count how many academic articles I’ve seen on why Twilight is a book that shouldn’t be read because it’s “dangerous.” And many of this coming from other women (and sometimes even other authors).

So teens then should only read books that give them an example of a politically correct modern girl, right? (How are we still teaching Romeo and Juliet in school then if that’s the case? Yes, I can already hear your argument. They die in the end so it’s okay. But what about Wuthering Heights? The two selfish characters end up together in death. What “message” does that send?) And who exactly decides what that modern girl should look like? Romance, unless presented in the way society approves (though I’ve yet to see that many who understand the urban/paranormal romance genres), is bad for the women’s soul. It gives them dangerous “ideas.”

Uh oh. We sound like the men from 250 years ago.  How non-progressive of us.

I did a google search on “why girls shouldn’t read Twilight” and this is what popped up on the first page. I took a screenshot: 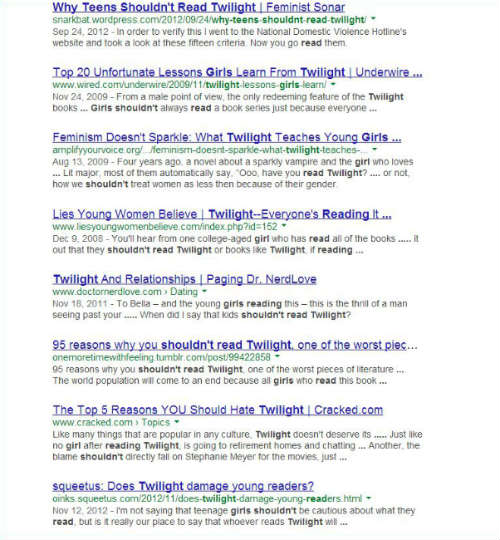 I know what I’m saying is a bit extreme (and I’m not saying we all have to like the same books; certainly we can hate something and share why), but being someone who doesn’t like to be told what to read, especially since I’m not living in the 1700s, and in connection with Banned Books Week, I argue this point. As a society, today do we really want to sound like the men of yesterday?

I choose to be Eve in the Garden of Eden and take a bite out of the forbidden fruit of a specific “culturally” banned book despite the “dangerous” knowledge that may come with it.

I don’t know about you, but I choose to be Eve in the Garden of Eden and take a bite out of the forbidden fruit of a specific “culturally” banned book despite the “dangerous” knowledge that may come with it.

Anyway, we live in a modern age where information is available at our fingertips, yet all of these books below made the top lists of the most challenged or banned books ranging from 1990-2012. And they made my top 10, well because I love them! Some of the books on the list may surprise you.

Check out Why Reviews Should Rate by Genre

Read So You Love Vampires

Don’t miss Why Happily Ever After Deserves Our Respect

Look at the Top 20 Bad Boys – Byronic Heroes in Film

Our romance-themed entertainment site is on a mission to help you find the best period dramas, romance movies, TV shows, and books. Other topics include Jane Austen, Classic Hollywood, TV Couples, Fairy Tales, Romantic Living, Romanticism, and more. We’re damsels not in distress fighting for the all-new optimistic Romantic Revolution. Join us and subscribe. For more information, see our About, Old-Fashioned Romance 101, Modern Romanticism 101, and Romantic Living 101.
Pin this article to read later! And make sure to follow us on Pinterest.
By Amber Topping on September 26th, 2013

5 thoughts on “The New Age of Book Banning”