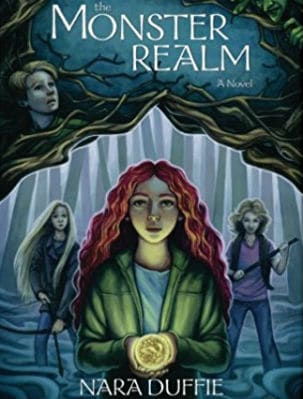 Author Nara Duffie started her first novel, The Monster Realm when she was nine.  It went on to win several awards, including Books and Author’s Book of the Year in the category of Juvenile/Teen/YA and is a Next Generation Indie Book Award Winner.

The Monster Realm starts in the town of Spring Town and moves to Lanodeka, the Realm of the Monsters. We first meet Lillian and her sister Bluebell. Soon, Bluebell disappears from the local beach, leaving no trace. Two years later, Lillian gets a feeling that she should go to the beach to find her sister. With her two best friends, Katy and Maisy, Lillian goes to the beach.

At the beach, they meet Jack, a mysterious boy who says that he can take them to Bluebell. Determined to find Bluebell, Lillian, and her friends go with Jack to the Realm of Monsters. Here they face Medusa, Wood Elves, a Kraken, and other mystical creatures before learning the truth about Bluebell’s disappearance. While there, Lillian learns that things are not what they seem in the Realm of Monsters. She also discovers that her family has a huge secret. When she does find her sister, Lillian has to make a choice that will change her life, and the world, forever.

Although Lillian is the main character, her best friends Katy and Maisy are also very important. Lillian, Katy, and Maisy are all different girls. Lillian is more adventurous and imaginative than her friends, and she is determined to save her sister. She loves monster movies and Greek mythology and seems to have been in training for this adventure her whole life. She is a character that is wonderful to watch grow as the story unfolds.

Meanwhile, Maisy is fearless, willing to jump headfirst into danger. She is the character who makes sure that there is food, and she is not afraid to take action. She’s a little suspicious of strangers but is also willing to leap into new situations. Sometimes, she doesn’t seem to realize that there might be a second way to do things. She also hates hugs, is more eager for a fight than the other two, and knows how to pick locks.

Katy is an imaginative girl who is afraid of getting in trouble. She’s a poet, and takes time throughout the story to write out poetry about the adventure. Katy is more cautious, but she is also caring and a strong character in her own right. She does not particularly want to go on this adventure, but she knows it’s important to her friend, so she goes. She is the one who frees the chimera and figures out the way to save Passiflora the dryad.

All three girls are different, but they all love each other and are willing to fight for each other. Ms. Duffie takes the reader into the mind of each girl. As a result, we able to see three different sides of the story, and we also get to learn about each girl. This keeps the story more balanced between the three.

The story of The Monster Realm is exciting and the plot is always moving forward quickly; it is beautifully fast-paced. Honestly, I didn’t see the twist at the end of the story coming, and that was exciting; I love it when a story surprises me! The buildup is there and it unfolds beautifully without being too obvious.  The land of Lanodeka is laid out well, and the book has a map, something that I love in my books.

Ms. Duffie’s writing style is fresh and fun. It managed to be funny and serious and poignant, all at once. The characters are believable and enjoyable to read about, the story is well thought-out, and the setting is magical. The only thing I did not like about this book was that it ended on a cliffhanger. I went out and bought the sequel, though, and I’m looking forward to reading it.

If you enjoyed Rick Riordan’s books about Percy Jackson and his friends, classic monster movies, or stories with compelling characters, you will probably enjoy The Monster Realm. Available as a Kindle ebook and as a paperback on Amazon, reading it is a fun and exciting way to spend an afternoon. A brilliant story by a talented young author, The Monster Realm is well worth the read.

I think that The Monster Realm would be a wonderful film. There could be some wonderful CGI and practical effect combinations because the world in the story is well-crafted and magical. Casting-wise, I think that Jane Levy is the right idea for Lillian (though a little too old to be twelve), while Molly Quinn could be a great Bluebell. When it comes to Katy and Maisy, I have the same problem as with Lillian. Elle Fanning fits how I picture Katy, and a blond Bailee Madison fits how I picture Maisy. For Jack, I picture Thomas Brodie-Sangster. However this movie works, Ms. Duffie should be very involved in the creative process of bringing her magical world to life.

Our romance-themed entertainment site is on a mission to help you find the best period dramas, romance movies, TV shows, and books. Other topics include Jane Austen, Classic Hollywood, TV Couples, Fairy Tales, Romantic Living, Romanticism, and more. We’re damsels not in distress fighting for the all-new optimistic Romantic Revolution. Join us and subscribe. For more information, see our About, Old-Fashioned Romance 101, Modern Romanticism 101, and Romantic Living 101.
Pin this article to read later! And make sure to follow us on Pinterest.
By Bailey Cavender on June 6th, 2017