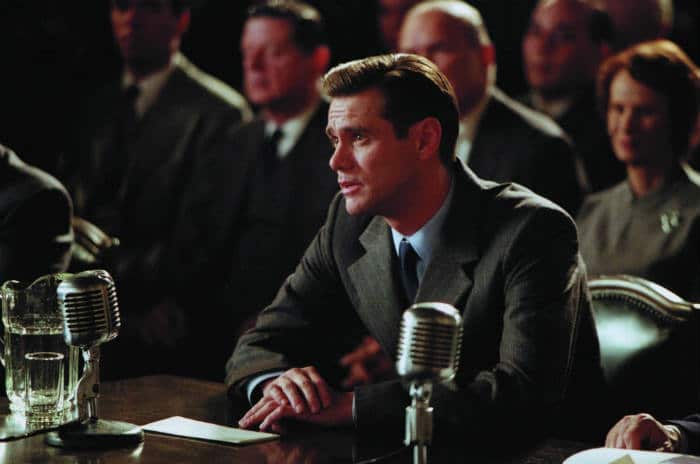 Some films don’t fit inside the customary period drama box. This 2001 film starring Jim Carrey is one of those films. Truly, The Majestic is absolutely gorgeous, but it has a script that breaks rules and is sometimes too busy because of this. The Majestic is one of those films that played on my TV more than once during my younger years (my VHS tape can attest to how long ago that was; I’ve finally upgraded to Blu-ray) and until this month, I’d not revisited it for a number of years. While rediscovering it, I found it far more impactful and important than my teenage self ever did.

Set in Hollywood, the story opens with scriptwriter Pete Appleton (Carrey) making his mark in Hollywood. His first credit has just opened at the box office, and along with its leading lady who is also Pete’s girlfriend, the couple is living their Hollywood dreams. However, Pete’s world is about to come crumbling down when he’s accused of having communist ties and after a night of drinking, he plunges his car into a storm-tossed river.

Waking on a beach, he has no memory of who he is or how he ended up lying in the sand. He winds up in a small town that lost some 60 young men during the war. Lawson resident, Harry Trimble (Martin Landau) welcomes Pete as his son, Luke, trying to help Pete remember a past that isn’t his. Reported missing in action some nine years earlier, Luke’s body was never recovered. Suffering so much, everyone in the small town of Lawson California is eager to believe this stranger is Luke because they need him to be alive. Including his fiancée, Adele (Laurie Holden)… 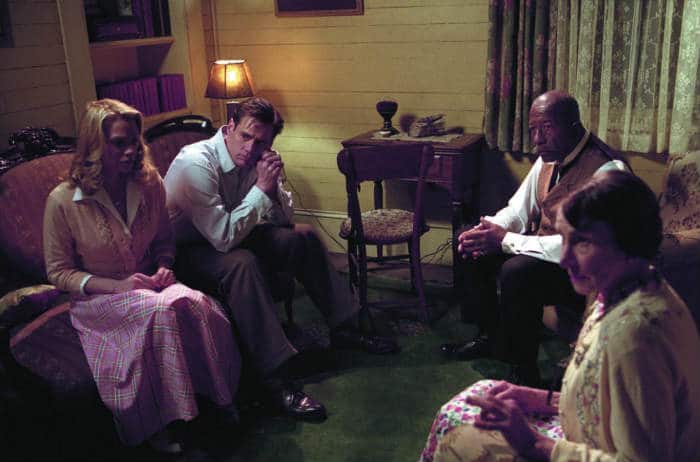 In a time when communism was most likely considered a betrayal of the worst sort, this film challenges what it means to be a free America. The writer has a lot of puzzle pieces to fit together, which he does seamlessly without being melodramatic. The Majestic does tend to get a bit murky in places (simply because there is a lot of story going on)and runs (in my opinion) slightly overlong. Clocking in at over two hours, it would have benefited from a shorter length though pinpointing what could have been trimmed I couldn’t say, but beyond this, I think this one is absolutely wonderful. 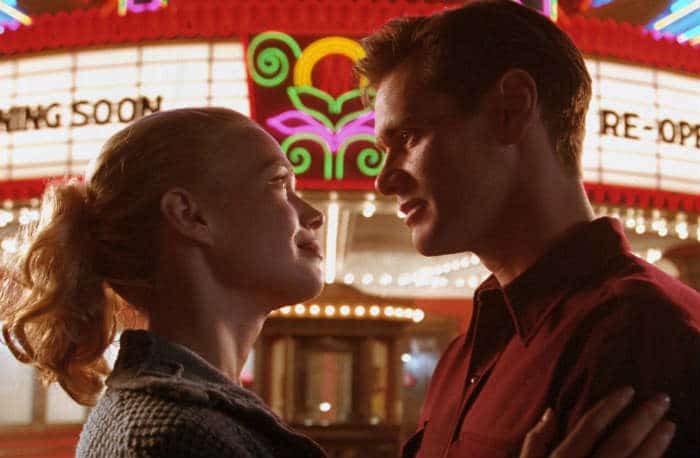 The poignant script strips away any character inhibitions because, in turn, it forces each of them to face a past or future and rectify their fears and errors. The characterization is nicely fleshed out which lends more credence to genuine character interactions and the journey we walk with them. I also appreciated the importance (a memorial “love letter” of a sort) centered on the war and the men who died. Add in the swinging 50s-era fun (lots of amazing music!), romantic moments (of which there are more than one) and the emotional questions Pete eventually chooses to inspire and The Majestic is worth a Saturday night in. Especially for anyone who may enjoy dramas like Grantchester or Call the Midwife both of which have a similar time frame although by and large, The Majestic is a lighter-hearted piece of cinema.

You can rent The Majestic on Amazon Video or buy it on Blu-ray. The film is rated PG.

Do you have fond memories of watching this 15-year-old drama? What did you think of Carrey in the leading man role? Share your comments below. I’d love to read them.

Our romance-themed entertainment site is on a mission to help you find the best period dramas, romance movies, TV shows, and books. Other topics include Jane Austen, Classic Hollywood, TV Couples, Fairy Tales, Romantic Living, Romanticism, and more. We’re damsels not in distress fighting for the all-new optimistic Romantic Revolution. Join us and subscribe. For more information, see our About, Old-Fashioned Romance 101, Modern Romanticism 101, and Romantic Living 101.
Pin this article to read later! And make sure to follow us on Pinterest.
By Rissi JC on March 19th, 2016