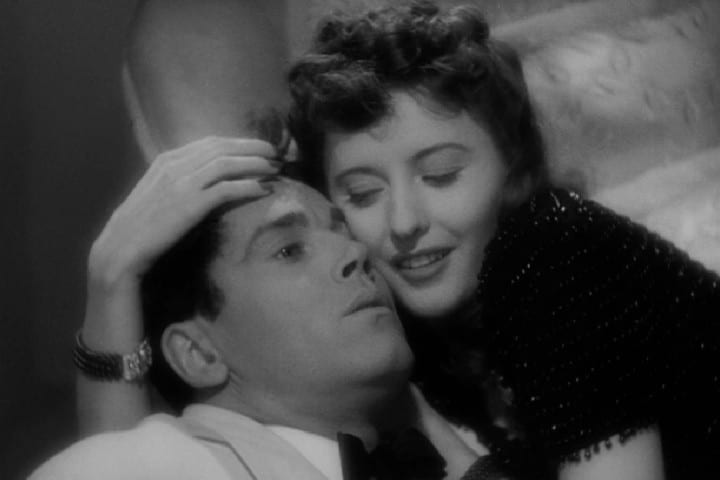 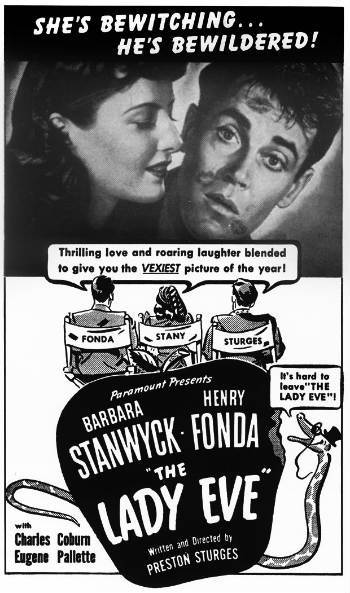 The Lady Eve is 1940’s screwball comedy at its best. It’ll have you in stitches from start to finish, while also carrying some important messages. Henry Fonda is adorably awkward as he stumbles over furniture as well as his words. Meanwhile, Barbara Stanwyck is the ultimate temptress with a heart of gold.

The Con-Artist and The Sucker-Sapien

Barbara Stanwyck plays Jean, a beautiful con-artist who excels at reading people as all good con-artists do. She travels with her father and his friend and together they take advantage of rich Sucker-Sapiens who, according to them, already have everything they need.

Enter Charlie Pike/Hopsie (Henry Fonda), a perfect specimen of a Sucker-Sapien. He is a rich eligible bachelor who has his nose in books about snakes and prefers the company of reptiles to women. There are continuous hints at the story of Adam and Eve, the bite of the apple of knowledge, Eve tempting Adam and the subsequent fall of man. Just in case the theme of The Fall isn’t clear, poor Henry Fonda stumbles over something every few minutes just to remind the audience of the connection. His wide-eyed deadpan portrayal of Charlie Pike is just wonderful. It’s easy to see why Jean becomes so smitten with him!

Related Post: Vintage Film Review: It Happened One Night (1934) – The Classic Journey of Falling in Love

The beauty of Barbara Stanwyck’s character is in her contrast and duality: She is a con-artist, yet she too yearns for a relatively simple life and to fall in love.

“What’s the sense of having (an ideal) if you can’t ever find him?”

She is an excellent seductress but is clearly more innocent than she appears. She knows exactly what she is doing to Hopsie with her flirtation. Yet, when he tries to kiss her, she exclaims that he should be kept in a cage! She is full of contradictions and she knows it. She is an intelligent woman who knows what she wants, but also a little girl afraid of where this could lead.

A whirlwind romance with a stranger on a cruise – It’s the stuff dreams are made of, n’est-ce pas?

“They say a moonlit deck is a woman’s business office.”

One can certainly learn a thing or two about seduction from Jean. She is certainly the show runner of this film. As soon as she sets her eyes on Hopsie, we know it’s only a matter of time before she reels him in hook, line, and sinker! As an heir to the Pike Ale fortune, all the passengers ogle Hopsie and flutter their eyelashes at him seeing him as nothing but a big pile of money. It makes one wonder at the difference between this type of gold-digger and the con-artist kind. Aren’t they both ultimately after the same thing?

The difference between them and Jean is that they try to trick him into making the first move as they play the innocent maiden card. Jean, on the other hand, simply takes Hopsie by the arm, demands that he accompany her to her cabin, and the rest is history! They are like an old married couple from their first interaction with each other. 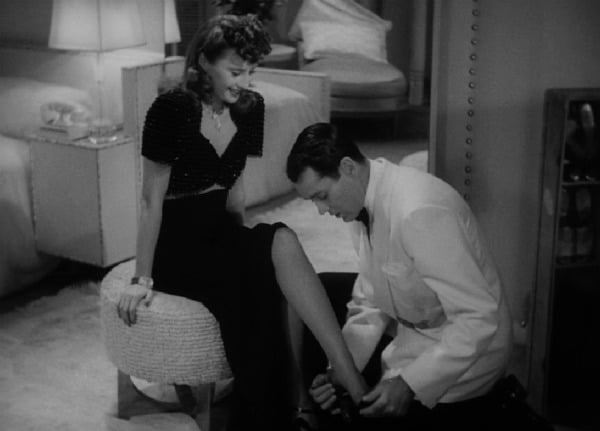 There must come a point at which Jean’s identity as a con-artist is revealed. The past, no matter how far removed or recent, always seems to catch up to characters in film. That is the only way they can be redeemed or learn from past mistakes, after all! Every story needs conflict. So, when the inevitable happens, we get to one of the biggest lessons of the film:

“You see, Hopsie, you don’t know very much about girls. The best ones aren’t as good as you probably think they are and the bad ones aren’t as bad. Not nearly as bad.”

Jean sets out to prove her point to Hopsie and tests his patience and preconceptions in the process. It’s exciting stuff and I recommend that you watch the film to find out how she goes about it! This film tackles duality beautifully. Everyone is both good and bad and everything in between. People cannot be sorted into categories, no matter how hard the world and society keeps on trying to show that they can. Even the sorting hat in Harry Potter had trouble deciding between Gryffindor and Slytherin and not just because he spoke Parseltongue. Life wouldn’t be nearly as interesting if things were that simple!

Lose the battle to win the war?

Marion Keene makes an interesting point in her commentary track on what she believes is a central theme of The Lady Eve:

“In order to fall in love, one has to be gullible. Love, not cons, is the biggest con-game. Except, with regard to love, there’s a twist. It’s a con-game that survives best when the women and the men accept that a condition of being in love is being conned.”

There is definitely some food for thought in this statement. If both parties do not agree to give in to a certain extent, they will forever be at an impasse. It wasn’t enough when Mr. Darcy swallowed his pride and made the first proposal of marriage to Elizabeth Bennet. Only when they both set aside their pride and prejudices did they finally find it in themselves to make a step forward towards a shared future.

In order to win at love, one needs to allow oneself to lose at it first. Both parties need to give in to be able to love each other fully. Could it be that the lose the battle but win the war concept applies to romantic relationships as well?

The Lady Eve is definitely worth watching, be it just for the laughs, for the romance, for the interesting ideas the film explores, or for everything at once. This film is not one to be missed by fans of Cary Grant type films or romcoms in general!

Content note: Even though The Lady Eve is unrated, I’d say it’s at about PG/ PG-13 level. Hollywood, take note! This is how one makes sexy films. It’s all about a seductive glance, and a flirtatious line. Nudity and explicit scenes could never compete with great content like this!

Where to watch: Watch it using streaming services such as Amazon Video, YouTube, and Google Play.

By Yaroslavna Simdyankina on August 16th, 2017