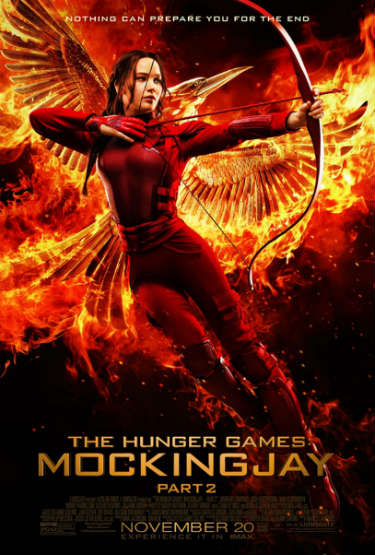 The worldwide phenomenon that first burst into our world as a YA dystopian trilogy (some seven years gone) followed by its subsequent films has finally drawn to its close with Mockingjay Part 2. Since nearly all young adult adaptations make a trilogy more complicated (not to mention drawing the saga out) by splitting the final book into two parts, this franchise figured it best do the same. We saw part one released back in 2014 and now, in 2015, we’re seeing how Katniss Everdeen’s story concludes.

Katniss Everdeen (Jennifer Lawrence) is shattered following the Hunger Games and her second brush with death in the Quarter Quell. Her psyche has just been dealt another crushing blow, a trauma that might just be her undoing. District 13’s team of soldiers rescued the remaining victors, including Peeta (Josh Hutcherson) from the Capital. He’s been returned to Katniss but trained as an assassin with one target: Katniss. This inspires the rebel district of 13 to restrain Peeta in case he does harm to their symbol of the rebellion, the Mockingjay. 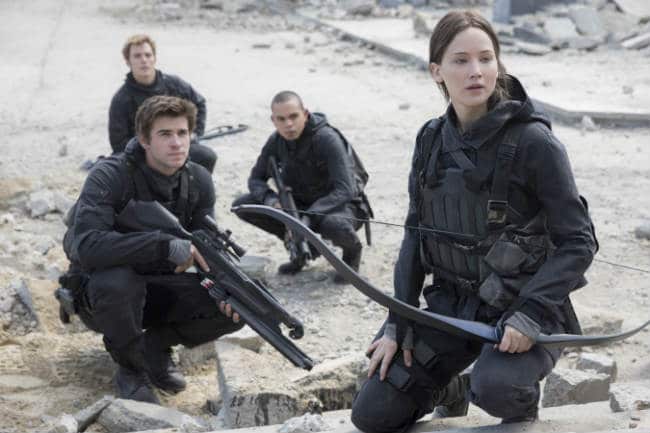 Meanwhile, President Snow (Donald Sutherland) persists in his end game of destroying Panem and more presently in his sights is Katniss, the girl on fire. His dislike of her is as strong as ever especially now her numbers among the surviving district residents continue to grow under the guidance of President Coin (Julianne Moore), District 13’s leader. The rebel nation of 13 makes plans, great plans to end the Capital’s reign even as Katniss plots in silence to end her tormentor. To make a stand, 13 have need of their Mockingjay. With one final arrow, Katniss’ last stand comes with a price, but more than that, it forever changes the power struggle of Panem.

The Hunger Games can be coined as an iconic series. Written by Suzanne Collins, the series is as popular today as it was upon its debut (perhaps more so). Driven up by its blockbuster movie sales and wide promotion, this final film was a prime example of excessive promotion. It was everywhere – from banners on film websites to TV spots, and it was hard to shut it out. I saw both the first two films in a reasonable amount of time following their release to DVD yet only recently sat down to watch Mockingjay, Part 1 in anticipation of seeing this in theaters (which was a first for this franchise). Having now seen both, I think I can safely say (though it wasn’t intentional) that watching both so close together was more rewarding.

Unfortunately, Mockingjay buckled to the pressure of splitting into two parts. I think by and large, I would agree with those who feel that wasn’t necessary. An effective and well-produced finale could have been achieved in one two-hour script. Having said my piece about that, and putting that aside, the concluding narrative in this epic series is really cinematic excellence. After four years, the scripters and actors seem to have a layered understanding of the material and world building. None of the writers have many credits to their name, but in collaboration with Suzanne Collins, the script is brilliantly adapted for the screen. The two parts do follow the book extraordinarily well with exception to some minor changes. 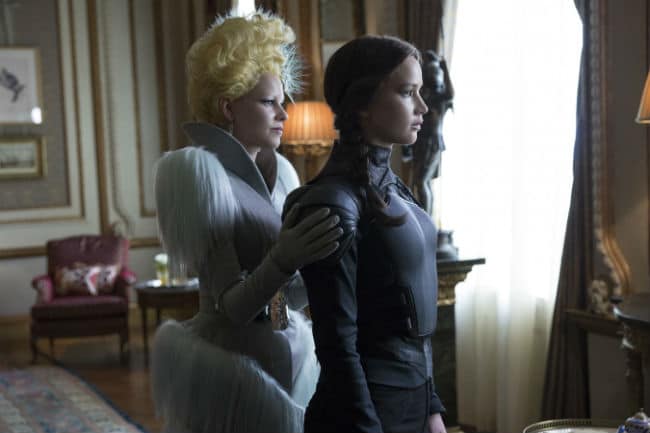 Keeping pace with the prior films, the entire cast is on point. Josh got more (well deserved) screen time and what started with Liam’s Gale in Mockingjay, Part 1 continued to grow here. I never felt really “bonded” to him or loyal because he always seemed a present figure rather than relevant character. In this, I loved what I saw of him and if I’m being honest, I think his character (in consideration of the entire series) was possibly the most developed. Returning favorites from Johanna (Jena Malone) and Effie (Elizabeth Banks) to Finnick (Sam Claflin) and Haymitch (Woody Harrelson) also appear though those who’ve read the book will know not everyone surfaces with the happy ending they were due. (British actress Natalie Dormer also returns as Cressida.) Then there is Jennifer Lawrence. My repetitive praise of her performance could be replicated in this review, but instead I’ll merely say this: she is absolutely dazzling in this role. She gives Katniss more layers.

Moving from place to place in this fictional world is always an adventure; the set designers brought to life a magnanimous world that’s terrifying and beautiful in equal nuances. Costuming reflects the moods of its films and continues to be striking, though not as ornate as “Catching Fire,” the final battle scene when Katniss and Gale don their cloaks to reach a destination in disguise were particularly gorgeous. Feelings for the end of the book were of the indifferent variety for me, however, the visual interpretation was beautiful. The reason for this, I think, was getting outside of Katniss’ head. In the book, I didn’t find her to have found any peace or real joy (despite this being a sweet give and take between her and Peeta – “Real or not real?”). Here, seeing her at the end made a difference. Her promise of “someday” gives us a glimpse of what she is still struggling with, but again, here’s where Jennifer Lawrence’s performance helps bring the character full circle.

Minor flaws aside, this blockbuster deserves every accolade it collects. It may be the “it” film everyone is currently raving about (sometimes this is more detrimental than complimentary) to which I’m here to add my voice to. Because of the split films, this does drag in a couple of places (Mockingjay probably could have been cut by a number of minutes and been just as effective) and yet I was still transfixed. There are some beautiful and if possible, joyful moments, all shot to perfection. Anyone who has stuck by this series from the beginning will appreciate this. It’s a long overdue reward for those of us who invested so much in the lives of these shattered and heroic lives.

Have you seen Mockingjay, Part 2? Did you think it was well made; what about the cast, who’s your favorite? Sound off with any thoughts you have. I’d love to chat about this one.

Our romance-themed entertainment site is on a mission to help you find the best period dramas, romance movies, TV shows, and books. Other topics include Jane Austen, Classic Hollywood, TV Couples, Fairy Tales, Romantic Living, Romanticism, and more. We’re damsels not in distress fighting for the all-new optimistic Romantic Revolution. Join us and subscribe. For more information, see our About, Old-Fashioned Romance 101, Modern Romanticism 101, and Romantic Living 101.
Pin this article to read later! And make sure to follow us on Pinterest.
By Rissi JC on November 24th, 2015