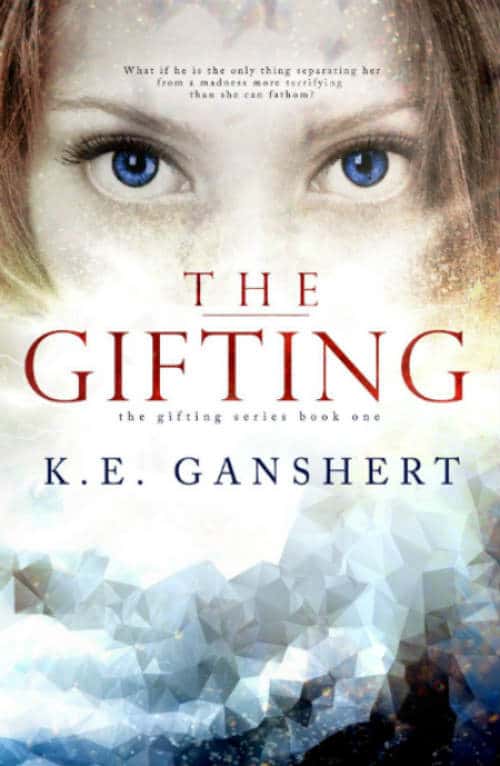 The word dystopian is likely to conjure memories of one particular story, The Hunger Games. In addition to the one that reignited the genre, there are multiple other novels in young adult literature that are well-known and respected, ones that also fall into the dystopian realms. These novels have established big-screen film adaptations and inspired an entire sub-culture. But whether you’re becoming an expert archer through one Katniss Everdeen’s eyes or finding your voice as Divergent, these are all reasons why it’s tough to craft something unique within the larger genre. Chances are, somewhere we’ve seen, heard or experienced “all” of the twists. Reading debut YA author, K. E. Ganshert’s (she publishes inspirational novels under her full name, Katie Ganshert) dystopian novel was something I was thrilled to experience. What I didn’t realize was how very unique her world was going to be.

This story is about 17-year-old Tess. Tess’ life has been a series of cross-country moves. All of which are her fault. Every time she has an “incident,” her parent’s pack up the family and move. This last event involved a séance where Tess saw things, beings that terrified her. Now, there’s a fear she could end up like her mentally unstable grandmother and her parents are prepared to do whatever it takes to combat that. They begin by setting up sessions for her at the Edward Brooks institute. Until then, Tess tries normalcy. Achieving this seems within her grasp when she makes friends with Leela, and the reluctantly popular Luka, a boy who seems intrigued by her.

What separates The Gifting from the pack is its quiet, normal world-building and its relative grasp on realism. This book isn’t about survival in the usual ways. We’re never really certain when this story takes place, only that it’s eerily similar to ours. We do understand this is a dystopian world thanks to mentions of God being eradicated from everything like the Pledge of Allegiance to currency or mention of a war that exceeded 9/11 and Pearl Harbor, both. What the author does with this vision is really, quite amazing! She puts us in a “safe” place full of familiar monikers and pop culture, places and typical teenage rituals only to spark subtle reminders, through the visualization of Tess’ actual reality.

Tess is actually an interesting character because she’s more “afraid” than anything. She hasn’t yet learned how to react to her gift (a gift that is more curse than blessing at this point) and coping with it isn’t her strong suit. She drifts through her terrifying world, a world that, for her is visually insane. What she sees isn’t really there as she envisions things that simply are not there.

Patience and artful story building are where this story’s at. There’s a lot of depth to the potential “bigger picture” because of the former and intrigue thanks to the latter. Ganshert slowly builds up to a terrifying cornucopia of possibilities and it’s that capacity that means there might be more scary happenings to come. With all that’s been said, I haven’t even mentioned Luka. A book simply isn’t complete unless it has a cute guy, and Luka is that and then some. He goes against the grain of normal, and I suspect, his role in Tess’ life is only going to grow. His patience, understanding and genuine feelings for Tess are sweet and totally swoon-worthy… even though we don’t get near enough of these moments.

Readers looking for an inventive perspective on the dystopian world should look no further than this indie novel. It’s gotten some respected endorsements and earned every single one. The heroine floats through her life, which for some readers might distract them from “understanding” her, but knowing this is just one part (there are two more books, one of which is already available to own) of the story, I totally sympathized with Tess’ plight, understanding what she was going through felt anything but normal. Engaging elements of Alice in Wonderland (its heroine is on the precipice of falling into madness) and tossing in some puzzling factors, all guarantees to keep us guessing. As the summer dwindles away, The Gifting is worth adding to your list of possible reads.

Book two, The Awakening is now available for purchase and book three, The Gathering is expected to release in September, and can now be preordered.

Have you read The Gifting? What are your favorite Indie reads? Share any thoughts you have down below.

As previously stated, this really isn’t easily compared to anything I’ve read or seen. But any of the YA book-to-movie adaptations (Divergent, The Hunger Games, etc.) are good recommendations if you like this genre. Also, reflections of Lewis Carroll’s Alice in Wonderland do creep into this story. Perhaps it’s simply because of the “mad” character angle and the fear that our heroine will end up going down the dark hole she fears.

Without question, The Gifting would adapt into a great cinematic story, and would fit into the current film interests of many.

Our romance-themed entertainment site is on a mission to help you find the best period dramas, romance movies, TV shows, and books. Other topics include Jane Austen, Classic Hollywood, TV Couples, Fairy Tales, Romantic Living, Romanticism, and more. We’re damsels not in distress fighting for the all-new optimistic Romantic Revolution. Join us and subscribe. For more information, see our About, Old-Fashioned Romance 101, Modern Romanticism 101, and Romantic Living 101.
Pin this article to read later! And make sure to follow us on Pinterest.
By Rissi JC on August 3rd, 2015

4 thoughts on “The Gifting – A Perceptive, Indie Dystopian Novel”